Birds lay eggs that need to be incubated in order to produce the young. For security during this process of incubation, the majority of species, deposit their eggs in some kind of nest. the nests of many species are constructed with considerable skill applied by the builder.

Others just lay their eggs on the bare ground, the nightjar is one such example among British birds.The simplest nests are made by birds of the plover tribe, such as the lapwing, which seek out or scrape out a hollow in the ground in which to lay their eggs. This hollow may often be surrounded with stones, while other species go a step further and add a few bits of dried grass between their eggs and the bare ground.

Other birds such as the wood pigeon for an example are content to deposit their eggs on a flimsy platform of twigs located in the branches of a tree. More elaborate are the nests constructed by the thrushes which weave a cup shaped nest of dried grasses mixed with mud, cow dung and decayed wood , a mixture, when dry is perfectly waterproof, so that in very wet weather, the mud helps to stop the interior of the nest getting waterlogged which would cause the eggs to become addle.

The chaffinch is a much more skillful architect. the outer walls are constructed of intricately woven with moss, spiders webs and lichen, the interior is lined with horse hair or a similar substance. the use of spiders webs and cotton down and vegetable matter woven into a kind of felt has been adopted by many species of small birds throughout the world. The use of spiders webs to attach lichen to the outer walls is a devise employed by birds in many countries.

The British long tailed tit is a fine architect of such workmanship. The use of such materials to furnish the nest with, helps to make the structure almost invisible, since so constructed, it blends in so splendidly with its surroundings.

A great number of species construct a cup-shaped nest, or nearly cup-shaped at least. Others, however, are built with a roof and are referred to as being domed shaped, the structure being more or less globular , indeed the nest of the long tailed tit is of this type. Another example of a domed shaped nest is constructed by the magpie, it is naturally much larger and made of sticks, the roof of sticks make it impregnable to all but humans.

Magpies nests are constructed of large twigs  and located high in the tree tops.

Some birds use mud as the main component in the structure of their nests. Swallows and house martins construct their nests in such a way. the mud is gathered from roadside puddles or from the muddy edges of ponds. A certain amount of saliva seems to to be used to add to the adhesiveness of the mud.

It is of interest that a certain species of swift, native to the Islands of the Pacific and Indian oceans, the glands which form the saliva are so well developed, that they are capable of producing, alone, is the only substance used to construct the whole nest. These particular nests are  the main component of the Chinese 'bird's nest soup'. Indeed the Chinese name for the soup is 'Yan wo 'literally means swallows nest. However, birds that make nests using a ' personal contribution ' are relatively few.

We have of course, the ducks, particularly the Eider duck, that take down from their under parts to form a bedding for their eggs.

The curious custom of the kingfisher, a fish eating species, depositing their eggs on a mass of fish bones and other parts of fish. This is thrown up from the mouth in the form of pellets, although actual raw material is sometimes used.

The location of the nest depends on the species, the habitat chosen and the skill of the builder. Ducks for example usually lay their eggs on the ground however, they will nest in trees as necessity demands., and many other examples might be quoted.

Birds that build cup- shaped nests in trees and shrubs usually locate them in the fork of a branch, but some suspend them from the underside of the branches as for an example the goldcrest.

The reed warbler builds its cup-shaped nest between the upright stems of three or four tall reeds in some reed bed, so that the reeds give the illusion that they are growing through the sides of the nest. the cup-shaped cavity is very deep which prevents the eggs being thrown from their container when winds bend the reeds low.

A considerable number of birds that choose to lay their eggs in holes in trees or other locations. Commonly a natural hole is chosen or one that has been created by another animal. If these are not available they will make a new one of their own. One species that adopts the latter method is the skillful little tunnel maker the sand martin. Looking at this bird, it does not seem adequately equipped for such activities having small feet and a small delicate bill. However, despite the appearance the little sand martin will tunnel a meter or more through a sandy bank terminating this tunnel with a chamber. In this the female lays her eggs on a few straws and feathers.

The eggs are enclosed in a hard shell which varies in colour and size among the many species. The eggs need to be brooded { Incubated } in order to produce chicks. The birds accomplish this by placing their abdomens over the eggs. The abdomen becomes inflamed by the accumalation of blood contained in certain abdominal veins and as a consequence increase the temperature.

These inflamed areas are termed as ' brood spots'. When this area is normally feathered, these are shed to help the incubation period.

While some species of reptiles lay as many as 60 eggs birds never lay more than twenty, as in some game birds, but a far fewer number is the rule. The auks, guillemots, and petrels  only lay a single egg during the season and will only another as a replacement if the original egg is predated or lost through some accident. Pigeons never lay more than two eggs at a time { - although they lay many eggs during the course of their long breeding season}, and plovers lay four.

For the most part the shell of the eggs have the outer surface more or less highly coloured Among the birds that do not construct a nest, but, rather lay their eggs in a depression or scrape in the ground, as in gulls and plovers, the colour of the shell harmonises with the surroundings as to be almost invisible.

Conversely, the eggs that are deposited in a more or less bulky nest, the colours are often more conspicuous as in the bright sky blue eggs of the song thrush and dunnock.

The bright coloured eggs of the song thrush

When eggs are laid in holes and other dimly lit places the outer shell is white, and this is because eggs having coloured shells would inevitably be smashed sooner or later by the sitting bird, which, when returning to the nest in the uncertain light,would break them as they try to settle down. And so white eggs would be much more visible to the eye. There are exceptions to the rule as in the case of the wood pigeon for example. They lay two white eggs, but their nest is high in a tree. here they are too high up to be in danger from below, while the canopy conceal them from prying eyes above. Other pigeons, however, lay their eggs in caves or even in burrows, so that the use of trees for placing the nest may be a relatively recent custom.

Few themes in ornithology can be made more interesting to children than the subject of nestling birds.these can be divided into two classes. Those that are on hatching, blind, naked and helpless { Altricial} and those that on hatching are clothed with thick down and able to run/swim from the moment they are born, {Precocial}

Young chickens and young ducks present two types of Precocial  nestlings, but they differ in their method of escaping predators. Young chickens today, in this respect have the same method as their wild relatives, or from pheasants,partridges and grouse, all of which require the power of flight as soon as possible if they are to survive. Consequently the development of the wings is far more advanced than in many other species. The wings are capable of producing flight as early as eighteen hours after they are born, and long before the down feathers of the rest of the body is lost.

Young ducks, wild geese and swans seek their security by swimming, and conversely, the wings develop much more slowly. Indeed, the rest of the body is fully developed long before the wings are capable of flight, so that even when they are nearly full grown they are, for all practical purposes they are 'wingless'  Young birds which run about almost from the moment they are hatched, are generally capable of feeding themselves with a certain amount of guidance from their parents.

Another feature of young birds of this precocial group is that many are adorned with a broad dark band stripe down the middle of the back which is very conspicuous. The chicks of all wild game birds, young grebes have stripes These markings, like the stripes on the zebra are very conspicuous when seen in the confines of a zoo, or as birds in captivity, however, in their natural haunts they have a protective value { see mammal colouration }. The combination of dark and light stripes give a blurred image, thereby rendering individuals almost invisible in their natural habitat, effectively concealing them from their enemies.

Note the stripes on these young grebe. 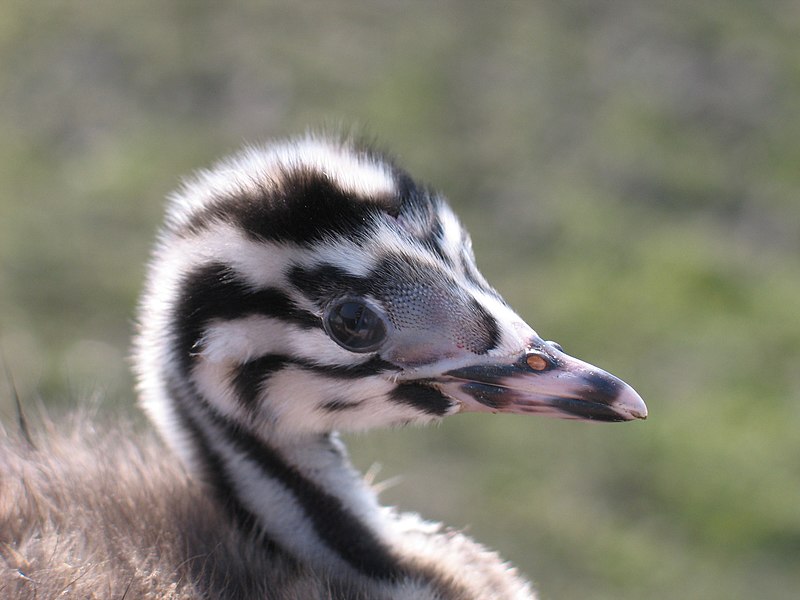 When the young of the Altricial group are hatched in a helpless condition, they are generally naked, or at most have a weak downy tufts along the surface of the body, but is insufficient to form a covering.

Young sparrows and crows are absolutely naked. Young thrushes generally have a few weak downy tufts on the head and shoulders. Another very notable feature of young birds { especially those of the perching birds is the development of broad, fleshy folds along the sides of the gape of the mouth, which assists the parent birds when feeding them. These folds, which are generally orange yellow or creamy white.

These folds tend to disappear on the development of feathers. In many young passerines birds the roof of the mouth and the tongue are spotted black made much more visible because they are set on a bright yellow or red background, or they may be white on a black background.