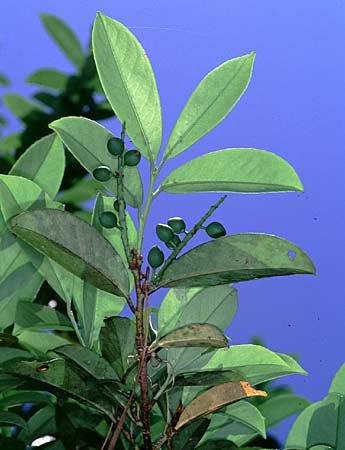 English laurel     Courtesy of the Poisonous Plants of North Carolina

The cherry laurel Prunus lauroceras belongs to the Order Rosales and the Family Rosaceae. It is placed in the genus Prunus. In the past it was placed in the order of plants Pomaceae.

The cherry laurel is an evergreen shrub/small tree that grows to the height of 15-20 feet, and has become completely naturalised in the UK. in North America it is referred to as the English laurel. Its native regions are bordering the Black Sea in south west Asia and south eastern Europe, from Albania and Bulgaria east through Turkey to the Caucasus mountains and northern Iran.

The cherry laurel is usually very resistant to winter's weather, however, a very severe prolonged frost may kill it. Merat stated that a cold of 14 degrees F, will injure it. There is on record that the severe frost of 1837-38 destroyed vast numbers in England.

The foliage of this tree are large , oblong and glossy of a bright green colour. the fruits [seed capsule is cheery shaped, red at first then turning black.

Flowers of the Cherry laurel 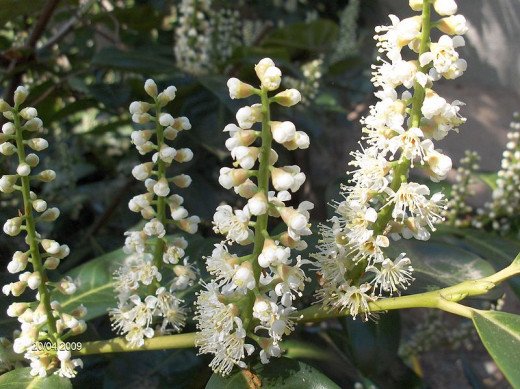 The shrub was introduced into England in 1576, from Trebisonde {now Trabzon} north east Turkey. It is sometimes referred to as the bay laurel Prunus nobilis which, in turn is sometimes confused with the Bay tree.

Foliage of the Cherry Laurel 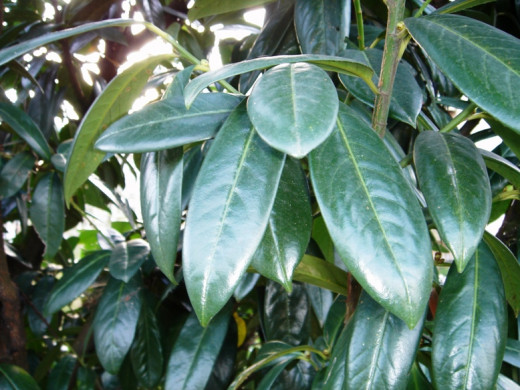 Past medicinal uses and the danger thereof

Browne Langrish made the first experiments with distilled water from the leaves, and found that in small doses it acts as a dissolvent in animals. Baylis, first administered it to a man in doses of 30-60 drops in inflammatory diseases and obstrcutions of the lower bowel. Gerard Thilenus, presented it with advantage in herpetic ulcers, to thin, he stated 'the black blood'.

Christison { Scottish toxicologist 1800's} stated that the hydrocynated oil does not exist in the leaves ready formed, but seems to be produced by some mutual reaction of principles brought in contact with one an other, when the cells of the plant are crushed and broken up.

Physiological effects----Experiments revealed that the distilled water of cherry laurel had a poisonous effect on almost all vegetables. Goppert states, that its poisonous effect is owing to some quality peculiar to it, and not to the hydrocyanic it contains, as its activity is greater than that of water containing the same quantity of the acid.

On animals. Experiments were regularly tested on animals during the early days of medicine { as they are today but thankfully much less so } but animal welfare was not high on their list of priorities and there are graphic details to be encountered in the text of many accounts of these experiments. Here I have chosen as an example one of the less graphic. 'When applied to wounds in animals it induced vomiting, convulsions, great prostration of strength, diminished sensibility and death. injected into the stomach and rectum, it excited a similar train of symptoms, except that, in the latter, the convulsions were more violent, and tetanus of the extremities was present. Its actions were most rapid and intense when injected into the jugular vein.'

Effects on man.--- several cases are on record of its effects on the human subject. One of the earliest was an account from Dublin {Ireland} in 1728. One Martha Boyce, servant to a person who sold large quantities of cherry laurel distilled water, gave her mother a bottle of it, and by the latter it was given to Francis Eaton her sister.

Mrs Eaton was a shop keeper, and thinking it was a compliment to her customers, offered them among others, one Mary Whaley drank of it. She then went into another shop, and in about a quarter of an hour complained of a violent disorder in her stomach, she was carried home, and from that time lost her speech and died in about an hour, without vomiting or purging or any convulsions.

Mrs Boyce was informed of this development and came immediately to her sister. She affirmed it could not be the cordial that had caused death, and to convince her of it she filled out three spoonfuls of distilled water and drank it. And, shortly after two more; in a few moments she died, without a groan or convulsions.

Fodere, stated, that when he was attending studies in Turin in 1784, the chambermaid and man servant of a noble family of the town stole {from their master}, for the purpose of regaling themselves, a bottle of distilled laurel water, which they took for an excellent cordial, and so as not to be caught drank it swiftly. Within a few minutes they had "expired in convulsions". Their bodies were carried to the university for examination. Their stomachs were found to be highly inflammed, but the rest of their organs were in a sound state.

In the past the use of the leaves for stuffing puddings and for flavouring soups have caused fatalities among children. the same documents give an antidote of sorts. It was recommended that milk, coffee, oil etc be administered but then seems to dispute this by stating " but their efficacy is more than doubtful" . A bit more encouraging was the following advise. the prompt administration of emetics and laxatives is much more to be relied on. warm brandy or chlorine and other stimulants have been particularly recommended, together with affusions of cold water upon the head.

The above notes are for historical interest only. This species should never be used as a medicinal preparation and certainly not for internal use, as it is highly poisonous. This is confirmed on the Poisonous Plants of North Carolina website which states. ' prunus laurocerus {English laurel or Laurel cherry} is usually found in landscape as cultivated woody shrub'. It gives the poisonous parts as being wilted leaves, twigs {stems} and the seeds.

Mode-Ingestion, may lead to the following symptoms, gasping, weakness, excitement, pupil dilation.,spasms, convulsions, coma, respiratory failure due to toxic principles cyanogenic glycoside, anygladalin. It concludes with the warning--Highly Toxic, May Be Fatal If Eaten!!! 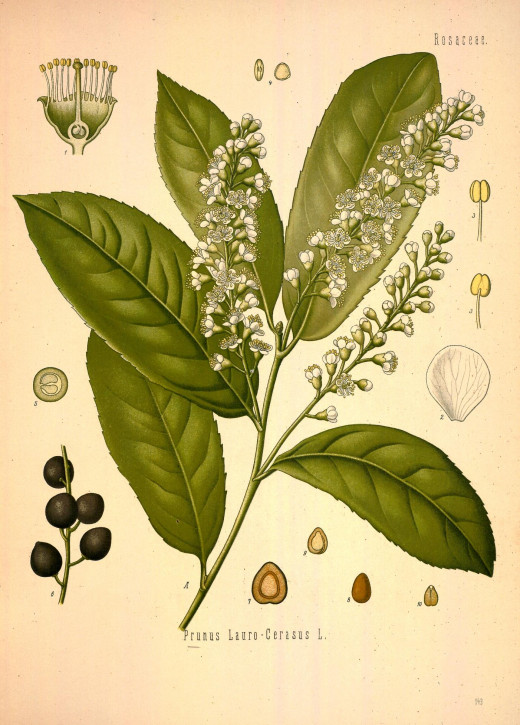