Chamomile and its medicinal uses. 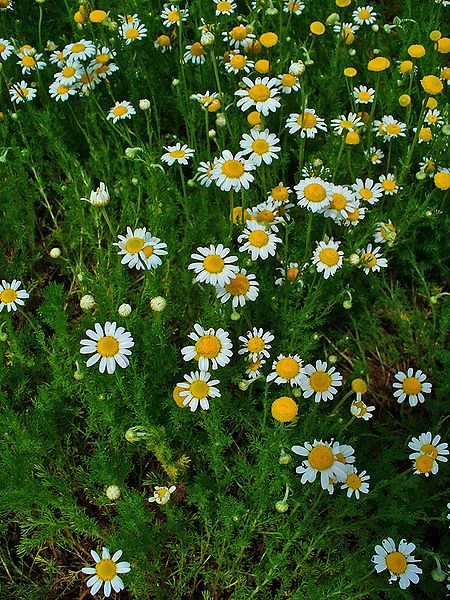 The more it is trodden the more its spreads"

Chamomile {also spelt Camomile} belongs to the Asterales order of plants {formerly Compositae} and the Family Asteralaceae. They have been allocated the genus name of Anthemis which derives from the Greek for flower alluding to its profusion of blooms. It has also been referred to as Chamaemelum nobile.

It has been given country titles which include Roman chamomile,English Chamomile, Ground apple and Low Chamomile. The English name is a corruption of words which together mean ground apple, because the plant is said to smell like apples. { The related Pineapple weed which produces no white florets is in my opinion a plant that produces a much stronger smell of apples}.

The Spaniards call it Manzanilla or little apple. There became many types of cultivars introduced to gardens with 'double' flowers, but these cultivars were considered to be much less efficacious in herbal medicines.

There are of course several other species of 'chamomile' but the only one to have been regarded with any consequence is the Anthemis cotula-the stinking chamomile or 'may weed' which is distinguished by its very smooth divided leaves which have awl-shaped segments, its conical receptacle with bristly scales and the fruit {seed case} which has no margin or pappus. this species grows in corn fields and as its common name suggests produces a fetid smell, and was said to blister the hands of those that gathered it. Up until the end of the 19th century it was employed by the poorer people of the United states as a sudorific {promotes perspiration}, in chronic rheumatism. Long before this Tragus, and others recommended it in the form of a decoction, as a remedy for hysteria and worm cases, and as external fomentations.

Here we review Anthemis nobile through the observations of past herbalists and physicians including case notes. As always we commence with a description of the subject under review.

Open flower and bud of Chamomile. 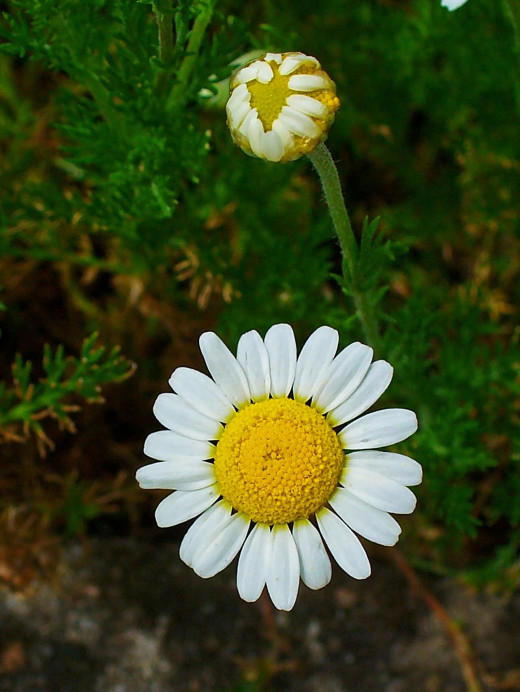 The root of the Chamomile is perennial,fibrous and spreading. The stems are procumbent, from six to twelve inches long, they are herbaceous, hairy, much branched and leafy, and of a pale green colour. The leaves are arranged alternatively, stalk-less, linear, divided into three acute segments.

The flowers are borne singly on long hairy stalks at the top of the branches. The central disk {florets} are yellow at length becoming conical. The white ray florets { what is usually thought of as the petals} spread out from the central disk. Below these the bracts are small and over lapping, they are compact and have membranous margins. The yellow disk florets are numerous, tubular, and five toothed, those of the white ray florets number a s a rule about 18, they are relatively long and have three teeth {notches} at their tips.

Matricaria is one of the several pseudonyms attributed to Chamomile 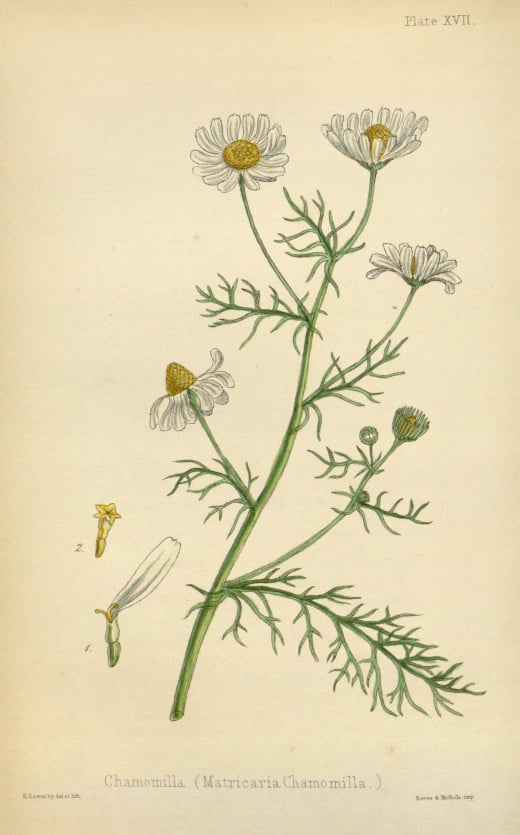 The qualities of Chamomile.

The whole plant has a certain degree of scent, but the flowers especially have a peculiar aromatic smell, which is stronger but not unpleasant. They are bitter and aromatic to taste, with a certain degree of warmth. Both water and alcohol take up the whole of their active qualities.

It was discovered that by distillation with water they yielded a small quantity of essential oil of a bluish colour. rectified spirit, extracts more of the flavour than water. By analyzing the flowers they were found to yield a resinous principle, tannin,camphor,and an essential oil. By treating them in the manner as black pepper,Dr.Thomson, obtained a considerable amount of piperine to which he ascribed the active antiperiodic properties of the flower 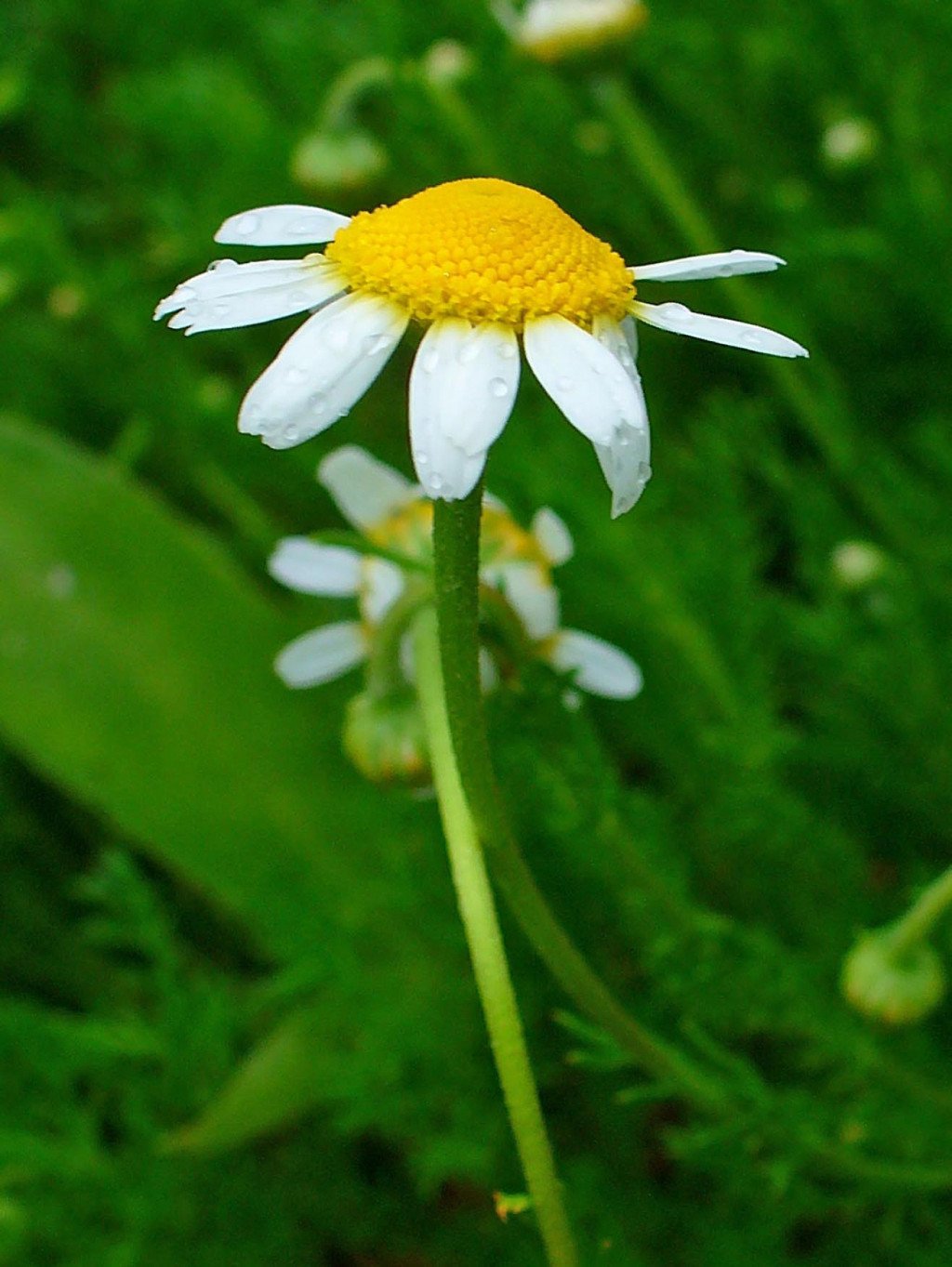 Chamomile flowers were regarded as a tonic, antispasmodic and slightly anodyne. When it was given in substance, in doses of half a drachm { also called a fluid dram} is one 8th of a fluid ounce}, every three to four hours,in the absence of the paroxysms, they were found to be of service in the cure of intermittent fevers. However, in these cases it was considered necessary at the same time to administer opium and astringents if the bowels were easily affected.

Bodard { Proprietes Medicinales de la Camomille noble } earnestly recommended Chamomile in fevers. Chamomile, especially when combined with ginger or other aromatics, and the alkalies, was regarded as an excellent stomachic in indigestion, flatulent colic, gout, chlorosis, periodical headaches, bilious affections of the stomach attended with morning sickness, and in chronic debility of the intestinal canal.

A strong infusion of Chamomile, was a very common and efficient emetic { causes vomiting}, and one which may be given in the most delicate habits,as it does not leave the stomach in a debilitated state, but, on the contrary, invigorates the organ.

Ettmuller, commended it greatly in the relief of those pains in the region of the kidneys arising from gravel and calculus, and the after pains following severe labours. Indeed its anodyne {relieves pain}, properties though little known at the time,were considerable, and in many cases procured relief from pain, without drowsiness or other narcotic consequences. The effect was so striking that Ettmuller, describes it as being 'miraculous'. He administered a decoction of the flowers in beer, and affirmed that to his knowledge, this decoction, had procured almost immediate relief, where opium and other anodynes had failed.

Both Ettmuller and Forsetus {Goeffroy,Tract,de Med page 301} speak of the anodyne influence of Chamomile over cardialgia, or severe burning pain at the stomach, either exhibited in infusion or in the form of a tincture. As previously mentioned, Chamomile was also employed in external fomentations. It was the prevailing opinion among medical practioners of the 1800's, that the only good resulting from fomentations was owing to the heat which they conveyed to the part, and on practicing on this theory it had been usual to employ hot water only.

Physiological experiments, however, have shown that vegetable substances, as well as others, were absorbed from the surface, and being received in this manner into the system, produced precisely the same effect. Hence fomentations made by a strong decoction of Chamomile,Poppy heads, and other similar plants, were found much more effectual in relieving pain than the simple application of hot water. Fomentations of Chamomile were used in colic, local and intestinal inflammations, and to phlagedenic ulcers.

The infusion was considered to be a useful addition to emollient anodyne glysters, in flatulent colic, and in irritations of the rectum producing tenesmus { an ineffective painful straining to empty the bowels or bladder}. In the form of a cataplasm {an old name for a poultice}, Bodard recommended them in painful tumors of the breast. It was also found of great service as a both for the feet and legs, both in very painful and dangerous colics, and in some violent headaches.

Besides the infusions and decoctions of the flowers of Chamomile, there was also prepared an extract of oil. The dose of the powdered flowers was from half a drachm to two drachm's twice or thrice per day.

Macerate for ten minutes, in a lightly covered vessel,and strain. A good stomachic and tonic, which may be given in doses of from one to two ounces, two or three times a day. When exhibited warm it excites nausea, and is occasionally employed to assist the operation of emetics.

Boil for quarter of an hour and strain. used for the purpose of fomentations and glysters { a kind of syrup}

Boil down to four pints and strain whilst it is hot; then evaporate to a proper consistence. It has scarcely any efficacy when used alone, but it is a useful adjunct to rhubarb and sulphate of zinc, as a stomachic pill. 10-20 grains given as a dose two to three times daily.The above recipes are for historical interest only and not meant as a guide to home made preparations. 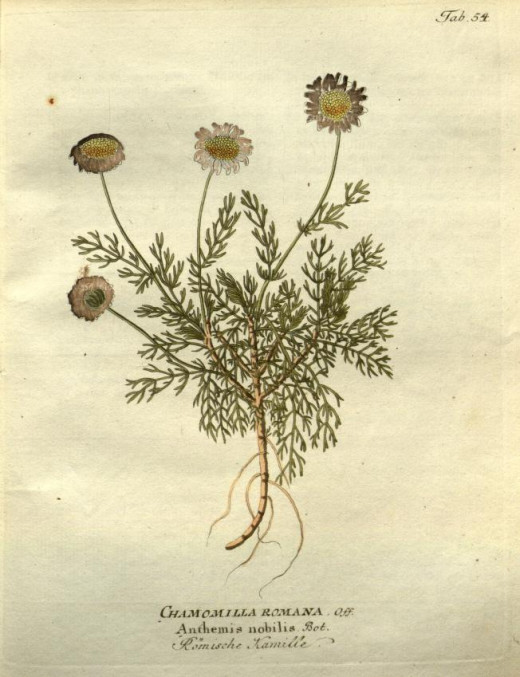 In an English book published in 1905 there are the following passage. " In villages, it is regarded as supplying the very best tonics, and Chamomile tea was taken in the early morning with unhesitating faith. Even in our days we may sometimes see a delicate invalid sitting by a Chamomile bed to inhale the aroma which he hopes will bring strength to the weakened lungs"

Other writers suggest that a decoction of the flowers is good to wash the head, and comfort both it and the brain. Immense quantities of the plant were reared for the London market. In the neighbourhood of Mitcham and Tooting, where, during July, August and September, hundreds of people were engaged in gathering the blossoms.

Country people right up until the 1900's walked daily over Chamomile beds in their gardens in order to keep it in perfection. Lawson conveys that men of olden times loved to repose by it in the sunshine or in shadow. Chaucer wrote---

" And on a little herbage that I have,

That benched was on turves fresh igrave,

Such a bank, planted with Chamomile among the turf would present a soft cushion-like surface, and to those who liked the odour would yield on pressure, a pleasant perfume. Parkinson alludes to the old use of this plant. " it is a common herbe, well knowne, and is planted on the rooves in alleyes and walkes, and on bankes to sit on, for the more it is trodden on and pressed downe in dry weather, the closer it groweth, and the better it will thrive. The use thereof is very much both to warm and comfort and to ease paines, being applied outwardly after many fashions."

Although not a native to the USA,Sir Charles Lyell, in his work on the US,remarked that he saw it all about the neighbourhood of New Harmony, and added " Many European plants are making their way here,and it is a most curious fact, which I afterwards learned from Dr.Dale Owen, that when such foreigners are first naturalized, they overrun the country with amazing rapidity,and are quite a nuisance, but they soon grow scarce, and after 8-10 years are scarcely met with at all" 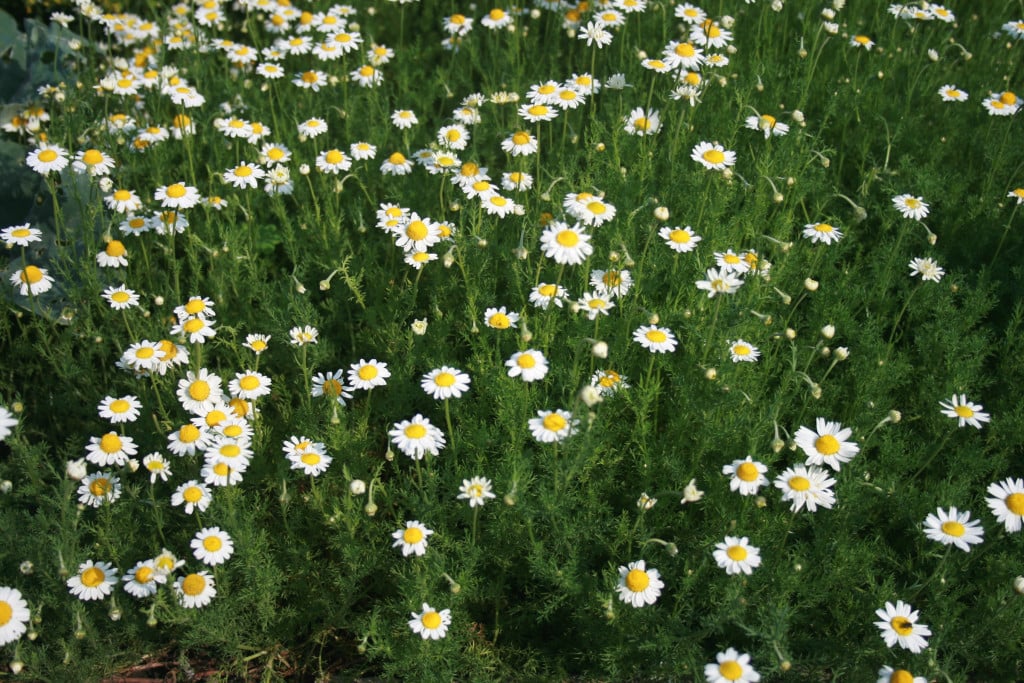 Recent scientific studies have proved that the Ancients were right in their assumption that Chamomile is beneficial to human health. It is now known that Chamomile is also good in ridding the skin of eczema and as an eye bath for conjunctivitis as well as helping all other ailments already mentioned in the text above.

Chamomile is also reputed to have a beneficial effect on sickly plants gave rise to the name of " the plants physician". Placed next to a sickly looking plant in the garden,nine out of ten appear to recover.

Chamomile is used in toiletries and other cosmetics.However, the most popular use in modern times is by way of commercially produced tea bags, available from health shops and drugstores. This is regarded as a tonic. It is also thought that the infusion applied as a lotion will help rashes, minor burns and eczema when smoothed on the affected area with cotton wool.

If you are trying an herb for the first time try a little first to test your body's tolerance to the herb. 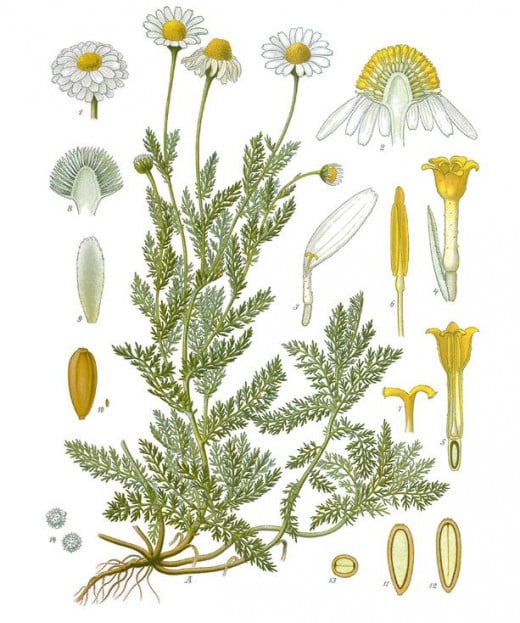