Cetti's warbler belongs to the Passeriformes { Perching birds} Order of birds,and the family Sylviidae within that order. They are named after Francesco Cetti {1726-78} an Italian mathematian and naturalist.

In the UK they are placed on the Green list of conservation concern { no current concerns} where they are classed as a resident breeder and a passage winter visitor. They were first recorded in the UK in 1961 and first bred in 1973. There are n estimated 2,000 males in summer. { Source BTO} .Severe weather can decimate populations both here in the UK and in Europe,only a succession of comparatively mild winters has helped to increase their presence.

They are found in south and Central Europe to central Asia and the Middle East, where they inhabit reed beds,swamp, and dense vegetation near water

Confusingly there are a number of Passeriformes that are referred to as Warblers,and they are not necessarily closely related to each other, but do share some characteristicissuch as being fairly small,vocal and insectivorous.

The 'old world' warblers are a group of birds and were formerly grouped together in the family Sylviidae. This family held over 400 species in over 70 genera and was a source of taxonomic confusion. initially two families were spplit, the Crisicolas into Cisticolidae and the Kinglets into Regulidae. However, in the past ten or so they have been subject of much research and many species are now placed into other families including the Acrocephalidae,Cettidae,Phlloscopidae and Megaluridae.

Here we review the Cetti's warbler and as always we commence with a description of the subject under review. 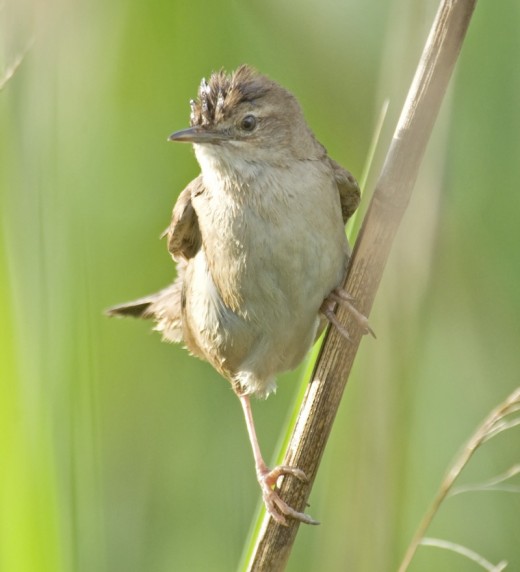 Originally appeared on Flickr uploaded to Commons by Oskilla

This charming and unassuming little bird is about 14 cm { five and a half inches} long with the male weighing 15 grams and the female 12 grams.It is distinguished from all other members of the Syliidae by having only ten feathers in the tail,as opposed to the general rule of twelve feathers in the tail of other species. The tail is also longer and broader than the tails of many other warblers.

The upper parts of the male is a rich chestnut brown,darkest on the wing primaries and the tail. The throat is white,shading off to ash grey on the belly and to olive brown on the flanks and under-tail coverts, the latter being tipped with white. The wings are short only just covering the rump. The beak and feet are light brown. The iris is nut brown.

The female has the colours slightly paler than those of the male, but they are almost impossible to tell apart in the field.,except by size if you are fortunate enough to encounter them together.

The feet are rather strong,claws strong and curved.

The bird is often confused with Locustella luscinoides { Savi's warbler}**,indeed Temminck recorded it has being seen in Britain due to this confusion.

Cetti's warbler has a rounded head with a narrow pale grey stripe arching over the conspicuous dark eyes and short rounded wings.

They are charming little birds. 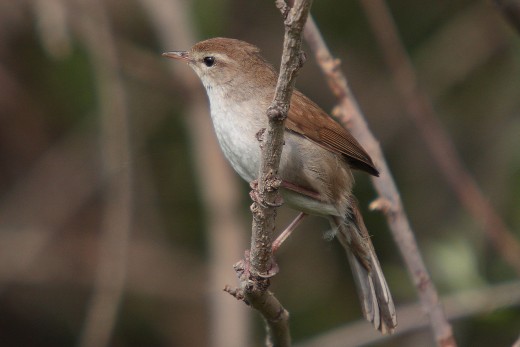 Cetti's warbler was only recorded in Britain in 1961,and first bred in according to records in 1973. Thus, as regards to historical information I researched through archaic bird books of European species to procure an insight of opinions from past ornithologists.

According to one such ornithologist,Charles Bree,1896, the bird was found in the whole of southern Europe, he states " It is said to have been killed ,but, erroneously, in England and Count Muhle, in expressing his surprise at this,attempted to account for it by attributing it to a deficiency in the development of its wings; a reason I think cannot be maintained ,when we hear of much weaker birds flying a much greater distance. It occurs in Sicily,Corsica,Sardinia,Spain and France,being especially common in winter in the southern provinces of the latter country"

Mr. Grebe, records its appearance in the department of the Var,and Mr.Crespon, indicates many localities in which it is found in the Province.

Mr Salvin says in the 'Ibis' for July 1859,-" On one or two occasions among the Tamarisk trees on the banks of the Chemore I caught a momentary glimpse of the bird, not more than was sufficient to recognise it. It appears to be shy and common in the eastern Atlas of Africa."

Major Irby,writes from Gibralter," The bird is resident and found wherever there are bushes and water. It is only found in the thickest and most impenetrable coverts of grassy plants,and thick hedges and ditches. It is extremely shy and more so than any other reed warbler. if it is high upon a reed stalk and sees the presence of any movement it is down among the reeds in a flash. Its song is rather agreeable, but is only heard, in the majority of cases,from the depths of concealment"

Another eminent recorder reveals " This bird seems to have more than usual the instinctive knowledge that reasoning man is its enemy." When it is pursued,and it thinks the enemy has been lured far enough away,it will quickly turn back again to its original place of security.

Mr.A B.Brooke writing another paper on the species remarks " This without exception the most difficult warbler I have ever come across,either to see or obtain,although in suitable localities its loud bold song may be constantly heard. They love to secret themselves in the very middle of the densest and most tangled mass of briers and creepers and are very shy. On hearing any slight noise they often begin their short rich song, but on approach of danger steal off rapidly and silently bursting forth again thirty or forty yards further on, while one is still peering into the bush they were last heard in. They are extremely common in Sardinia,going generally singly or in pairs, and every bush that is thick enough along the river banks, or round the shores of the Stagnos, is sure to hold a pair. They prefer wet marshy places, indeed I have never seen them except in the vicinity of water,around Oristano they are particularly numerous"

Like all its allies it feeds on insects of various kinds which it obtains among the thickets which it inhabits.

Finally Dresser { A History of the Birds Of Europe}1881,makes the following observations. " In its habits it reminds me of the Grasshopper warbler.The only time I got the opportunity to see it was early morning,soon after sunrise. It was then intent on feeding and not so shy. It was extremely active,even more active than the titmouse. It would run up a branch of a shrub to its extreme end, then drop into the heart of the shrub,and run up another branch"

Here in the UK the bird has become established in the southern counties of England and on the Norfolk Broads since 1961. During the course of my research I came across this interesting papers by Rev.Canon Tristram, on his visit to Lake Halloula in North Africa { 'Ibis',volume two first series} describes his meeting with this bird.

" But let us search the coarse grasses and Tamarisk bed carefully, for here, says my guide,we shall find Sylvia cetti {the old scientific name for the bird}. I had the week before obtained a nest from near Algeria, but had no opportunity of watching habits of this bird. I am again disappointed. The bird had just begun to sit, but has crept away at the first alarm,and though we watched some time in the neighbourhood she does not return.

" I take the nest, with its precious contents of four brilliant red eggs,so strangely different from those of every other warbler. In colour they are unique among eggs, and show no affinity with any allied species. They form a singular exception to the rule that a connexion may be traced in all genera between the eggs of different species. There is one constant type for all other aquatic warblers, however, widely the extremes may vary,still bear the same resemblance to the normal type.Not so with Sylvia cetti.

" Its affinity seems to be rather with Prinia sonitans { 'Ibis',volume two page 50},and so may indicate a clear alliance with that genus than hitherto has been admitted" The Rev Tristram thought that the Cetti's warbler were closely allied to the genus Prinia.
Source: Courtesy of Lip Kee Yap CC BY SA 2.0 Generic license originally posted to Flickr

Rev. Canon Tristram, goes on to describe the nest which he says is very loosely constructed,placed in rushes or coarse herbage its depth more than double its diameter,composed entirely of coarse grasses outside and finer stronger types within, but with no lining of hairs or feathers. " I afterwards frequently saw the bird, but only for an instant at a time,as it invariably drops among the rushes, and will not take flight when disturbed. I never succeeded in noting its song,if it has one"

Colonel Irby,who studied the nests of this species in various localities,states that the nest is always placed at some distance from the ground,generally two to three feet,and is either situated in a thick bush,or, when in a bushy swamp constructed somewhat like the nest of a Reed warbler**, on the stalks of reeds and Epilobium {willowherbs}.

" These nests are built chiefly of bits of small sedges intermingles with willow cotton,and chiefly lined outside with strips of the Epilobium,inside with fine grass, a few hairs and bits of cotton at the top..Their nests built in bushes are chiefly constructed with grass and cotton,and are entirely lined with hair. All the nests are cup shaped,largest at the base measuring about four and a half inches in height, the inside depth about two and a quarter inches, the internal diameter about two and three quarter inches"

Four or five eggs are deposited by the female and are of a unique red colour {see image}. They are incubated for around 16-17 days by the female . The young are fed on a nutritious diet of insects and their larvae and are ready to leave the nest in a further 14-16 days. If conditions are favourable they will go on to raise a second brood before leaving for warmer climes in the autumn.

The uniquely colured eggs of the Cetti's warbler. Europe-They are a species of least concern.