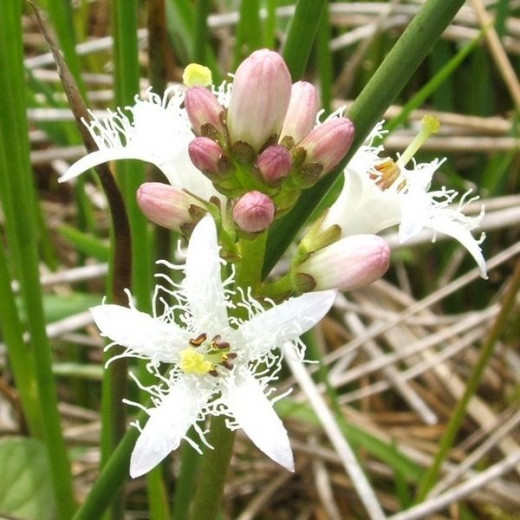 " Hidden away in some secluded corner of a swamp we may chance upon the lovely white buckbean. Its racemes of star-like faces, covered with the soft fringe have a sweet expression that is most attractive"

The Buckbean also commonly referred to as the bogbean ,and formerly the marsh trefoil, grows in spongy bogs, marshes and shallow water throughout Europe. It is also found in North America. if this plant with its beautiful flowers was not a native and so abundant it would surely be cultivated more in gardens.

It is found as far north as the inhospitable regions of Lapland as it does in equally diverse conditions in North America. The generic name of Menyanthes derives from two Greek words that signify Month+flower. { in fact in may be encountered in bloom from May until the end of Jul;y, depending on weather conditions}. The specific name of trifolata signifies three leaves {leaflets} which also give rise to its older name of marsh trefoil.

Components of the buckbean 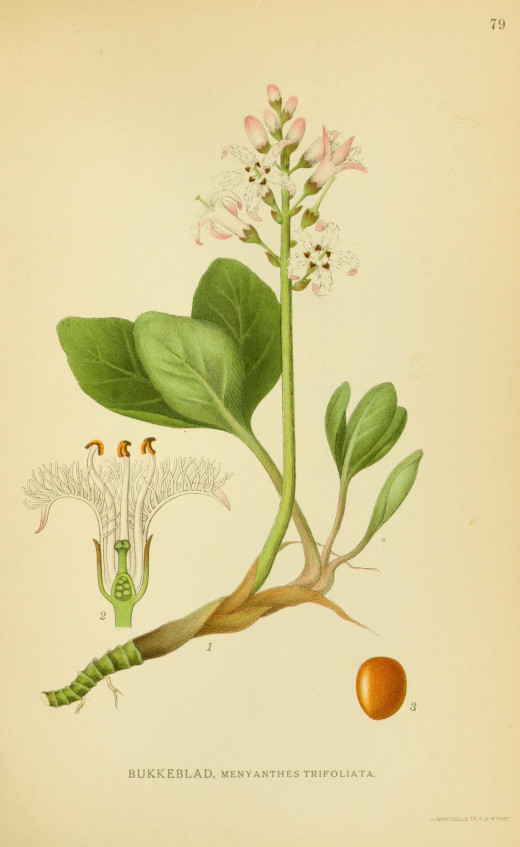 Description of the Buckbean, Menyanthes trifoliata.

The roots of this species consists of numerous fibres proceeding from a long, creeping,cylindrical,jointed rhizome.

The stem is a simple, naked cylindrical scape,rising about one foot high. The leaves are radical, consisting of three quite large, smooth, obovate,obtuse, entire, bright green leaflets, somewhat undulating at the margins, and they are borne on long stalks, shorter than the flowering stem. They are around two inches long and one inch wide.

The flowers grow in compound racemes terminating long stalks from six to eighteen inches high. They form ,clustered together a thick, short spike. The corolla {petals etc} is funnel shaped about three quarters of an inch across, outwardly rose coloured and inwardly white. they have reddish coloured stamens.

The fruit capsule is oval, furrowed, one celled, two-valved, the valves bearing the seed in their axis. The seeds are globose, smooth, shining and of a pale yellow colour. 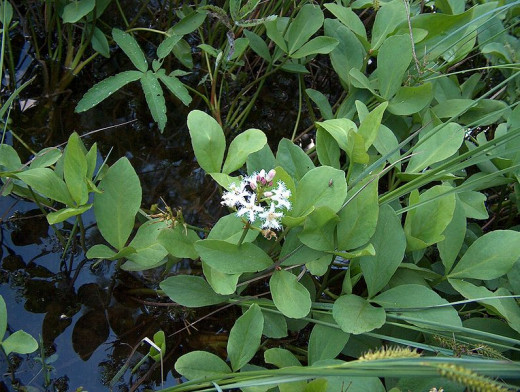 Mr Curtis {1800's}, talking of its lack of use as a garden Marginal plant justly states, " That it is equal in beauty to the Kalmias, rhododendron and exotic heaths, on which so much money is expended, while this is unregarded"

Certainly the rambler who may come across a secluded pond, when the species is in flower,is never likely to forget the wonderful beauty of these blooms. In Hamburg it was commonly referred to as the 'flower of liberty'.

Icelanders, once used pieces of their matted tufts to prevent the saddle or any load from chafing the horses back. In Parkinson's time the plant was also known as the marsh clover.

The buckbean has no smell but develop an intense bitterness, which imparts both to alcohol and water, either by maceration or infusion. The root affords a small portion of volatile oil, and a gum-resinous substance., which in addition to its bitterness, exhibits considerable acidity and astringency. This is not perceptible to taste but is rendered evident by the dark colour once produced in the decoction, by sulphate of iron. It also contains a small quantity of fecula, to which the nutritive properties are owing.

Linnaeus informs us , " That in some parts of Lapland, where the buckbean abounds, the roots are dug up and given to cattle who freely eat it, instead of their usual food. In times of scarcity the dried, pulverized roots, mixed with a little wheaten flour, are not less useful as food for food for the distressed inhabitants of that country;but the bread thus made, is very bitter and and detestable"

the peasants of Westrogothia were said to frequently use the leaves instead of hops for preserving their beer, which " thus rendered of an agreeable flavour, as well defending from acescency" It was recommended,for the same purpose to the poor of England,two ounces of the dried leaves being reckoned equivalent to a pound of hops. Beckstein, said that in dying they afforded a green and yellow colour.

The buckbean was said to act as a powerful tonic on the animal economy, either by augmenting the vital energy of certain organs, or by more abundant secretions. hence the detersive,diuretic,de-obstruent,,emmenagogue , and other properties which have been attributed to it. Its exciting influence upon the stomach and intestines, when administerd in a large dose, is such as to produce vomiting and purgations. This was observed by Willis, when it was given in a powder to the extent of two scruples { An Apothercary's measure } but he says in small doses its actions are very different.

In many countries, especially in Germany, this plant was used medicinally for a long period, and esteemed almost as a panacea {cures all}. Its efficacy has also been extolled, in days gone by, in nervous diseases, such as periodical headaches, hypochondriasis, palpitations of the heart,and paralysis. Willis used it as a vermifuge for children, in the dose of half a drachm to one drachm every morning fasting for many days together, which was followed by an 'abundant evacutation' of intestinal worms.

Simon Pauli, Doloeus, Willis and others, have eulogized it more or less as a remedy in abdominal obstructions, urterine haemorrhages, dropsy, scrofula and rheumatism. herbalists even lauded its virtues in lung consumption. However, its use against intermittent fevers is better authenticated. As this species grows in marshy places where intermittent fever abounded in past times, it was deemed by some as a specific for those diseases. 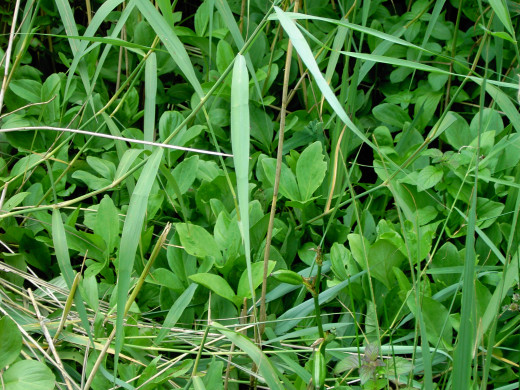 The celebrated Boerhaave, in his own case of gout is said to have found benefit from drinking the juice mixed with whey. Dr. Alston and others are on record bearing witness to its efficacy in keeping off gouty paroxysms. Dr Cullen relates to us that he had " Several instances of its good effects in some cutaneous { affecting the skin} of the herpetic kind." it was taken for that purpose in the manner of tea..

Externally , it had also been variously used. Schutz, found the pain of gout mitigated by applying the fresh leaves to the part affected. Thedecoction was also administered in baths and fomentations, in some chronic diseases of the skin.

The Flora Medicale,tom v page 12} states however, " But it must not be forgotten, that its application to ulcerated parts has been followed by swelling and inflammation;and its internal use by dyspnoea { difficulty in breathing or catching breath}. And although these ill effects are soon dissipated by the suspension of the medicine, they form a sufficient reason for abstaining from it in plethoric subjects, in delicate and irritable habits, and in all diseases accompanied with inflammation"

In his book ' American medicinal Plants' 1887, Millspaugh states-" The previous uses of the dried plant in medicine were all dependent more or less upon its so-called tonic actions; while in its fresh state it was used as an energetic cathartic.; As early as 1613, a Swedish writer Johannes Franckenius, states that a decoction of the herb removes all visceral {intestinal} obstructions, acts as an emmenagogue { increases menstrual flow} and diuretic, kills intestinal worms and is an efficacious remedy in scrofula. " Millspaugh went on to reveal-" That the plant in the United States extends southward as far as Wisconsin in the west and Pennsylvania in the east.

Bigelow 1817, in his " American Medical Botany" states that the buckbean or marsh trefoil is one of those plants which are native in Europe and North America, with so little difference of structure, in the two continents, that the specific identity can hardly be doubted. " I have compared specimens of the native, and, the foreign plants, without being able to perceive the least definable difference, except in size, the American being smaller. Yet if we admit the statements of botanical writers, the plant flowers in England at least a month later than it does in the neighborhood of Boston, a circumstance not unusual in other species of vegetables. It is common in new England and grows according to Pursh, as far south as Virginia"

The above information is for historical interest only and not meant as a guide or encouragement of self medication. 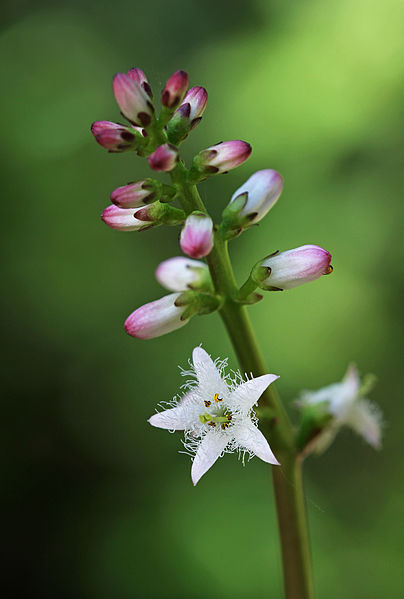 The ailments, the buckbean is used as a treatment for, in these more enlightened times include rheumatism,anemia,and blood pressure. However, it is almost always used in conjunction with other herbs such as Burdock root,Yarrow, Meadowsweet, Raspberry leaves etc.

A dried extract of buckbean is a component of some rheumatism tablets that can be purchased at drug stores and health shops. Some herbalists still recommend the use of the leaves to make a tea, or used externally as a poultice to reduce swellings. It is also used as an herbal tobacco.

Buckbean has been employed against migraine and nervous headaches and to promote appetite and again ready made commercially produced capsules and powders are available.

It seems there is a split in opinion on the use of Buckbean and of its efficacy in certain ailments. My personal opinion is that it is better left alone as regards any home made preparations are concerned, instead purchase commercial products that are ready to use. if you are trying a herb {this or any other} try a little first to test your body tolerance. If you are already on medication your doctor or/and herbalists should be informed before using additional medication, for an ailment,as this can be dangerous.

Menyanthes belongs to the Gentianaceae, a genus of plants of perennial marginal water plants,grown for their foliage and flowers. The horticultural varieties tend to be less invasive than the wild buckbean.

They are fully hardy and prefer an open sunny position. remove fading flower heads and foliage and divide overcrowded clumps in spring. They may be propagated by stem cuttings in spring. Each plant grows to the height of nine inches + { 23 cm + }with a spread of twelve inches {30 cm}