Bats are associated with darkness, spooky places and Dracula, so it is little wonder that many people do not appreciate these, are only flying mammals. This biased view is of course, just a perception, of those not acquainted with the lifestyle and virtues of these fascinating creatures, that do untold good, by ridding the air of its insect inhabitants.

There are close to a 1,000 species of bats around the world, placed in 19 families. In Britain we have but two of these families occurring.  These are the Rhinolopidae { the horseshoe bats} and the Vespertilionidae { known as the ordinary bats}. They belong to the Order Chirptera.

There are about a dozen species "ordinary" bats occurring in Britain, some of which are widespread and locally numerous, some are very rare and others are endangered species. All the bats in Britain are  fully protected by law. Bats and their roosts are protected under the Wildlife and Countryside act 1981, the Conservation {Natural Habitats,etc,} regulations 1994, the Countryside and Rights of Way Act 2000 and the Nature Conservation {Scotland} Act 2004.

A summary of this protection is as follows--- Should any work be planned that could result in the disturbance of bats and their roosts, the relevant Statutory Nature Conservation Organisation--Natural England { Formerly English Nature} Countryside Council for Wales, Scottish Natural Heritage or the Environment and Heritage Service { Northern Ireland}- must be consulted.

It is illegal to catch or disturb them, or to interfere with the places where they breed and hibernate.  [ This includes roof spaces }.

On this page I review the Brown long-eared bat often referred to as the common long-eared bat, Plecotus auritus which is a fairly large European bat which is wide spread through out Britain , with the exception of  some exposed Scottish islands.

I start with this bat because it is widespread, but, also because its large ears, make it relatively easy to identify.

It would be prudent then to start with a description of this fascinating mammal.

As previously mentioned the long ears, held erect in flight, are a key identifying feature. The ears are 3.3 to 3.9cm long. When they are not hunting the ears can be folded away under the wing. The narrow, tapering tragus { The tragus is a fleshy spike in each ear that is part of the sound reception system} projects forward even when the ear is folded.  The bat as large eyes and a bulbous muzzle  the nose and eyes are of a light brown colour.

The head and body length is around 37-52mm. The fur is long and fluffy, of a yellow brown colour. The forearm length is 34-42mm. The thumb more than 6.2mm. Tragus--Greatest width less than 5.5mm. Wingspan--230-285mm. the wings are broad with a brown membrane.

The brown long eared bat emerges just after sunset to feed on invertebrates, mainly moths, but also spiders and caterpillars. These may be taken in flight or gleaned from the foliage. Larger prey may be taken to a "perch" to be eaten. These may be located in porches, or barns. Accumulations of discarded moth wings, for example, often convey where these "perches" are located.

Unlike other bats this species feeds extensively on insects and larvae resting or feeding on the foliage of trees. It hovers while it seizes its prey. This involves an aerial prowess that is a marvel of nature. It uses echolocation to pin point its prey. It thought this species also uses eyesight to detect its prey. They are even capable of taking insects from lighted windows.

They are also a species that flies close to the ground in its pursuit of prey. This makes them vulnerable to that most skilful of killers the domestic cat. The cat will swipe at the bat with its paw. if a bat is brought down in this manner it will be killed. The cat does not eat the bat for they are unpalatable to them. Thus it is killing for killings sake.

Cats may appear to be cute and cuddly but they are skilful killers. Courtesy of Sonelle CC BY-SA 3.0 License. 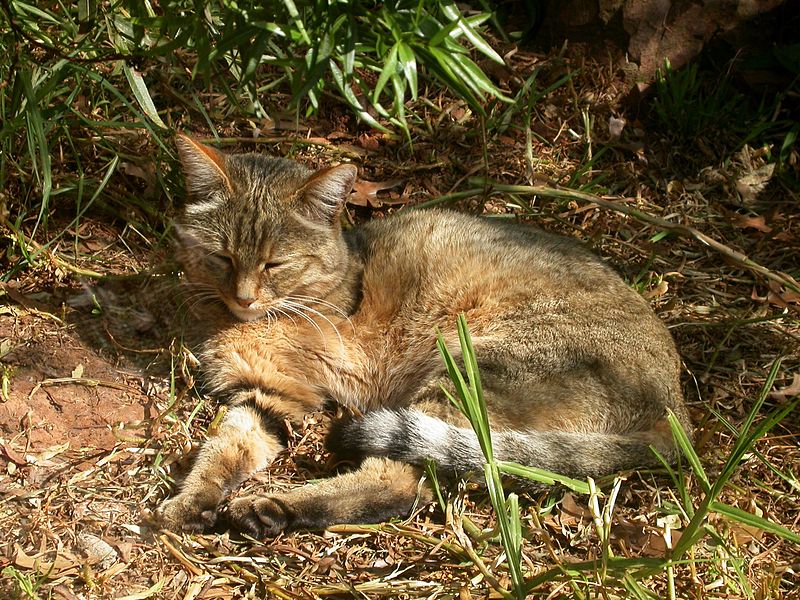 This bat is a species of open woodland,parks and gardens, and it is often associated with houses, especially in the north of the country.

Maternity roosts may be occupied from April until October.{ sometimes these roosts are occupied throughout the year}.  unlike other bat species the males are often found present in the maternity roost.

The female usually gives birth to a single young in late June to mid-July. twins are very rare. Studies have revealed that for three weeks the young is fed entirely on its mothers milk and they are left in a creche inside the roost when she goes out to feed.

Within three weeks the young bat may take its first flight inside the roost and by the time they are 6 weeks old they are fully weaned and quite capable of foraging for themselves. most females breed in their second year, but do not necessary breed every year. males are about 15 months old before they are ready for breeding.

Studies have shown that many summer roosts are found in buildings. Particularly so, old buildings with large roof spaces. They also revealed that bats roost singly or in small groups among the roof timbers of the apex, especially around ridge ends and chimneys and crevices in ridge tiles.

Long eared bats spend more time in side the roof space than many other bats. they may leave their roost from a variety of places and small amounts of droppings may be in evidence at these points.

They will also roost in tree holes and bat boxes. records reveal that 65 where once found in one box!  Long eared bats are usually quiet within the roost. they do not normally leave until after sunset, although they are active , stretching, grooming and flying around inside the roost for up to an hour before they emerge.

When they have young to feed the females will return to the roost within a couple of hours to suckle them.At other times they will remain hunting until dawn. long eared bats have a small feeding range.

Hibernation begins in November and a variety of sites are chosen. Only a tiny proportion of long eared bats seen in summer are found in winter, probably because most of them spend their winter in trees, or tucked away in buildings, for example in  hollow walls, where their presence is not obvious. Small numbers are found in caves, tunnels and mines particularly in early winter or after prolonged cold spells. In these situations they may well hang in the open, on the walls or from the ceiling-brown longed eared bats prefer to hibernate at very cold temperatures, often just above freezing point.

The bats roost  by hanging head down with wings folded and ears folded beneath the wings.  They can crawl with their wings folded using its forelimbs as legs and their hooked thumbs to grip the surface.

To relieve loss of moisture when hibernating  the bat folds its ears beneath the wing. Long eared bats tend to move around a lot in the winter changing their hibernation sites in response to the temperature.

Some old drawings of bats give them an evil air-another reason some people are put off these harmless creatures. Compare this drawing with the photograph  of an actual bat above, it looks positively docile compared with that of the drawing.

Brown long eared bats' echolocation calls range from 25 to 50kHz and peak at 35 to 40kHz.

On a bat detector the calls are very quiet and heard as a series of clicks rather like those produced by a geiger counter. Long eared bats, because of this quiet detector sound are some times referred to as whispering bats.

There is another species of long eared bat that occurs in Britain --The grey long eared bat, however, these are very rare and are confined to the south of England. It was only recognized as a distinct species in the 1960s.

The Bat Conservation Trust  is the main organisation dealing with the conservation of bats in Britain.

Long eared bats have declined in Britain owing to land change use, especially removal of trees and woodland, which has resulted in the loss of suitable feeding habitats and hollow trees for roosting. They are particularly susceptible to pesticides, including in roofs where they often roost on exposed timbers. {Source Bat Conservation trust}

Update-July 2013 Man fined for destroying Bat Roost. A Bolton man aged 33, following a guilty plea was fined £540 and £100 costs and a £50 surcharge. { The maximum fine for this offence could be six months imprisonment or a £5,000 pound fine}. The Roost was situated in a building he wanted to develop. Even though he knew the bats were roosting he demolished the building without considering the bats in any way. To read the full story Click on Links banner on the right hand side of this page. Scroll down to Wildlife Extra. Click. This is a direct link to the website homepage. Search for the article Bolton Man fined for destroying a Bat Roost. The report conveys the feelings and prosecution brought by he Police Wildlife Officer.