Brooms are a group of evergreen or semi-evergreen shrubs placed in the Legume family Fabaceae which are in the main placed in three genera which are Chamaecystus,Cytisus and Genista. they belong to the Order Fabales.

The common broom which is under review here is Cytisus scoparius which is a native shrub of north western Europe. In some older herbals it is sometimes given the Latin name of Sarothamnus scoparius or Genista scoporius.

It is a perennial which thrives  on sunny sites, usually on dry soils { however, it thrives very well in the damper climate of north west England }at low altitudes. it is a member of the pea and bean family and is a close relative of the gorse {Ulex} and the laburnum tree.

Old names for the shrub are many and varied  and include broom tops, Irish tops, Basam ,bisorn, bizzom brown, brum, breame and green brown.

Description of the broom.

The leaves approximately 2 cm long are arranged alternately and are hairy when young, the lower ones slightly stalked with three small, oblong leaflets, the uppermost near the tips of the branches have no stalks and small, often reduced to a single leaflet.

The large bright yellow flowers are slightly scented and are superficially similar to those of the gorse, borne on short stalks. They may be solitary or in pairs with a bell shaped calyx. The corolla is  2-2.5 cm long. The flowers are typical of the pea family.

The flowers are succeeded by oblong flattened pods about 2-3 cm long , hairy on the edges but smooth on the sides. They are nearly black when ripe. They burst with a force that throw the seeds some distance from the parent plant. On a hot sunny day the pods can be heard " cracking " open in a long succession

Gorse flowers are very similar to those of the broom 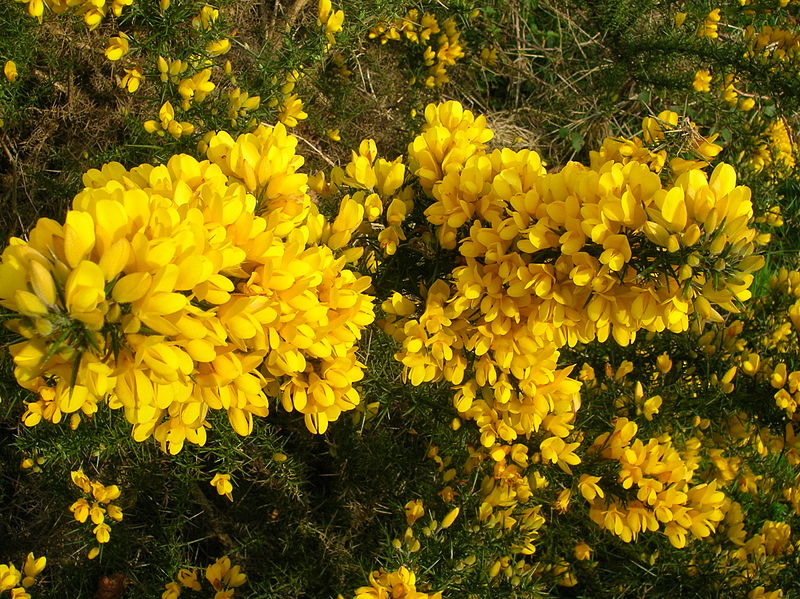 Seed pods of the broom almost ready to burst. Pods are typical of the pea and bean family.

The broom has been put to many uses. When planted on the sides of steep slopes its roots serve to hold the earth together to prevent corrosion. The species will flourish even when planted close to the sea, salt spray having little affect on it. Like the gorse it is a good shelter plant. For the latter purpose it was often utilised as a shelter for game and as a wind break to shelter more vulnerable and valuable shrubs until they became established.

Mature thicker stems have been used by cabinet makers for vaneering. Some regions employed the twigs and branches to make baskets in the manner willow is used. many years ago, here in the north of England the broom was used for thatching cottages and corn ricks, or as a substitute for reeds to produce fencing and screens.

Of course the common name suggests they were used as brooms. The twigs were bound together.  Whether broom gave its name to the sweeper or visa versa is not known the fact being lost in the fog of time.

Broom is related to the poisonous laburnum tree. Again this species produces the pods a characteristic of this family.

Modern day ---Broom is now considered to be DANGEROUS-and not recommended for home made preparations. However, the unopened flower buds can be safely eaten in salads, and a wine is made from the open flowers.

HISTORICAL MEDICINAL USES.----In days gone by the broom was employed in many herbal preparations and they are to be used here as an historical guide to its former uses.

It was considered to be diuretic and was said to contain cathartic substances. It has been used to treat complaints of the heart. It was used to treat dropsy and infections of the kidney and bladder.It was said to weaken the heart and lower blood pressure and produced similar symptoms to Conine { Hemlock} on the heart.

Other species such as Spanish broom Spartium junceum, are even more poisonous and it was essential therefore thatthe right species was gathered.

The following text is taken from Adam in Eden or Nature's Paradise, by William Coles, herbarist published in 1657---

The juice or decoction of the young branches, or the seed or powder, taken in dink purgeth downwards phlegmatic and watery humours, therefore it is profitable for thofe that have dropfy, especially if it be ufed in wine. It is effectual like wise for thofe that are troubled with gout, sciatica and other paines of joyntes.

It purgeth both upwards and downwards efpecially the feed which taken at the quanitity of a dram in meade or honeyed water purgeth by vomit, as hellebore doth yea without trouble or danger.

An oxymel or syrupe made of flowerf, seed and vinegar often ufed, breaketh and healeth all impostumes of the spleen by cafing corrupt matter to void itfelf and draweth humors from the joynts.

The images on this page may be reused However, the name of the relevant author must be attributed along with accompanying license.