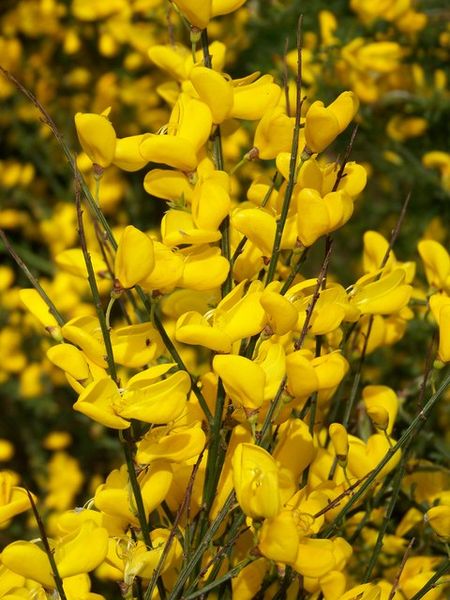 The common broom belongs to the order of plants known as the Fabeles and the family within that order Fabaceae {pea and bean family}. The generic name of Cytisus derives from the Greek Kytos alluding to the Greek Isle of Kythnos,one of the Cyclades. The species name of scoparius is taken from the Latin for broom and Greek sarothamnus indicating to sweep and a shrub.

It is also referred to as Genista scoparius.Genista deriving from the Latin indicating a nearly leafless shrub.

Here we look at the species and its past and present medicinal, and other uses of this familiar shrub along with historical observations and cultivation tips. As always we commence with a description of the species under review. 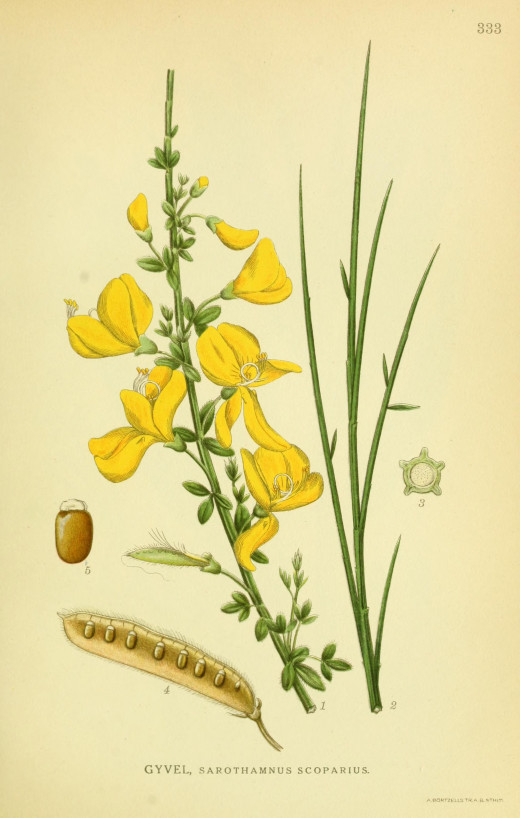 The root of this familiar shrub is hardy,woody and of a yellowish colour,furnished with several oblique fibres. The stem is shrubby,ascending,angular,from 3-8 feet in height. It is branched with numerous straight, flexible,long angular,smooth evergreen twigs.

The leaves are alternate,hairy when young,the lower ones shortly stalked with three small oblong leaflets the upper ones ,near the tips of the bright green branches have no stalks and are often reduced to a single leaflet. if it grows in wet places it can develop three foliate leaves.

The flowers are large,bright yellow,which are produced alone or in pairs on simple stalks which are longer than the leaves. The calyx {sepals etc} is tubular of a purplish colour,divided transversely into two lips,of which the upper one is entire,or with two small teeth,the lower three toothed.

The corolla { petals etc} is composed of five petals. The standard is large and broadly ovate and reflexed. The alae or wings are elliptical,spreading, convex and united with the filaments,the Keel is formed of two petals united together at the margin,with soft hairs. there are ten filaments,nine of which are united at the base ,unequal, incurved and support oblong orange coloured anthers.

The legume {seed pod} is flattened,oblong, hairy at the margin, green at first turning brown and almost black when ripe.It contains many seeds,which are roundish and compressed and shining.

This ornamental shrub grows abundantly in dry sandy and waste places flowering in May and June. from a distance the flowers and general appearance can be mistaken for the Gorse bush.

The broom has been applied to many useful purposes in the domestic economy and in agriculture in days gone by. The flowers buds pickled in vinegar has been substituted for capers,and the roasted seeds have been proposed as a substitute for coffee. The young and tender branches were once mixed with hops in brewing.

Historical records reveal,that in a little village in Tuscany,the stems of this plant were steeped in the hot springs which occurred in the vicinity,and furnished a very strong fibre,which was manufactured into a coarse cloth and cordage. In order to procure this substance the branches were cut and laid in the sun.When they were quite dry they were then tied up into bundles and thrown into the water,being loaded with stones to make them sink,in the same manner used for Hemp. When the twigs were sufficiently soaked,they were taken out of the water and placed upon a sharp stone. The bark was stripped off,and the fibrous part was well beaten. When dried it was carded and spun and used for the same purposes as flax.

The branches have been used for tanning leather,for thatching cottages and ricks,and made into besoms {brooms}. Did the plant take its common name from this use,or did the 'broom',take its name from the plant ? The answer has been lost in the mist of time.! Broom was utilized as a winter food for sheep and the old wood was regarded as beautiful material for veneering.

Anne Pratt, ' Wild Flowers' 1857, writes of the common broom " As the wood has flowers peculiar to it,and the meadow and the cornfield each have their own blossoms,so there are some plants which flourish especially on heaths and commons. Far away,over many a heath-land,we may see the bright golden blooms of the 'bonnie broom',and if on some sunny day in July, we stray among them,we may see the large dark brown broom pods opening to let out the ripe seeds.The blossoms seem to invite the butterflies to linger about them,and the bees keep a perpetual humming near them"

Wordsworth, describes it in his verse---

On me such bounty summer showers,

That I am cover'd o're with flowers;

And when the frost is in the sky,

My branches are so fresh and gay,

' This plant can never die"

I had rather seen the bonny broom,

Than the rarest flower that blows."

It is often planted to stabilize sandy soils on heaths and other localities by means of its roots.

Ripe seed pods of the broom 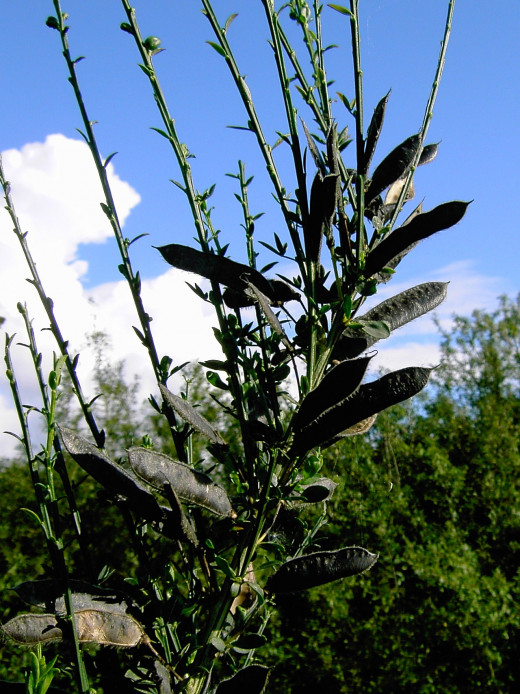 The leaves and stalks of the common Broom have a nauseous ,bitter taste,which they gave out by infusion,both of water and rectified spirit. The latter infusion is of a dark green colour. An extract prepared from the above possessed all the virtues of the plant. Broom tops have been esteemed for a long period as being cathartic and diuretic being most celebrated for the latter property.

Dr,Mead { Monita et praecepta medica page138 } relates to us a case of dropsy { a condition characterized by a build up of fluid in the tissues of the body cavity} of which,after every other remedy had been tried in vain, the patient was cured by taking every morning and evening half a pint of a decoction of fresh broom tops,boiled in a pint of water, until half of it was consumed,and of this decoction he gave two teaspoonsful every hour,till it operated the stool,or the whole was taken. It seldom failed to operate both by stool and urine,and by repeated exhibition, every day,or every second day,'some dropsies have been cured'

Sydenham, as well as many other eminent writers,particularly commended the alkaline salt obtained by burning the plant and passing water through the ashes,as a specific in dropsy. It could have been argued that this was no other than carbonate of potash,which could have been obtained from the ashes of any vegetable. It is true, that the remains differed in no respect from those obtained from other vegetables, however, it would seem this purification may have dispersed the most valuable part, that is, the essential oil of the plant,in which the medical virtue chiefly consisted.

For this reason the,plant was reduced to ashes by slow combustion, in an iron pot and a lay formed by passing water through the ashes which dissolved the salt. This was afterwards filtered through flannel,and then evaporated till the salt could crystallize on cooling. This,chemically speaking,would be very impure salt, but its efficacy would be greater than when purified.

This remedy was also employed in chronic diseases of the liver and spleen.The flowers infused in hot milk were applied to tetters and other cutaneous {skin} affections,the decoction at the same time taken internally. Ray,mentions the seeds and flowers are reputed to be emetic and catchartic, which Woodville appeared to doubt "because the former when roasted and used as a substitute coffee,and the latter employed as a pickle"

These objections seem to have been far from conclusive it is considered that the simple process of roasting and pickling was capable of dispersing even noxious qualities in many vegetables.

The tincture of broom seed was recommended in dropsy by Dr, Pearson, who prepared it in the following manner--

Take of Broom seeds,bruised, two ounces. rectified spirit -eight ounces. macerate for ten days then strain. The dose was administered at two to three drachms daily, in any aromatic vehicle

It appears that every part of the plant,seeds,leaves,flowers and root has, according to the old herbalists, some peculiar virtues and were praised in their quaint statements for 'helping pains' and 'altering fits of ague',for curing gout and many other ills.

The above information is for historical interest only and not meant in any way as a guide to self medication. Broom is now considered to be harmful.{ and toxic}.

The yellow flowers are typical of those of the Pea family. 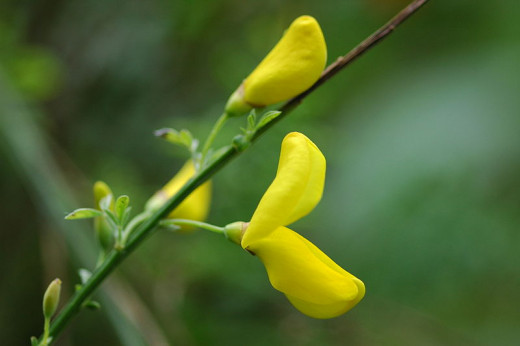 Modern day uses of the broom.

It is estimated that there are about fifty species of Broom that grow in northern and western Asia,all over Europe and north Africa. broom was introduced to North America in the early 1800's as an ornamental plant,however, it escaped over the garden wall and is now classed as an invasive species.

The isolavins in Broom are Oestrogenic {steroid}, but it also contains toxic alkaloides one of which is spateine which is considered to be cardio-active and therefore might be dangerous to anyone who suffers from heart conditions. Broom also contains tyramine which can heighten or lower blood pressure, which may also be dangerous. Broom products therefore should only be taken under medical supervision.

Broom is used in some modern day preparations by herbalists .Cardiac nerves and the electrical conductivity cardiac tissues are affected by Broom. The herb is employed to slow down and regulate the transmission of the nerve impulses in cardiac muscles.

Because of its strong diuretic properties the Broom is used as a medicine. It stimulates the production of urine and counters fluid retention in the body. However, Broom products should always be used with extreme caution and only administered by professional herbalists or physicians. Scientists believe that the components of the Broom are extremely variable therefore by definition unreliable. Pregnant or nursing mothers should also avoid its use unless it is administered by professional health care workers.

The FDA { America} considers the Broom an unsafe herb. They also state that Broom cigarettes may cause adverse cardiac effects such as headache,uterine stimulent effects and residual effects.

As a medicine Broom is not a plant to employ in homemade preparations and is better left well alone or administered with professional guidance.

Foragers.---The unopened flower buds of the common Broom can be used in salads or eaten straight from the shrub. I have done so on many occasions and I have lived to write the tale.

If you are trying this or any other herb for the first time try just a little first to test your body tolerance.

Note this species should not be mistaken for the Spanish Broom which is even more toxic. 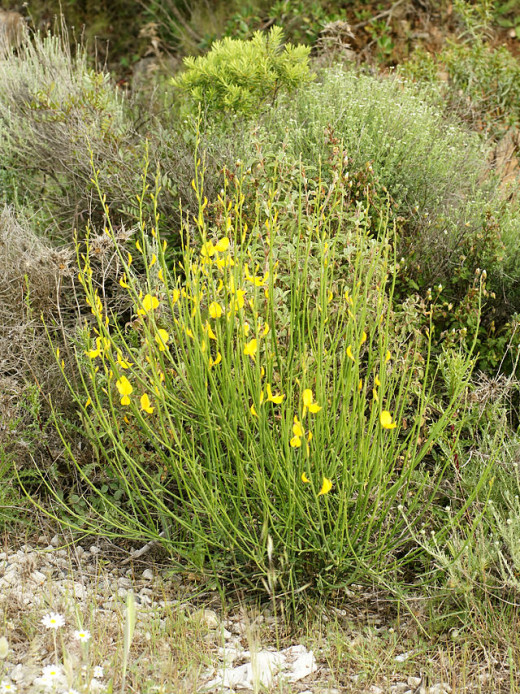 Broom and the garden

The Broom is considered as being either a lovely landscape plant or as an invasive 'wild weed' depending on your point of view, its type and location. The ornamental Broom is a somewhat sturdy evergreen shrub with a semi-upright habit and long whip-like evergreen branches covered with small leaves.

The pea like flowers bloom from late spring throughout mid-summer in shades of red and yellow,again depending on the variety.They are pest resistant and tolerate weather change and is considered to be ideal for a low maintenance garden.

Many ornamental shrub broom plants are available in nurseries and garden centers. many are hybrids crossed,and unlikely to spread like the wild and 'weedy' Cystisus scoparia. Once you have purchased a plant give it a good watering enough so as the water soaks right down to the roots. Once established the ground needs to be sandy or well drained as excessive water can cause the foliage to turn yellow.

A good layer of mulch will keep the weeds down. remove any seed pods from the plant and floor to stop it spreading. prune any damaged branches right back. Enjoy the show of the abundant flowers. 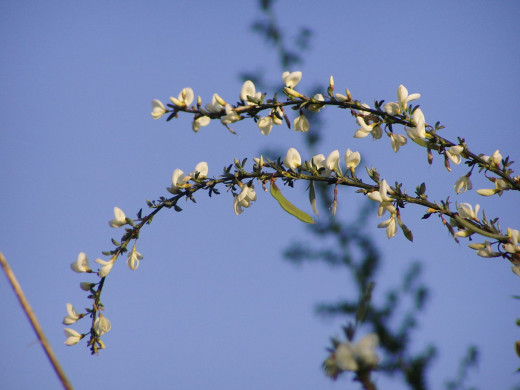 Cytisus multiflorus also referred to as the White Spanish Broom is a good garden variety.

Thank you for  visiting.