Mr Westell states,    "The Barbastrelle bat is a solitary species and can be regarded as one of the most uncommon. It differs from the Brown Long-eared bat { this species has a page on this site see content banners above scroll down to relevant page. Click, scroll down to read}, in having much smaller ears, and it is likely to interest those who take note of other anatomical differences, it may be stated that the Barbastelle has thirty four not thirty six teeth."

" It is, however, by means of an examination of the peculiar head that sure identity may be made, the abruptly truncated muzzle being set of by a groove, which proceeds up each side as far as the nostrils, the latter are situated in an hairless depression on the upper part of the muzzle. In addition to these peculiarities, the presence of black hair on the puffed out cheeks, and the broad ears which are almost as long as the head, add to the curious facial appearance of this interesting species. The fur is brownish -black  with light tips. It is worthy of mention that a white variety of the Barbastelle has been recorded,as,so far as we aware, albino bats are of very rare occurrence. "

" The flight is slow and even laborious, so much so, indeed, that it is easier to watch this species than any other flying mammal this country shelters. It possesses the habit of wandering about, having an unrestricted hunting ground. In consequence, one may never be surprised at meeting with the Barbastrelle in any retreat, though its comparative rarity is such that it may be counted as a red letter day when it is discovered.  It comes from its diurnal hiding place earlier in the evening than the Brown long-eared bat and appears to retire from its labours during the silent watches of the night, ceasing its insect-catching long before day break next morning.

" On one occasion we discovered in a porch a large collection of shorn wing-cases of flying beetles, as well as the wings of moths and other insects. The ground under the aperture was strewn with discarded remains, and the watch which was kept next evening resulted in one of these bats being seen in the act of bringing prey to its 'eating-house', a habit we have not previously seen recorded. The incident opened up a further interesting point in regard to bat life,as we were able to ascertain, with some degree of certainty ,the toll of insects taken every night by  these winged denizens of the air."

The barbastelle is a medium-sized bat, distinctive by its pug-shaped nose. The ears are broad, joined across its head by skin, and covered in gingery-brown fur on the rear surface. The tragus is triangular – broad at the base but with a nearly parallel tip which starts about halfway along its length. Vital statistics Head & body length: 40mm - 55 mm Forearm length: 35mm - 45 mm Wingspan: 260mm - 290mm Weight: 6g – 13g Colour: Fur dark, lighter tips on back. Skin surfaces black or dark brown.

The barbastelle is very rare, found in southern and central England and Wales. Very few breeding sites are currently known in the UK and it is important that surrounding environments of these and winter hibernation sites are maintained. It is thought that they prefer pastoral landscapes with deciduous woodland, wet meadows and water bodies, such as woodland streams and rivers. The extensive loss of deciduous woodland in the UK may be a significant factor in the rarity of this species. Use of artificial fertilisers and pesticides reduces insect diversity and may lead to indirect poisoning of bats, and pesticide run-off in water can severely disrupt aquatic insect abundance. Bats foraging over wet meadows mostly prey on micromoths, therefore measures to improve the quality of water meadows for the benefit of micromoths will provide better foraging opportunities for barbastelles. The barbastelle is a UK Biodiversity Action Plan species, which means that it is a conservation priority on both a local and national scale. The Bat Conservation Trust is the lead partner for the barbastelle bat Biodiversity Action Plan. For more information visit www.ukbap.org.uk

The see the fact sheet on this species visit www.bats.org.uk or click on the links banner above. Scroll down to relevant box. Click, this is a direct link to the site. 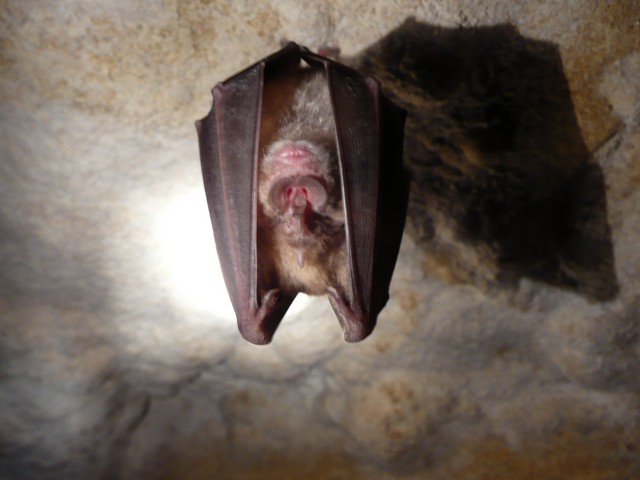 Mr Westell, states about this species, ---" All our British bats are insect-eaters,and should, in consequence, be encouraged; The Greater horseshoe bat belongs to the genus Rhinolopthus. The two British species may be distinguished by the possession of a prominent nose leaf which entirely surrounds the nostrils, these latter being situated in a depression of the snout. They also have well developed ears of large dimensions, and these, as a rule, are set wide apart on the head. The shape of the nose leaf also deserves mentioning, as it is made up of two portions, the one directly over the nose being shaped like a horseshoe.and the lower one is pointed. Enjoying a wide range of territory abroad, the Greater horseshoe, so called on account of its larger size,is, nevertheless,  is rarely seen except in our southern counties. Occasionally it wanders further afield, but has never been recorded from the north, and has yet to be claimed an inhabitant of the Emerald Isle."

" It shows a liking for caves, old buildings and similar retreats,leaving its diurnal resting place when nature is preparing to assume the robe of the night. The question may well be asked; ' Of what use is the curious nose leaf after which this species acquired its popular name?'  The answer is given by one of our foremost Zoologist, the late Mr Richard Lydekker, to whose labours we are indepted. ' There seems little doubt that the nose-leaf of these bats is especially intended to aid them in avoiding obstacles during flight, as most, or all, of the species fly later than them that are unprovided with these appendages'.

" Another observer states that, when seen upon the wing, the Greater horseshoe appears as large as the Noctule {see part 2], but may be distinguished by the greater proportionate width of the wing-membrane."

The horseshoe bats can be distinguished from other British bats by the presence of a complex horseshoe-shaped noseleaf which is related to their particular type of echolocation system. When roosting they hang free with the wings more or less enfolding their body. The greater horseshoe bat is one of our largest bat species, the size of a small pear. Vital statistics Head & body length: 57mm - 71mm Forearm length: 54mm - 61mm Wingspan: 350mm - 400mm Weight: 17g - 34g Colour: Adults buff-brown, juveniles greyish.

The greater horseshoe bat has shown a marked decline. It is rare in Britain and now confined to southwest England and south Wales. It is estimated that the number of greater horseshoe bats has declined by over 90% in the last 100 years. The decline of the greater horseshoe bat may be due to factors such as disturbance of roosts and intensive agricultural practices including loss of permanent pasture. These bats are particularly sensitive to disturbance at their nursery and winter roosts. Those sites need to be specifically protected and entrance holes left unobstructed. The conservation of the species’ feeding habitats and food sources is also important. The use of pesticides has led to a decrease in availability of larger beetles, particularly cockchafers, and moths over large areas of the countryside. to read more and for a fact sheet visit www,bats.org.uk.

Mr Westell, states,---" The Lesser horseshoe bat, the last species, that we are here concerned,has, unlike the Greater horseshoe, been recorded in Ireland, but favours more or less the same haunts. It is of Gregarious habits, and, when a long frequented hiding place is discovered a large colony can be found. "

The lesser horseshoe bat is one of the smallest British species, being around plum-sized. At rest it hangs with the wings wrapped around the body . Like the greater horseshoe bat, it has a complex noseleaf which is related to its particular type of echolocation system. Vital statistics Head & body length: 35mm - 45mm Forearm length: 35mm - 42mm Wingspan: 200mm - 250mm Weight: 5g - 9g Colour: Adults pinky buff-brown, juveniles greyish (until a year old).

This species has shown a marked decline in numbers and distribution, although there is evidence of a recent increase in Wales. The lesser horseshoe bat is rare in the British Isles and is confined to Wales, western England and western Ireland. The decline of the lesser horseshoe bat is attributable to several factors, including disturbance to roosts and intensive agricultural practices. Lesser horseshoe bats are particularly sensitive to disturbance, especially in their nursery and winter roosts, and these sites need specific protection. Sensitive management of their foraging habitats is very important.

For the fact sheet on this species visit the  www.bats.org.uk/about bats

On the Bat Conservation Trust site information can be found of the other British bat species which are as follows.

Alcatho bat. Only confirmes as a resident species in 2010, due to its similarity to the Whiskered bat.

Brandt's bat only separated as a distinct species in 1970.

Nathusius pipistrelle, classed as a resident since 1997.

The brown long-eared bat can be viewed by clicking on the relevant content banner above. Click and scroll down to view.