Mr Westell, says of this species," Because of its fondness for the vicinity of water, this species is also called the water bat. It is somewhat local in distribution, and although occurring in England,Scotland and Ireland, it appears not to favour the principality of Wales. It belongs to the genus Vespertillio { Now in the genus Myotis, in the Family of bats Vespertillionidae }, the members of which are characterized by the number and position of teeth, and also by the long rounded ears."

" One authentic observer, states the interesting fact, that,whilst some of these bats inhabit woods,caves, and under the roofs of houses, those which tenant the first two abodes mentioned are specially adapted in so far as the structure of the foot is concerned.That is the cave dwellers have larger feet than the woodlanders, and these feet are almost free of membranes. But in the case of individuals that prefer the woodland fastness, the much smaller feet are enclosed in the wing membrane. This adaption, according to the nature of the environment, is intensely interesting, and provides ample material for close study. Indeed, it is important to note that wild creatures, like their human prototypes, appear to vary even in one and the same species."

" The wing -stretch {span} is about nine inches,and although the colour of the fur is subject to a great deal of variation in different individuals, the general colour is reddish-brown above, with ash grey beneath. the base of the fur is brownish-black. Frequenting, as it does, the vicinity of water,searching for insect prey just over the surface, it is only expected, that a slow, hovering flight is engaged in. So close does it fly to the surface of the water, that, every now and again,it actually dips into the water; but it remains an open question as to whether it does so in pursuit of an insect denizen of the mazy pool, or for the purpose of drinking. Where it does occur, numbers may be discovered hunting in close proximity to one an other. "

Daubenton’s bat is fairly widespread up to northern Scotland, in Ireland and on the Isle of Man. Despite severe loss of and damage to wetlands and waterways, Daubenton’s bat seems to be increasing in parts of its range. This may in part be associated with the increasing number of artificial water bodies, including gravel pits, reservoirs and flooded quarries. Also a low level of pollution may encourage a more consistent supply of certain insects. However, the loss of diversity of aquatic insects has a detrimental effect on other animals and without very careful pollution controls would also affect Daubenton’s bats. The removal of waterside trees and disturbance to hibernation sites could also lead to a decline in this species.

For more information click on the links banner in the content banners above. Scroll down to Bat Conservation Trust {Bats.org.uk } click, this is a direct link to the site.

Mr Westell, States " The whiskered bat is somewhat smaller than the above species both in body length and wing-stretch {span} . It has been accorded the forepart of its popular name because of the 'whiskers' situated upon the upper lip. These are made up of a fringe of ,long fine hair. Unlike the Daubenton's bat  the Whiskered bat is mostly a solitary species, and a careful look-out must be kept for it, if success is to be obtained. Curiously enough, on occasions a number may be seen hawking together. When this interesting event takes place, it has been suggested that an appearance of a prolific food-supply is a direct cause of the phenomenon."

" This bat is dressed in a fur of dark chestnut on the upper parts, with a tendency towards black, and dusky colour below. Those that are familiar with the life and habits of the Pipistrelle {see part -1 in this series} will best appreciate the statement that the same observations hold good with regard to the species now being considered. The situations frequented are quite as varied as those of the better known species, and to avoid confusion, careful watch should be kept so as to learn the way to distinguish one species from the other"

Whiskered bat is very similar to Brandt’s bat and the two species were only separated in 1970. Both are small species with somewhat shaggy fur – Brandt’s bat is slightly larger than whiskered bat. The two species are most reliably separated by differences in dentition and penis shape. Other distinguishing features are thought to include tragus shape and claw length. Vital statistics Head & body length: 35mm – 48mm Forearm length: 30mm – 37mm Wingspan: 210mm – 240mm Weight: 4g – 8g Colour: Fur dark grey or brown, golden tips on back, greyish underneath.

Whiskered bat is thought to be slightly more common and widespread than Brandt’s bat. It is found throughout England and Wales and even in southern Scotland and throughout Ireland. They are vulnerable to the effects of modern agricultural practices and decline of woodland, which result in loss of suitable feeding habitats and hollow trees for roosting. They are susceptible to pesticides, especially those used as remedial timber treatment chemicals. Disturbance and vandalism of their hibernation sites (caves and tunnels) is an additional threat. 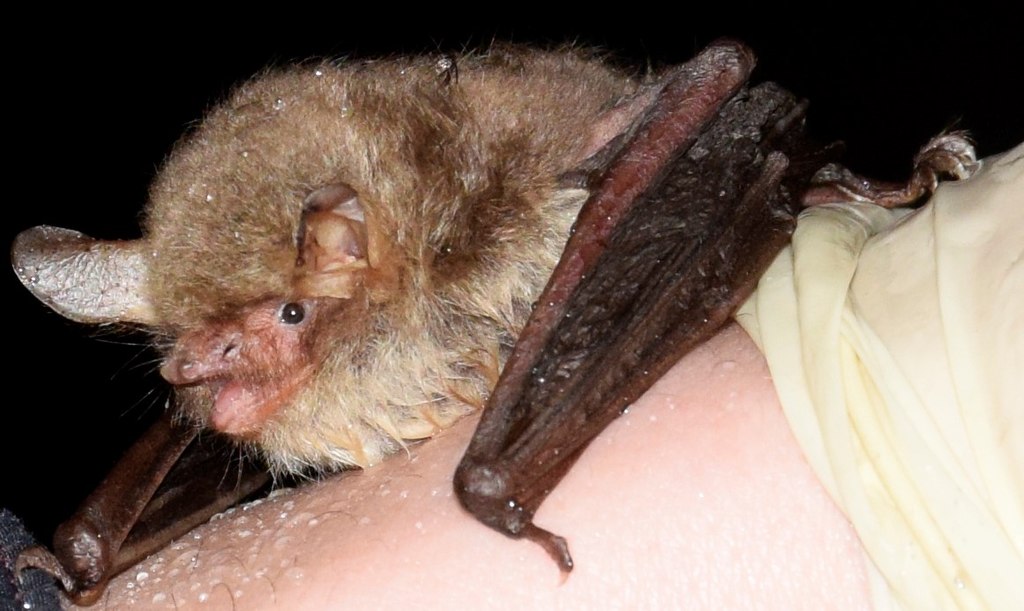 Mr Westell states,  " The Reddish-grey fur of this species has resulted in the colour being perpetuated as a second name for the Natterer's bat, though it necessary to point out that the under-parts are replaced with whitish.  It is not by any means common, although of social disposition, congregating in church towers and other buildings in large numbers. We have known a colony of three hundred being discovered under the roof of one house, and when the whole of these animals were captured and placed in a large, open box, the effect of these writhing bodies can be better imagined than described. Fortunately, it was not the intention to harm or do away with these interesting tenants of an old country house and after a series of observations had been made concerning them, the bats were given their liberty at nightfall,when the shades of eve afforded them protection and their appetites were ready to be appeased."

Natterer’s bat is a medium-sized species. The ears are narrow, fairly long and slightly curved backwards at the tip. The inner lobe of the ear (the tragus) is long, narrow and sharply pointed. A characteristic feature of this species is a fringe of very stiff bristles along the trailing edge of its broad tail membrane. Its rather pinkish limbs give rise to its old name of ‘red-armed bat’. Vital statistics Head & body length: 40mm - 50mm Forearm length: 36mm - 43mm Wingspan: 245mm - 300mm Weight: 7g - 12g Colour: Fur light buff brown on black, white underneath. Bare pink face

Distribution & conservation Natterer’s bats are found throughout most of the British Isles. Recent records have extended its range in Scotland north to the Great Glen fault. Generally it is a scarce and poorly known species. The UK population of Natterer’s bats is of international importance. To conserve its summer roosts, the conversion of barns should be discouraged and the maintenance and remedial timber treatment of other older buildings need to be carefully monitored. Important wintering sites should be protected. Feeding habitat requirements are poorly known.

For more information and fact sheet click on the links banner above. Scroll down to Bat Conservation Trust {bats.org.uk} Click this is a direct link to the site.

Bat Conservation Trust. {bats.org.uk}    Click on the Links banner above. Scroll down to the relevant box. Click, this is a direct link to the site.