Mr Westell states  "  Coming directly to those weird flying mammals, the bats, it is astonishing to notice the ignorance that still prevails concerning them. Even in country districts,where the average person of intelligence should be acquainted with them, we have often heard the most extravagant notions expressed  as to the life and habits of these haunters of the silences.

" That bats produce their young alive and suckle their young, deserves emphasis thus early in our story. Being, as a general rule,creatures of the night,living exclusively on a insect diet,consisting of beetles, mothers and other insects which are captured on the wing,and mostly hiding their sombre forms in barns,church towers, ruins, caves,quarries hollow trees and other retreats by day, small wonder need be expressed at the amount of ignorance that is still rife. There,is too, an existent predjudice associated with these 'flitter mice',as the country people call them,which,as with the snakes,lizards,earthworms and centipedes and other animals,makes them unpopular with the average individual."

" This is all the more regrettable because bats, do not, as they say in Scotland, harm beast or body. On the other hand,they are distinctly useful creatures in the economy of life,and should receive every encouragement it is within our means to bestow upon them"

" The  bat, is one of the three is one of the three most familiar British species, and,by reason of its size,it is also known as the Great bat, the wing-stretch extending several inches. It has broad, rounded ears, which occupy a position on the extreme corners of the head, with the upper parts of the body yellowish-brown, and a fainter tinge beneath."

" Bats that inhabit our own country are  mostly gregarious, and the Noctule is no exception to this rule. Where bats congregate, especially in winter, when, with the exception of the Pipistrelle and perhaps one or two others, they hibernate, or lay up for several months in a state of suspended animation,large numbers may be found together. They cling to one another by means of sharp 'claws', evidently firm believers that 'Union is strength'.

" Upon the ground they are awkward and ungainly, shuffling along in a cumbersome way unpleasant to witness.  The air is their home, and in this respect they remind one of the swift, a bird which,owing to the shortness of its legs and the long sickle - shaped wings, is often unable to rise when once it finds itself upon the ground."

" Possessed of wonderful powers of endurance upon the wing, darting hither and thither unceasingly in the gathering gloom; keen-eared and maybe keen scented, with sensitive,membranous wings,situated on a framework which may be likened to the ribs of an umbrella,the bat is admirably fashioned for the work it performs with such unerring vigilance. it needs a sensitive ear to catch the note uttered by a bat as it flits rapidly past.but the tree-loving Noctule is not so difficult to hear, as it emits a shrill sound when it pursues its airy pilgrimage. As one watches it just before dusk, flying on a warm summer's evening in search of cockchaffers and other night flying insects, a series of remarkable evolutions is displayed, of never ending interest to the zealous student of wildlife".

" Chief among these exploits in mid-air are the power upon the wing, the sudden hovering like a bird of prey {such as the Kestrel}, an unexpected falling motion of several inches, due to the bat having caught its prey, and requiring use of its 'thumb',to adjust the tit bit it has just secured. It has strong jaws and a broad muzzle, both well calculated to aid the Noctule in obtaining its living, and to see several of these winged creatures hawking together at nightfall is an experience not easily forgotten".

The above paragraphs are  an historical perspective, and, echo relocation the main tool in the bats array of skills, in the art of capturing their prey, had not been scientifically discovered. Today's naturalist also has the opportunity to hear every species of bat with the aid of bat detector box, again not available to the Westell era.

Habits and life style   Courtesy of the Bat Conservation Trust.

General Noctules have a characteristic powerful, direct flight on narrow pointed wings.They fly in the open, often well above tree-top level, with repeated steep dives when chasing insects. Noctule bats can fly at 50 kph. Most food is caught on the wing and eaten in flight but occasionally prey is taken from the ground and in suburban areas noctules are attracted to street lamps to feed on moths. During spring noctules will feed mainly on smaller insects such as midges, changing their diet to take beetles and moths later in the season. They forage mainly at dusk for up to two hours and for about half an hour at dawn. They are known to fly over 10km from roost to feeding areas.

To read much more visit www.cdnbats.org.uk/pdf/About%20Bats/noctule_11.02.13.pdf

or for more general information about bats visit www.bats.org.uk/about- bats

Once again I refer to the paragraphs of Percival Westell's book British Mammals printed in the early 1900's for his perspective of the species at that time.

"Claiming kinship with the same genus 'Vesperugo' {Now placed in the genus Pipistrellus}, the little pipistrelle attracts our attention. This species is easily the best known, and has it is a day-flyer as well as a night prowler, the observer is more likely to be conversant with it. We have seen it insect-hunting, on a mild sunny day in December, and sometimes in the early spring, when two or three were observed scouring the surface of a wayside pond for food, we have frequently mistaken the flying mammal for that welcome harbinger of summer, the fairy-like swallow."

" The pipistrelle has a wing-stretch of about eight inches. The fur is long and silky, reddish- brown above dusky below. This species is an inhabitant of the whole of Europe and also extends to the temperate parts of Asia and northern Africa. It comes from its winter retreat earlier than any other British Bat, and also frequents dwellings to a far greater extent than any of its relatives. It is a swift flyer, with quick movement of the wing, turning and twisting with great rapidity in search of prey, which, it is believed, mostly consists of gnats. It is probable that its excursions are for this reason frequently undertaken in the neighbourhood of water, where the insects in question delight to congregate"

Pipistrelles are the commonest and most widespread of all British bat species. There are two very similar species, common pipistrelle and soprano pipistrelle. Pipistrelles are the bats that you are most likely to see. They appear fast and jerky in flight as they dodge about pursuing small insects which the bats catch and eat on the wing. A single pipistrelle can consume up to 3,000 insects in one night! Vital statistics Head & body length: 35mm - 45mm Forearm length: 30mm - 35mm Wingspan: 200mm-235mm Weight: 3g - 8g Colour: Medium to dark brown. Face and around the eyes usually dark

Habitats Common pipistrelles feed in a wide range of habitats comprising woodland, hedgerows, grassland, farmland, suburban and also urban areas. They generally emerge from their roost around 20 minutes after sunset and fly 2-10m above ground level searching for their insect prey, which they catch and eat on the wing by ‘aerial hawking’. Summer roosts of both common and soprano pipistrelles are usually found in crevices around the outside of often newer buildings, such as behind hanging tiles, soffit and barge or eaves boarding, between roofing felt and roof tiles or in cavity walls. This species also roosts in tree holes and crevices, and also in bat boxes. Summer roosts support smaller colonies than soprano pipistrelles, with numbers averaging around 75 bats. Common pipistrelle maternity colonies are more likely to move between roost sites than those of soprano pipistrelles. In winter common pipistrelles are found singly or in small numbers in crevices of buildings and trees, and also in bat boxes. They are often found in relatively exposed locations and rarely underground. Diet Feeds mainly on a wide range of small flies as well as the aquatic midges and mosquitos

To read much more visit www.bats.org.uk/about-bats/what-are-bats/uk-bats 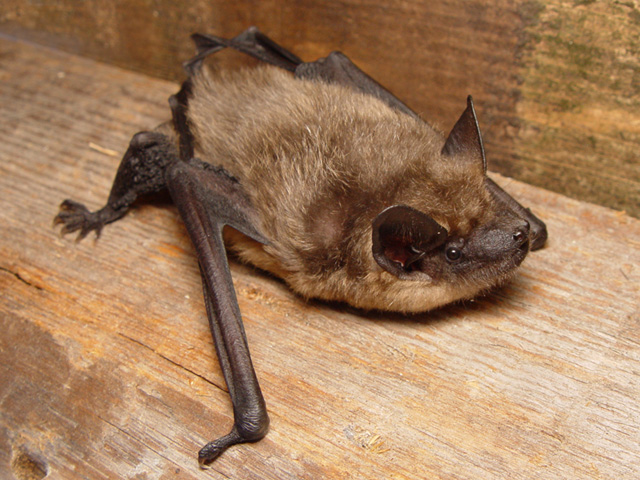 " The Serotine bat is decidedly local in its distribution. it possesses broad, round tips upon its moderate-sized ears, with a fur of chestnut above and yellowish-grey below. This species,however, is subject to colour variation, although the long silky hair, and almost black wing-membranes,are present in all specimens observed. The serotine needs special mention from the point of view that it is the most widely distributed species of bat ans, moreover, its insect prey."

The diet of this species consists of mainly flies and moths in summer particularly chafers and dung beetles. It is found in the southern parts of England and southern wales. It is a less common species than the previous two. Sadly numbers are declining.

Echolocation or how bats catch their prey

Bats are not blind, but at night their ears are more important than their eyes. As they fly they, make shouting sounds. The returning echoes give the bats information about anything that is ahead of them, including the size and shape of an insect and which way it is going. This system of finding prey is called echolocation - locating things by their echoes.

In part two of this series.

In part two of this series more species of British bats will be under the spotlight.

Click on the links banner in the content banners above. Scroll down to the relevant box. Click, this is a direct link to the Bat Conservation Trust.