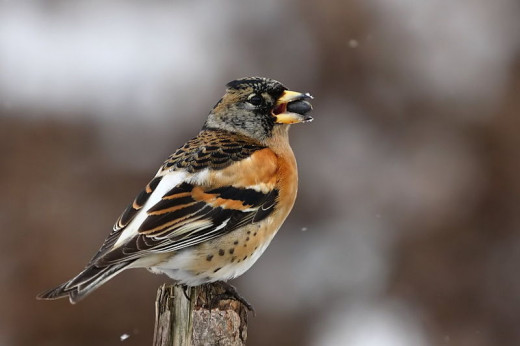 The Brambling , Fringilla montifringdilla is a handsome little finch belonging to the Order of birds known as the Passeriformes { perching birds} and the Family Fringillidae. Its generic name of Fringilla derives from the Greek Phrugilos meaning a sparrow described by Aristotle. the species name montifringilla derives from the Latins mons indicating a mountain and fringilla indicating a finch.

it breeds in Eurasia and winters south to southern Europe and central Asia. In winter it may be encountered in large flocks where its main food , the seeds of birch and beech are abundant. In the UK it is placed on the Green list of conservation concern { no current concerns} where it is classed as a scarce breeder and a passage winter visitor. During the winter months there are an estimated 930,000 in the UK. It is not a species of concern in Europe where 3-7 million pairs are estimated to occur.

The Gaelic name for the bird is Breacan-caorainn, the Welsh,Pinc-y-Mynydd and the Irish Breacan.

Here we review the species, its lifestyle and habits with an historical perspective from past ornithologists. As usual we start the review with a description of our subject. 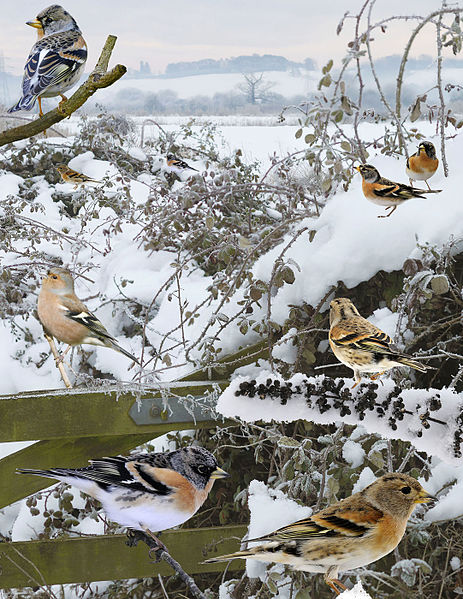 The adult male in breeding plumage has the upper parts blue-black, some of the feathers with tawny margins, the middle of the lower back and rump are white. The head is black in summer and brownish black in winter. there is an orange buff on the shoulders. Both sexes have orange buff breasts. The tail is forked. The bill is stout blue black in spring and summer turning yellow in autumn and winter. The legs are flesh brown.

The flight is bounding and on the ground it hops or walks. The white rump quickly picks out the Brambling from mixed flocks of finches. The male can be told from the similar looking chaffinch by orange shoulder patch and black or brownish black head. The female from the female chaffinch by the orange buff breast and no white on the shoulders. The orange buff breast distinguishes it from the Bullfinch which also has a white rump { but does not flock}. In England they are often encountered with Chaffinches, feeding under beech trees in winter.

Brambling and chaffinch often flock together in winter. 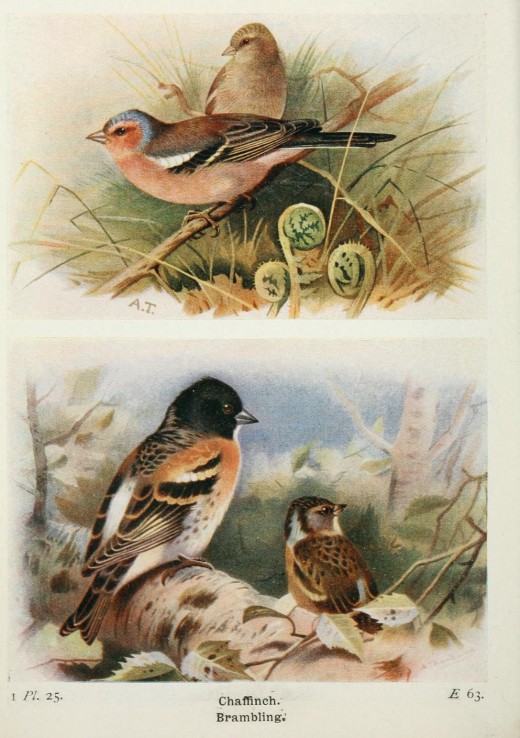 During the winter the mixed flocks that roam the countryside , through woods and fields, get along amicably. Seebohm who observed them near Sheffield {Yorkshire England} during the 1800's writes, " They are remarkably noisy birds, and sit upon the tree tops twittering to each other until dusk. They sometimes fly up into the air in a compact mass, and after wheeling round several times again alight. They roost in the Yew and Holly trees, and a fair proportion of them seek quarters in the Ivy."

Like the Chaffinch this species feeds largely on insects during the summer months and on various kinds of seed during the winter. they also feed on beech mast and other seeds of noxious weeds. When on the ground it runs or hops but chiefly the former. The call note is usually described as a harsh chirp.

They were once commonly sought after for aviaries and as cage birds, here are a couple of historical accounts relating to the birds in captivity---

Mr Butler conveys to us that a pair of Bramblings formed part of his little collection which he commenced his studies in aviculture. he kept them with a pair of Goldfinches, a Hedge Accentor {Dunnock} and one or two other birds in a large home made flight cage. These he said were the worst tempered Bramblings he had ever had, they disputed incessantly , and at first gave the hen Goldfinch a wretched time of it, viciously pecking her whenever she went down to feed near them. But one day the male Brambling made a mistake and pecked the male Goldfinch, which simply sprang at him, grasped his body with its claws and tore a bunch of feathers from his breast. After this both Goldfinches were left alone.

Mr. Butler continued to tell of other experiences--In 1886 I purchased a charming male bird of this species, so gentle and tame that its plumage was always in perfect condition. It was very fond of bathing and sang regularly in the Spring. It was , as it turned out, unfortunate that I kept this example in a cage, and, at its third moult, all its quills grew out like fans, giving the bird a most wild and uncanny aspect. Indeed it was such an object that I gave it to a child who had taken a fancy to it.

In 1889 I again purchased a Brambling from a bird catcher , and turned it into a good sized aviary with other British species. It soon became very fairly tame, sang well each spring, and rarely made itself objectionable to its associates. It lived particularly well on seeds, but ate a certain amount of soft food and any chance insects. The plumage of the bird was so perfect that a friend who greatly desired it to have for show purposes persuaded me to let him purchase it from me.

Bramblings visit the UK late in the Autumn and leaves us again in the following spring. The visits are irregular and somewhat erratic and districts that play host to hundreds of birds one year may be deserted the next. However, they are generally well distributed throughout in winter. Soon after they arrive they frequent the back woods to feed upon the beech mast, and they may be observed busily shelling out the coveted nuts from their hard cases. The whole flock keep up a noisy clamour of twittering notes and at this time they can be approached more easily than other wise would be the case.

During the winter a favoured haunt is the freshly manured fields, are they looking for insects to supplement their diet ?. They do not approach the swellings of man unless severe weather compels them to do so. In common with most finches, Bramblings tend to go to roost early, which is for them about the time of the sun setting. They may be observed at this time retiring to the safety of Trees such as the Yew, Holly and Ivy are often chosen.

This charming little bird was once trapped for food, Swaysland,  {Familiar Wild-birds} relates-" as an article of food some persons profess to admire the flesh of the Brambling, but the taste is bitter and not likely to become generally excepted."

The site chosen for the location of its nest is usually at a height of between fourteen and twenty feet from the ground, in a birch or fir tree. It is generally situated at the junction of a branch with the trunk, although there are examples recorded, of the nest being located in Juniper bushes.

in his 'Catalogue of Birds of the Dyke Road Museum, at Brighton'{ page 126 } , the Late Mr. E.T. Booth states--" In the summer of 1866, while fishing on the River Lyon in Perthshire {Scotland} I had occasion to climb a beech tree, to release the line which had become entangled in the branches, and while so engaged, a female Brambling was disturbed from her nest, containing three eggs, which was placed close to the stem of the tree. As I was anxious to procure the young, {legal at that time} I left her, and on visiting the nest a fortnight later the nest was empty, and, judging by its appearance, I should be of the opinion that the young birds had been dragged out by a cat. It is the only instance I have ever known of a Brambling attempting to rear its young in Britain."

In the 'Field' Magazine for July 23, 1864, the Rev. J.C. Atkinson recorded the fact of a nest with five to six eggs having been taken at Baldersly Park , near Thirsk in Yorkshire { Northern England }. These are two examples of the rare findings of the nest of this species in the UK.

The nest is more coarsely constructed than that of the Chaffinch, being formed of white and buff birch bark, moss, lichens and spiders webs and lined with fine grass and feathers. The eggs number five to seven and are incubated by the female for eleven to twelve days. The chicks are born blind and helpless. They are fed entirely on insects and their larvae, which soon help the chicks to grow and in a further fourteen days they are ready to leave the nest.

Eggs of the Brambling. 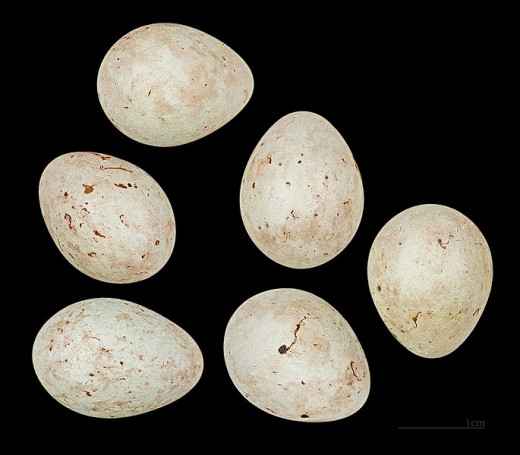 Europe- They are a species of least concern