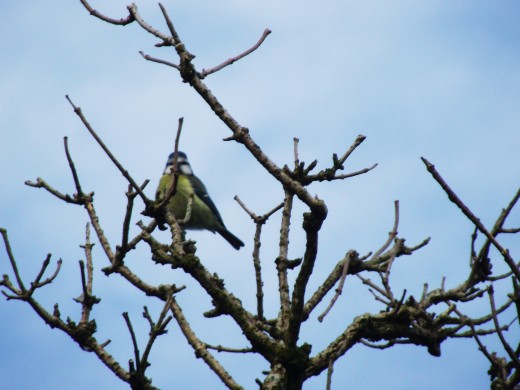 The most compelling evidence of spring is the increasing bird activity. The feathered throats are being exercised once more in anticipation,the suns warmth and the lengthening days, encourage optimism. The song thrush releases his repetitive notes with renewed vigour with every passing dawn, the robins sweet melody cascades from the rowan and the green finch calls from the hedgerow. The great tits strident notes reverberate around the leafless boughs and the greater spotted woodpecker's drumming welcomes visitors to his woodland home

Among this renewed frenzy taking place in the tree top twigs one bird in particular brings me much pleasure-the cheeky little blue tit. Observing this bird in its pursuit of insects is an observation of avian acrobatics as the little bird turns this way and that, and it is not unusual to see them hanging upside down with amazing agility it is indeed one of the most charming little birds that we possess. My admiration for the blue tit is enhanced by the way he shares winter's onslaught with us never once showing an inclination to leave for warmer climes.

So common are they to many people that they are often over looked or ignored which is a shame for nature has endowed this little creature with some beautiful colouring. seen in his best attire, a male blue tit is a dapper little bird.  The bright blue on his head, wings and tail give the bird its common name. these are enhanced by white cheeks and patch on nape, yellowish green mantle, and yellow underparts. the short bill is black and the legs are dark grey blue.

In relation to its body size the wings are of a medium size as is the tail. the neck is short and the bill very short. The legs are medium. It flight is weak and undulating ,they tend to fly short distances and the flight is rarely prolonged. The blue tit hops but will readily creep up the trunk of a tree in the manner of the tree creeper. They are {in the U.K.} The only small bird that is predominantly blue. The only other small bird with a white nape patch is the black-capped coal tit which is of a similar size.

The blue tit is very sociable after the breeding season and often roams in flocks forming the bulk of the flocks that may also include goldcrests and leaf warblers. They are to be encountered in woods, copses, orchards, gardens and other places with scattered trees. 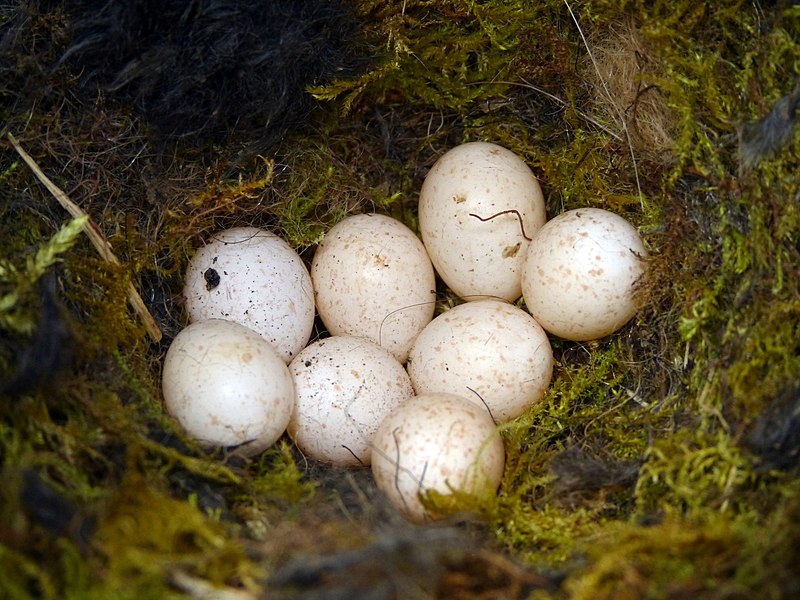 In common with nearly all other British tits the little " tom tit" seeks out a hole in which to build their abode. In its natural woodland home it will no doubt be content with those in old trees, or in rocks and banks. in such sites the nest is usually placed close to the ground. But as a bird of town or garden it has taken to building its nest in the most strangest of places, in the tops of lamp posts { street lights} holes in garden walls, disused jars and inverted flower pots.

They take readily to nest boxes provided they are placed not to high and away from the attentions of prowling cats. The entrance hole should be just large enough to allow access to the bird but to small for sparrows or starlings to get in. An entrance hole of just under an inch wide is ideal. The nest itself is a shapeless mass of soft materials such as wool, moss and hair packed together closely together in a cup like hollow.

The eggs are numerous vary from 7-15 although 8 is more the norm. it is thought that very large clutches containing more than 15 id down to two hens using the same nest. The eggs are like the bird that lays them very small, white in colour speckled with pale red.

The parent birds defend their nests with great courage the male will hiss and bite at intruders with great vigour. The young are fed frequently and studies have revealed that they continue to feed for up to 17 hours and the birds may well visit the young with food nearly 500 times in this period. The studies also revealed that much of this food was in the form of caterpillars and other small invertebrates many of which are considered as garden pests.

So despite the damage they may cause to some pears later in the year the good they do by destroying these garden pests make them a bird to be welcomed into the garden.

This blue tit was hunting for spiders around the satelite dish. 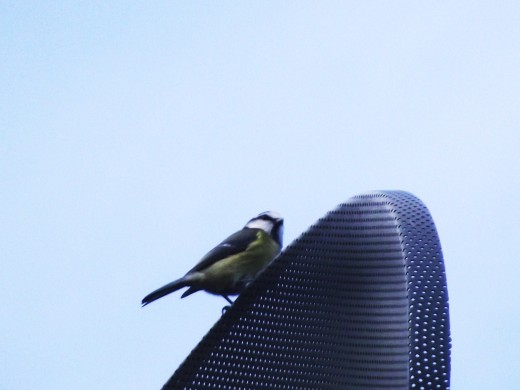 Population, distribution and notes of interest.

The Blue tit appears on the Green list of conservation concern which means there are no current concerns for the species. In the year 2000 {latest figures available} the British popluation was estimated at 3.3 million territories. In Europe they are of least concern with a population estimated at 19-42 million pairs.

Incubation of the eggs is carried out by the female. Around 15 days. The young are born helpless and naked. They are in the nest for around 21 days. First eggs are usually laid between April and May.

They belong to the family Paridae. Order of Passeriformes--{ perching birds}.

Europe. They are a species of Least concern.