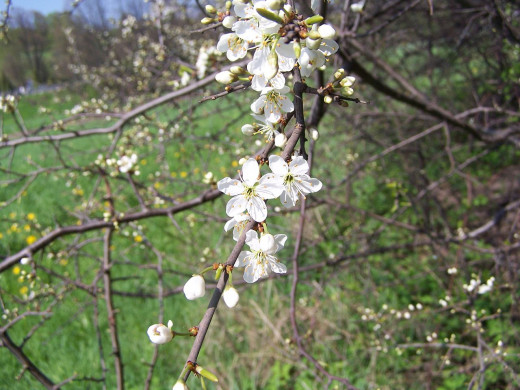 The text will be descriptive aided by images.

Most people start their tree identification with the form and colour of the leaves,which is all well and good during the summer months but in the winter when the leaves have fallen it is of little use in the identification process. Yet every tree has a character{s}, which will aid its identification even in the bleakest months of the year.

Here we review the Blackthorn a shrub/small tree which belongs to the Order of Plants known as the Rosales and the family Rosaceae within that order. They are placed in the genus Prunus and given the species name of spinosa.

This genus includes fruit species such as Plum,Cherry,Apple,Peach,Apricot and Almond. The fruits from this genus always contain stones. The species under review takes its common name from the dark,nearly black bark and its spiny thorns,which give rise to the specific name of spinosa.

Components of the Black thorn 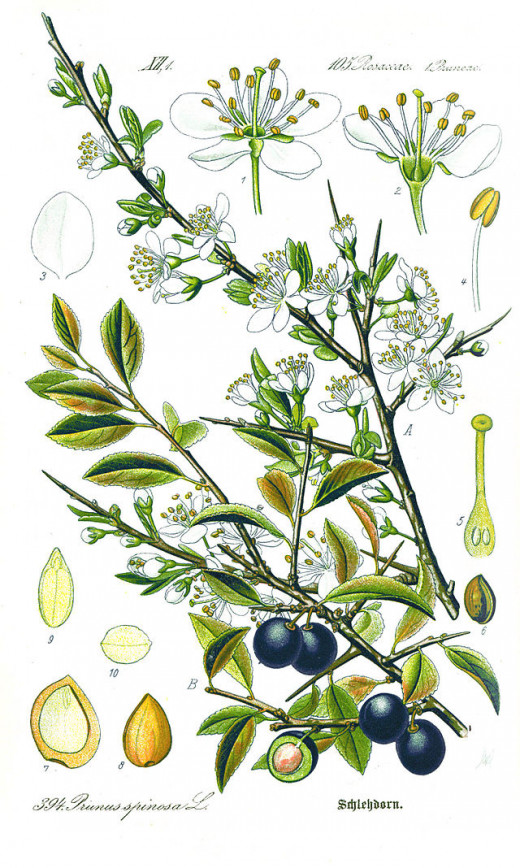 One cannot but admire the beauty of this species, our common Blackthorn {UK},and yet we sometimes wish to see the back of the beautiful snowdrifts of blossom and of the bitter winds of the 'Blackthorn winter' which almost invariably accompanies their presence. Desolate indeed,is the wintery look of its tangle of black,thorny boughs and twigs,forming some roadside hedgerow,or in clumps on some bleak hillside,and it remains desolate until the blooms furnish the still bear twigs with their beauty.From a distance one can be forgiven for thinking it may be remaining snow on the winter trees brought by the bitter winds from the north. However, as we get nearer, the foamy mass of starry milk white petals in all their beauty can be discerned .It does not seem long before the flowers fall when the leaves appear. { a few flowers may remain for a short time after the leaves have opened}. At this stage the tangled twigs with their sharp thorns and clothed in their greenery afford security and protection for our feathered fraternity ,many  of which delight to nest in its confines. Those blackthorns that appear on roadsides and on the margin of fields are particularly chosen.

Until the fruits referred to as 'sloes' become evident this shrub/small tree is fairly nondescript throughout the summer months However, in autumn---

Take the bright varnish of the morning dew"

The fruit at first has the bright purple-blue bloom of the common garden plum, but as the fruit ripens, it becomes a dull blackish purple, but not completely black. The fruit at any stage has a very bitter taste and many an unwary traveller can be observed to have contorted facial expressions after tasting them.

"Husband and wife"  Blackthorn tree. To reach this size they have attained a good age. 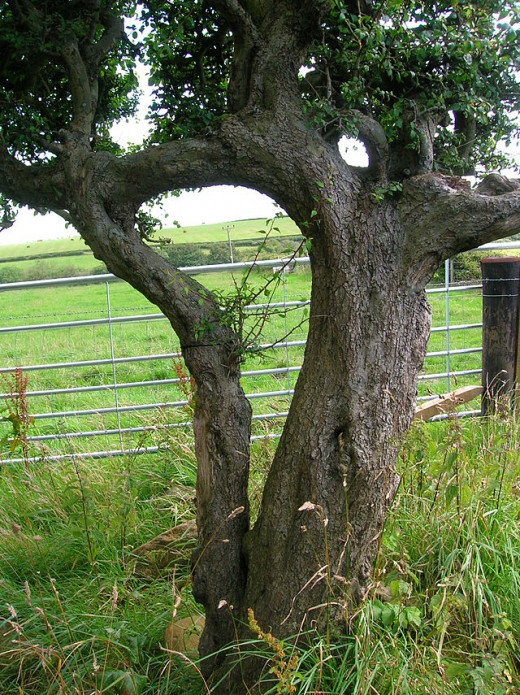 The flowers that appear in late March {earlier in the more southern counties} consist of five petals.five sepals,and a single carpel forming the ovary and distinct yellow-orange tipped stamens.The petals are milky white and open very wide,so that there are spaces left between them.This sometimes gives them a raggy appearance and helps to distinguish them from many other flowers of a similar constitution. They may be arranged singly or in clusters, but each has invariably its own separate stalk,which connects it to the twig or spine.

The stamens vary in number but are always arranged in multiples of five. The flowers are hermaphrodite {both sexes represented in one flower. The flowers are a vital pollen source for early flying bees and other insects. 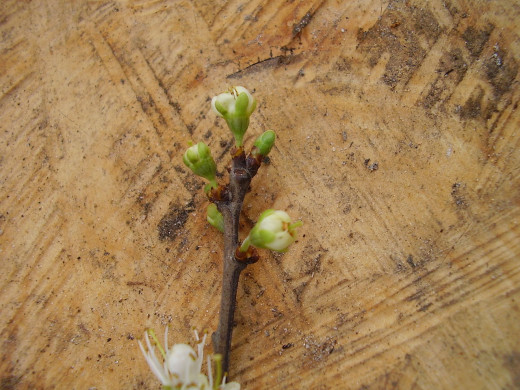 The leaves are arranged along the shoots in a spiral order. The leaves vary in size from three quarters to one and a half inches long, and at their widest point from half an inch to three quarters of an inch in breadth. They taper towards the base and are finely toothed. Their colour at first are of a delicate pale green but has the season progresses become duller.On the underside they have a dull matt surface. the midrib is prominent.The leaf stalk is also of a pale green or reddish green on the upper surface and red on the lower surface.

On the new shoots and suckers the leaves tend to be more round in shape and flat with the angle between the leaf stalk and the twig somewhat acute,so that they point in an upward direction.

The beautiful flowers of the blackthorn 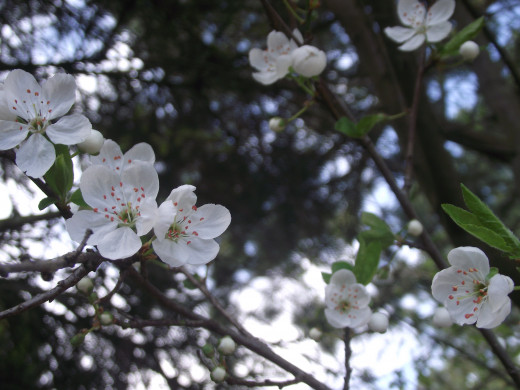 Buds of the blackthorn 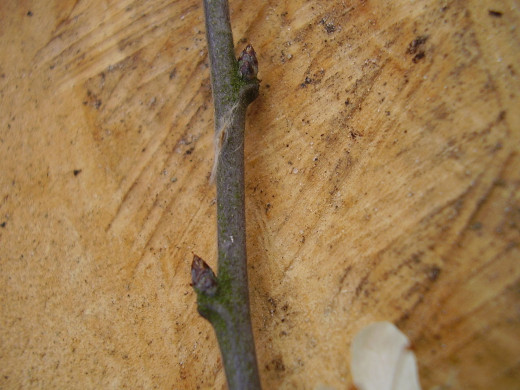 The sloes succeed the flowers and often form dense clusters at the axils of the twigs. At first they are a dull green colour but by the end of September display a black-purplish bloom and should the bloom be rubbed away by the movement of the branches the fruits show a purple-black or green-red surface, according to if they are or not exposed to the sun.Cherries have the same flower and fruit structures though thy differ considerably in their outward appearance.

It is from these fruits that the famous sloe gin is produced a powerful beverage made by country people. 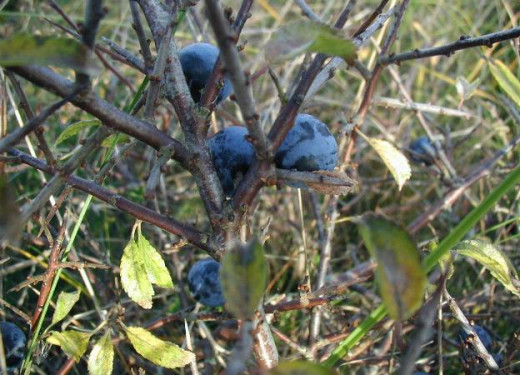 Each year the new shoots,long and straight are produced.They are downy when young and form straight side shoots which become the thorns. The wild plum and the Bullace tree are thought to be varieties of the Sloe.However, they can be readily distinguished by the leaves and flowers appearing at the same time. The leaves of the former two are also different being downy and the twigs are devoid of spines or thorns and the flowers and fruits are larger many cultivated forms are available to the gardener.

Fruits of the bullace are larger than those of the blackthorn 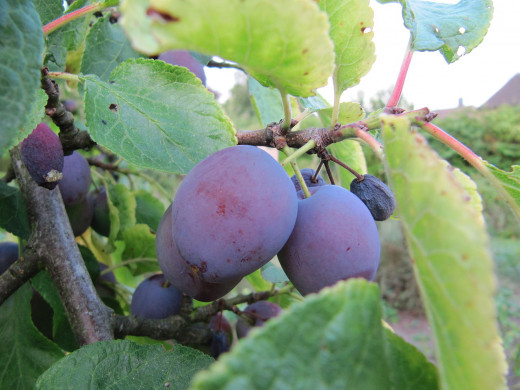 Bullace domestica subspecies insititia, is a a variety of wild plum which bears edible fruit which may be yellow or green or blue purple in colour and ripens up to six weeks later in the year than blackthorn fruits. though smaller than most damsons, they are however, much larger than the closely related sloes of the blackthorn.

It is thought that the origin of the tree derived through hybridization between the blackthorn and the cherry plum, Prunus cerasifera. other botanist believe that the bullace was developed {by selection} overtime

Prunus insititia is still occasionally regarded as a separate native species. it is the black bullace that is regarded as the 'wild bullace' of the woods and hedgerows. The species extends beyond Europe to the Himalayas and the shores of the Caspian, through Armenia to north Africa.

The bullace becomes a tall shrub/small tree about fifteen feet high. It resembles the blackthorn but is less spiny and has straight ,not crooked branches, covered by brown not black bark, only a few of the older branches terminating in a spine, the younger ones are downy.

It also has larger leaves than the blackthorn,downy underneath,alternate,finely toothed,on short,downy stalks. the flowers are white like those of the blackthorn, but larger and with broader petals borne on the naked branches but expand just as the leaves begin to unfurl. The globular fleshy fruit has generally a black skin colour with a bluish bloom

The images on this page may be reused . However, the name of the relevant author must be attributed along with any accompanying license. 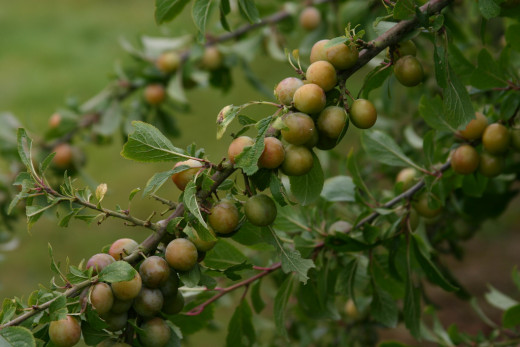