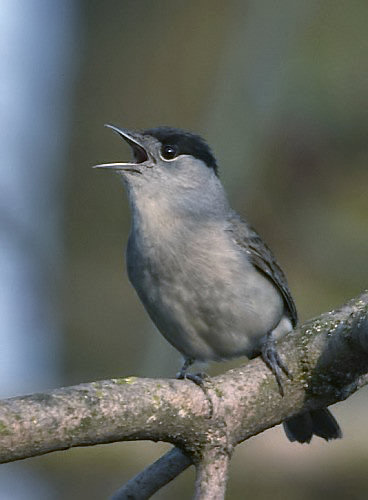 Here we review the Blackcap, Sylvia atricapilla. They belong to the order of birds known as the Passeriformes and are placed in the family Sylviidae The specific name of atricapilla derives from ater meaning black and capillus meaning hair {of the head} both this and its common name refer to the birds black crown.

It breeds in Europe , and Western Asia and winters south to tropical Africa. It frequents Forests and open woodland along with towns and villages. Although regarded as a summer visitor, in the UK, it may now be found all year round especially in the south, but the winter birds are thought to be mostly visitors from central Europe rather than British breeders that have remained here. According to the results of the Garden Bird watch Survey,{ UK}, the late start to the spring of 2013 saw the largest number of Blackcap in at least a decade. {source BTO}

In this article we review the lifestyle and breeding habits of this handsome little warbler whose name in Gaelic is Ceann-dubh, Welsh-telor Penddu and in Irish Caipin Dubh. As always we start with a description of the subject under review.

The male bird is of a greyish brown colour with a small black crown. The female has a warmer brown plumage and brown cap, both sexes are paler beneath. they have a thin blackish bill and grey black legs.

In relation to its body size the wing length is short, the tail medium to medium long, the neck short, the bill short and the legs short to medium length. the flight is jerky and flitting, hops on the ground.

The male can be told from all other birds except from the smaller Marsh and Willow tits { both of which have black chins} by its black cap. Female and juveniles can be distinguished from other small birds by their brown cap.

Public domain courtesy of the BHL. 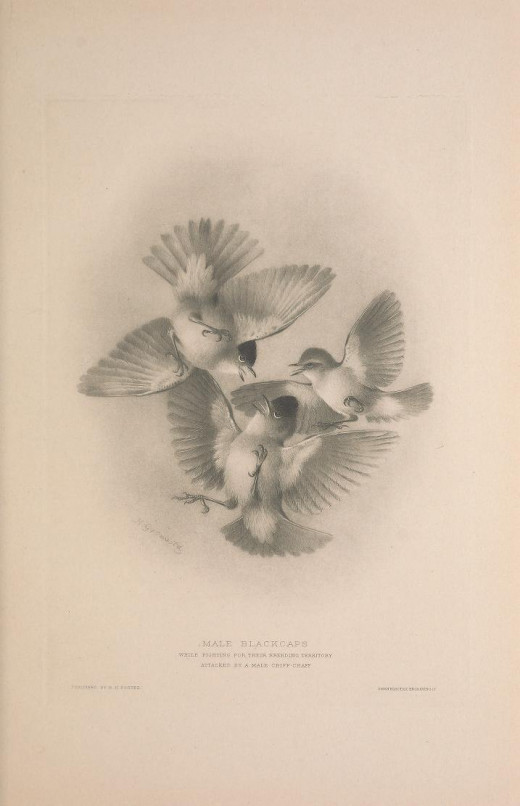 Poem to the Blackcap

" The gale brings music! and, in strains of sorrow,

Stealing along the glen, so sad, so sweet,

Some elfin harp is surely strung to sadness:

Or 'ti's the requiem chaunt of holy men,

For Knight or palmer- gone, or wailing dirge.

Of some lone minstrel, for the brave and good.

Tho, mournful is the strain, no mourner sings:

It is the vesper hymn of some sweet bird,

The while, the plaintive cadence soothes his mate"

Illustration of a male in spring. 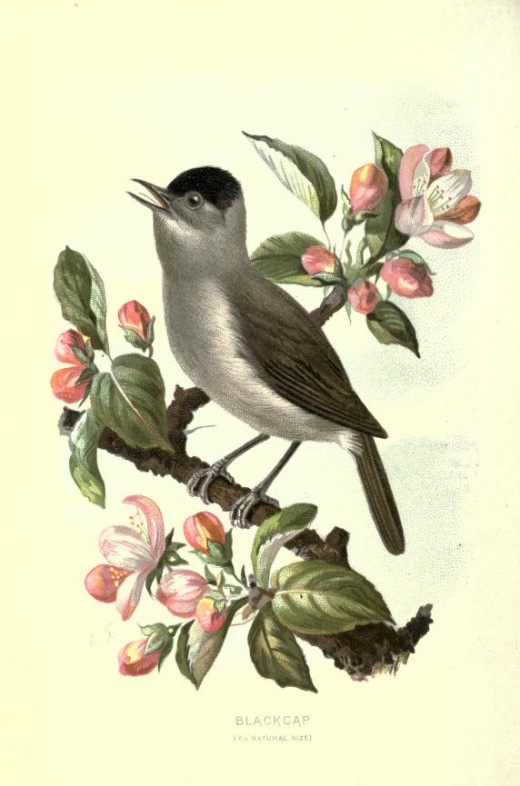 The nest is always placed low down among the  bushes and undergrowth, holly, elder, or bramble are all utilized, but many other shrubs may be chosen. The construction consists principally of dead grasses of varying lengths, and the coarser ones are employed on the outside while finer ones are chosen for the interior. The lining is mad up of horse hair or similar substances.

The female does the greater part of the building, the male sometimes helps independently, often singing whilst doing so. At other times he just follows the female as she searches for materials. the interior of the nest is shaped by the birds lying in it and turning round and round. Directly the first egg is laid, the male takes his turn at sitting on the nest, and in cold weather, especially cold mornings, the eggs are never left exposed, with one or the other birds always in attendance.

The eggs are usually four or five in number, one egg being deposited every twenty four hours. Whilst incubating is on going the birds change places frequently. The change over is undertaken by means of a low call from the female, when the heard the male leaves the nest while she takes his place. The process of incubation lasts for about 14 days. Most of the young are hatched during the first or second week in June, They are born blind and helpless.

Both parents are very attentive and see to the requirements of the demanding chicks. At this period the male is very excitable, and if another bird approaches to near the nest he immediately darts of in pursuit. When brooding however, he will not leave the nest until almost touched, then he flutters off and runs along the ground, often imitating the notes of other species.

The young grow quickly, being fed on a diet of insects and their larvae. About the fifth of being born the begin to use a very quiet call note of the species. On the sixth day or there a bouts they stretch themselves and flap their wings. By the 12 day they are ready to fledge. Even after they have left the nest they continue to be fed by the parent birds for some further days before they become independent

Lifestyle of the Blackcap

The arrival of these birds in the UK can be somewhat erratic, with the first males being solitary and scattered through the country. Sometimes they arrive as early as March at other times it may be mid April. there is generally a pause of a few days between the arrival of the first males and the main body of migrant males appear.

Wooded banks and dingles, coppices, gardens with plenty of evergreens, and woods in which the timber is open with plenty of undergrowth, are the favourite haunts of the Blackcap, provided that there are sufficient trees overgrown with common ivy close at hand, for they live on the fruit of the ivy until there is sufficient insect food available, which may two or three weeks after their arrival.

There are few more spring-like sounds than the song of the male Blackcap. The song does in fact have a peculiar cheerfulness, which alone seems to dispel winter and welcome the spring. arriving during the night the male begins to sing soon after dawn, but the energy by which the song is delivered is dependent at this early stage of the year on the weather. Cold winds do not suit him, on the other hand sunshine is not necessary, but warmth, no matter whether accompanied by damp or rain, seems essential, if he his to enjoy life to the full.

During cold mornings in April he often establishes himself on top of some high tree, and sits there quietly with intermittent singing. While below him the ground may well be white with frost. he will then fly to the nearest ivy berries and having rapidly consumed six or more, he will rest a while allowing the berries to digest, before again going in search of another quantity. if cold winds prevail he will seek out some sheltered spot and try find the warmth any weak rays of the sun will afford him.

Each male on his arrival sets up his breeding territory and if two or more males arrive on the same night, and, happened to have settled in the same territory, severe battles for territorial rights ensues. During these battles there whole demeanor is one of intense rage, their feathers are held close to the body , but their head feathers are raised. they fly at each other, and, meeting in the air, peck at each other furiously as they flutter round and round.

These battles are of an exhausting nature and it is not uncommon after each one for the birds to be observed sat on a perch with their bills open as they pant for breath. Once recovered they will dart off rapidly in to the trees. Until the females arrive the male Blackcap spends much of his time in song. he will utilize growing on a particular tree. Morning after morning he pours out his song and preens his feathers. This branch may be referred to as his headquarters within his territory.the females arrive in the middle of April as a general rule some days after the males.

By the term of courtship it is generally regarded to the period between the time the female arrives and settled in a territory of her chosen male, until the time the first egg is laid.

Towards the end of July the song decreases and by August has practically ceased. During the latter month the birds become quiet and somewhat subdued. this is normal among all species which are undergoing their moult. In the case of the Blackcap the moulting period extends from the middle of August until the end of September, but they do not all moult at the same time. Some have assumed their winter plumage by the beginning of September while others do not do so until the latter part of the month.

During the autumn they are more easily observed in Elder bushes, which they are attracted too, by the berries. Often they collect in groups to feed on the berries, for a few hours each morning. At this time of the year the demeanor is much more somber than the excitable one displayed in spring and during the breeding season.

At this time of the year they are also much more likely to be encountered in gardens where they come in search of soft fruit including blackberries, as they fatten up for their migration journey to southern Europe and tropical Africa

The images on this page may be reused , however, the name of the relevant author must be attributed along with any accompanying license.