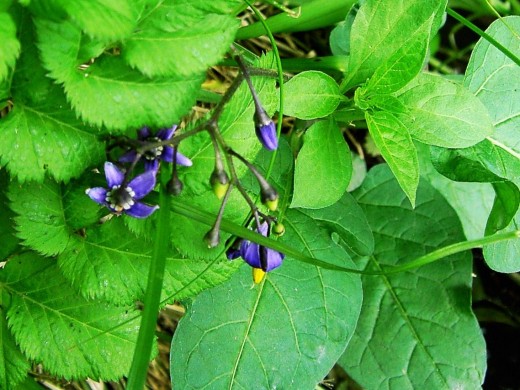 The Bittersweet, also referred to as the Woody nightshade, belongs to the Solonaceae family of plants, which contains many poisonous species, but also includes some of the main stay vegetables such as the humble potato. Indeed the flowers of these two species confirm the affinity.

Although the Bittersweet is not one of the most handsome or conspicuous plants one would meet in the course of their rambles it is still in my opinion worthy of note. There is, again in my opinion, a certain beauty in the form and colouring of the flowers, along with the various colour of the fruit as it begins its process of ripening.

The specific name of the plant dulcamara meaning 'bittersweet, alludes to the taste of the toxic berries which at first taste bitter followed by a sweet sensation. In some of the more archaic herbals it is referred to as Amaradulcis. Another common name for the plant in days gone by was Felon wood, which derived from its one time medicinal use to cure whitlows', the old name foe whitlow was felon.{ whitlow is any pussy inflammation at the tip of the fingers or toes }. The current name of Bittersweet derives from the old English name of Bytterswete. The genus name of Solanum seems to have caused some debate as to its origin-some say it is from solari meaning to comfort while others conclude that it is obviously from the Latin word solanum meaning nightshade.

In this article I review the use ,past and present, in herbal medicine, containing past observation from herbalists of days gone by. As is usual, I start the review with a description of our subject

The Bittersweet is a shrub like plant throwing out long branches that climb and straggle over hedgerows in which the plant is almost exclusively found. It is rarely if ever found standing alone, but always among more robust vegetation upon which it can get support for its weak stems. These stems may be more or less smooth in others more hairy.

The foliage is borne on the stems. The form of the foliage is subject to considerable variation, they may be egg shaped or more or less heart shaped. The upper leaves may be habard- shaped and eared. they are nearly always a dull coloured green.

The flowers are a lurid purple, with two green spots at the base of each segment and the yellow anthers are united into a pointed cone. The petals often turn back to expose even more of the anthers. They hang in clusters opposite to the leaves.

The glistening fruits, which are in the form of scarlet berries, appear on the bough after the flowers have faded. They are green to begin with gradually changing to a scarlet colour , which is more conspicuous than the purple flowers of June. They ripen in October and November.

Illustration of Bittersweet. Courtesy of the BHL Public domain. 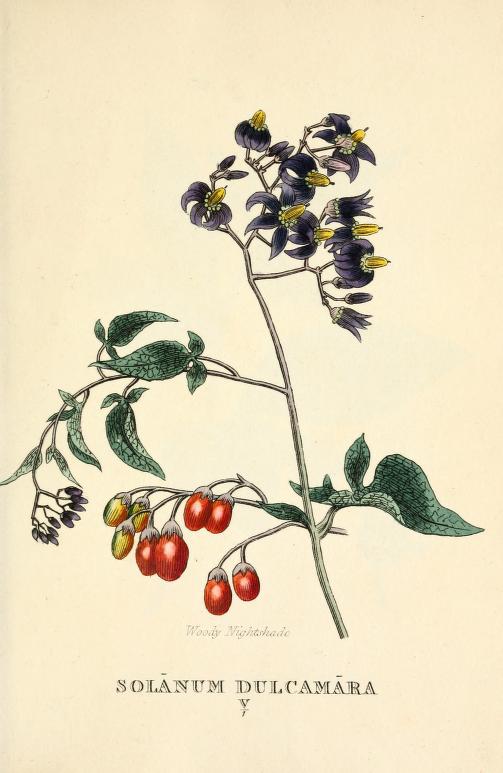 The berries which we consider to be poisonous was mentioned by Bachouse when he claimed that the people of Norfolk Island ate them, although he also observes that the " The Climate probably allies their properties"

External application of a decoction of its leaves has been employed with good effect, however because of its poisonous properties internal preparations was only administered by 'qualified persons'. The stem leaves and fruit all contain, poison

The root system of Bittersweet, when bruised diffuse a nauseous odour, and whether fresh or dried, invariably possesses the union of properties to which the plant owes its name of nightshade. The fresh leaves are said to give off a slight musky smell, but when dried have no odour at all.

Mr Guersent {1800's} stated " I think that the saccharine principle resides in the ligneous part, and the bitter principle in the cortical part of the old stems" The activity of the plant was supposed to depend on an alkaloid, discovered by Defosses, which he called Solania or Solanine, which is also found in the berries of the garden nightshade, but not in the leaves of that species.

Solanine was obtained by treating the filtered juice with ammonia, whereby a greyish precipitale was formed. This deposited collected upon a filter, washed, and treated with boiling alcohol, yeilded by evaporation the above salifiable base.

When pure, it is white and opaque, having no smell but a slightly bitter taste. It required 8,000 times its weight of hot water for solution, and it is but sparingly soluable in alcohol. It has an alkaline reaction, and with the acids forms neutral salts, its reactions on animals is to produce vomiting which was generally followed by lethargic drowsiness.

According to the British Flora Medica { 1858 } the poisonous properties are as follows--The berries of the bittersweet are looked upon with terror by the peasantry, who rank them with the shining fruit of the bryony, under the name of 'poisonous berries'. the accounts of their deleterious nature have probably been much exaggerated, for Duval, gave 60 and even a hundred berries to dogs without any appreciable results.

Berries of the plant. Green at first turning red when ripe. 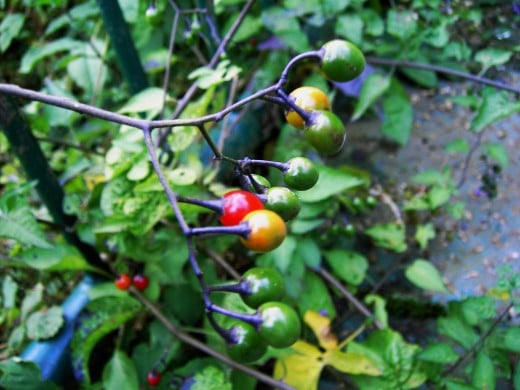 As far as medicinal purposes are concerned, herbals of days gone by convey that the ordinary effects of this plant are narcotic and diuretic. In large doses it was said to occasion nausea, vomiting, syncope, palpatations, and convulsive twitchings in various parts of the body. One herbal states " Its influence on the nutritive functions is shown by the alvine evacuations, the increase of perspiration and abundant secretion of urine. It also augments the production of mucus secretions, and in some cases facilitates expectoration"

Whatever the values of this plant may or may not have been, it was extensively used in various acute and chronic diseases. Bergius, gave from 5-10 grains of the extract twice or three times a day, to cure gout and other eminent practioner's of their time recommended it against pleurisy, asthma, jaundice and dropsy. Dr. Batement considered it to be one of the most effective remedies for leprosy under all its varieties.

The twigs {stems} were the parts used in most herbal preparations and for that purpose they were gathered in the autumn after the leaves had fallen. it was prepared in the form of a decoction. Even by the 1800's the external use of the leaves was almost forgotten except in ' rustic practices'. They were sometimes applied externally in the form of a poultice or fomentation. the leaves and stems were broken up with a little hot water or by making a strong decoction of them.

These preparations were deemed of service in all hard and painful swellings, especially those of the knee joint, or in the female breast. But also in all contusions and bruises for ' promoting the absorbtion of extravasated blood' by which means the blackness is removed.

In his book American Medicinal Plants {1887} Millspaugh, recommended that the fresh green branches, that are still pliant, and their leaves, should be gathered just as the plant id budding to blossom, and chopped and pounded into a pulp, enclosed in a piece of new linen and pressed. the juice thus expressed should, by brisk succession be mingled with an equal part by weight of alcohol. he then recommended that the mixture should be allowed to stand for at least eight days in a well-stoppered bottle in a dark cool place and filtered before using.

Millspaugh observed that the resulting liquid was a pale chestnut color, having at first a decidedly bitter, then sweet taste, and an acrid reaction. The physiological action Millspaugh observed, was he said " Somewhat narcotic, but of a short duration in this sphere. Upon the circulation the action is quite marked ,it causes venous congestion, attended with great pain, heat ,nausea and vomiting, and sudden prostration. The head droops and oscillates forth and back, the patient is giddy, the heart palpitates, the mouth becomes hot and dry and the face and ears cyanotic."

Another case note relates a case of poisoning by the berries. It appeared in the Lancet of June 28 1856 {page 175}, in which the identity of the plant seems certain and it stated that the berries of Solanum nigrum {black nightshade } whose berries are much more poisonous took no part, resulted in the death of a four year old boy.

The following symptoms were recorded. After eleven hours during which no symptoms of importance were noticed, he was attacked by vomiting, purging and convulsions, which continued through out the day, the child being insensible during the intervals. He died convulsed in about twenty four hours. The vomiting matters were of a dark green colour and of a bilious character.

The Black nightshade is a close relative and even more toxic. It is often found as a garden weed. 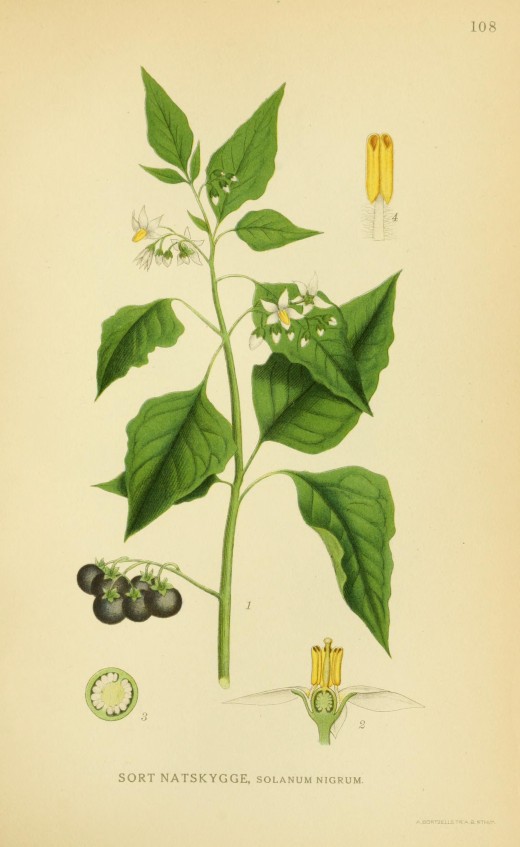 In later herbals such as ' A Modern Herbal {1931} by Mrs M. Grieves it states that the drug possesses feeble narcotic properties, with the power of increasing the secretions particularly those of the skin and kidneys. Mrs Grieves states that it is chiefly used in skin diseases, being a popular remedy for obstinate skin eruptions, scrofula and ulcers.

However, it is a plant to be aware of when foraging, the bright, ripe, red berries are very tempting, but toxic. They are better left well alone.

In homeopathy it is still used in commercial preparations to treat rheumatism, colds and skin rashes.