Bistort, past and present medicinal uses. 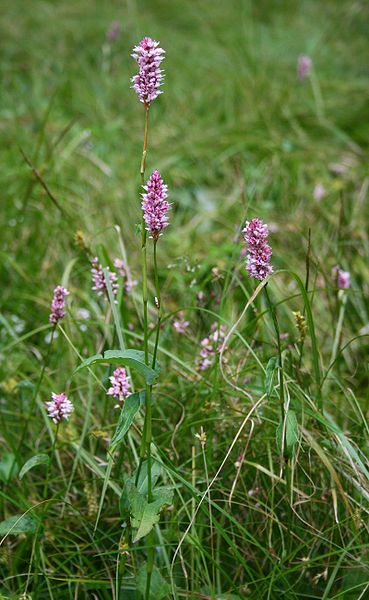 Bistort -Persicaria bistorta , Formerly referred to as Polygonum bistorta belongs to the Order of Plants known as the Caryophyllales and the family Polygonaceae and placed in the genus Persciaria.
The Latin name of Bistorta and the common name of bistort allude to the twisted appearance of the roots as does the country title of snakeweed. It derives from bis=twice + tortus=twisted. The old genus name Polygonum and the family name of Polygonaceae derives from two Greek words polys meaning many + gony =a knee and alludes to the many joints on the stems of this family of plants.
Here we look at this species and its past and present medicinal uses. As always we will commence with a description of the subject under review.

Illustration of bistort and its components. 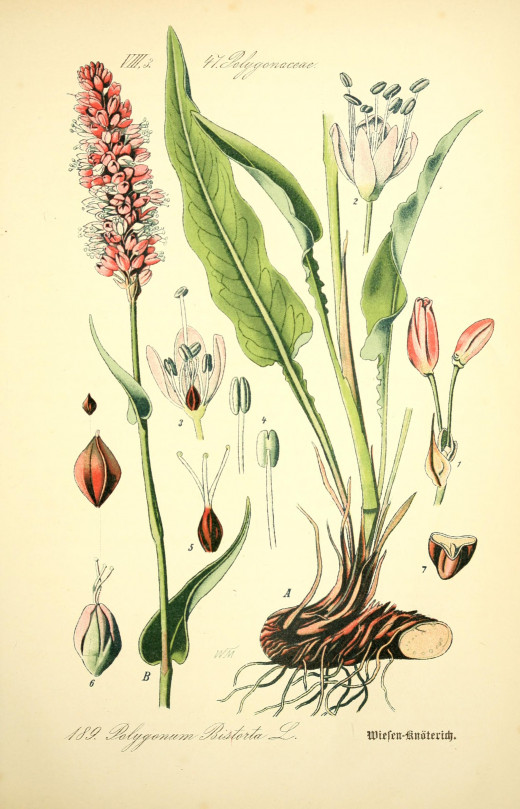 The root of this species is tuberous and twisted,being somewhat S-shaped. It is dark brown externally and whitish within. It is about the thickness of a finger, and furnished with numerous slender fibres.
The stem is simple and erect, cylindrical, knotted at the joints,striated, smooth and attaining the height of 18 inches { 30-50 cm} .The leaves which spring directly from the upper side of the root system are oval with heart shaped bases of a bluish green colour, on the upper sides and ash grey,often tinged with purple beneath. Both the leaf stalks and the leaf blades are about six inches {15 cm } long. The upper part of the leaf stalk is winged. Those of the stem are all smaller, clasping and almost stalkless, each as long membranous stipule.
The flowers are arranged in a terminal, dense,cylindrical spike. Each tiny individual flower is supported on a very short stalk, with shining,serrate membranous bractea {very small bracts} at the base. each flesh-pinkish flower consists of five coloured sepals, eight stamens and an ovary of two or three styles. The flowers are grouped in two's, one flower complete, the other with normal stamens but only a rudimentary ovary. The styles of this complete flower do not mature and become receptive of pollen from visiting insects, till their stamens have shed their pollen and fallen, hence cross-fertilization is ensured.
The fruit {seed capsule} is a triangular pointed nut containing a single seed and surrounded by a persistent calyx. Birds often feed on the seeds , which were once utilized to feed and fatten poultry.
The plants flThere are similar plants such as 'Redshank' Persicaria maculosa, along with the Amphibious bistort, the Alpine bistort and the American bistort, Bistortia bistortoides or Polygonum bistortoides.

Growing in a meadow in Germany. 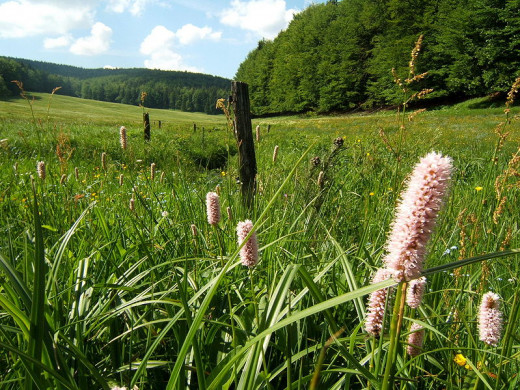 Most of the plant seems to have been applied to useful purposes. It is said that cattle are generally fond of it, though horses were said to refuse it. And as previously mentioned the seeds are eaten {and fed} to birds and poultry.

The young shoots were formerly eaten in herb puddings and boiled as greens in the north of England, where the plant was formerly referred to as the Easter Giant and patience Dock. it was the root ,however, that was considered to be the more valuable part of the plant, and it was claimed that it possed a great astingency. it has been found to contain a large proportion of tannin and gallic acid;Oxalic acid was also detected in it by Scheele.

After repeated washing's, the root of Bistort looses its styptic qualities, and affords a considerable quantity of a substance which closely resembles starch, which in many northern countries , especially Russia, was mixed with wheaten flour and made into bread.

By the late 1800's the plant had fallen into undeserved neglect. Dr Cullen observed " both by its sensible qualities, and by the colour it gives with green vitriol, and by the extracts it affords, Bistort seems to be one of our strongest of our vegetable astringents. As such we have frequently employed it , and, particularly in intermediate fevers, in the quantity of three drachm's daily. { Materia Medica vol ii page 40}.

The powdered root in doses of a drachm,has been given in cases of hemorrhage, diarrhoea and chronic dysentry. Geoffroy { Maturia Medica, vol iii page 195} recommends it in incontinence of urine, excessive menustration, spitting of blood and bilious vomitings.

A decoction made from one ounce of the root boiled in two pints of water was regarded as being an 'excellent gargle for scorbutic gums and ulcerated sore throats'. The tannin it contains was found by M.Haemstaedt, of Berlin, to be 'as strong as that of oak bark, the root might well be employed in the preparation of leather'.Both the roots and the leaves were believed by older herbalists to have " a powerful faculty to resist all poison", and to be very useful in the plague, and other forms of pestilence. A decoction of the leaves, or the powdered root was considered an inward and outward remedy for wounds. Spencer writes--

" Then whether it divine tobacco were,

She found and brought it to her patient deare

Who all this while lay bleeding out his hart-blood neare"

The above information is for historical interest only and not meant as a guide for self medication. 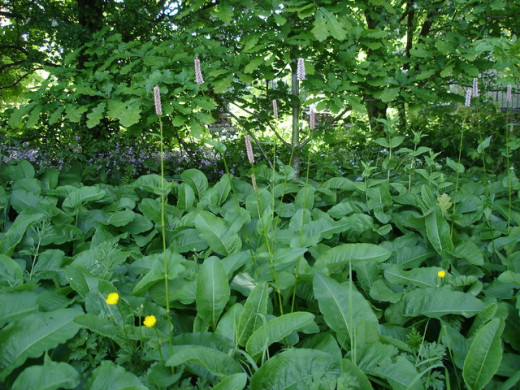 American bistort. Used as a food plant by some North American Indians. 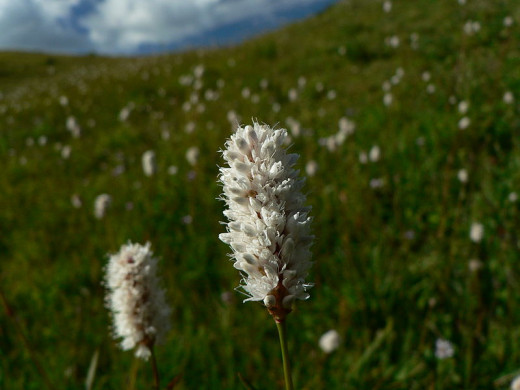 Modern clinical trials have found that extracts of Bistort have antioxidant properties as well as antipyretic {reducing fevers} Bistort is an anti-inflammatory and astringent, as such is well employed against diarrhea and in addition to mucus colitis. The mucilage also comforts the digestive tract. It has also been employed by modern herbalists against nasal catarrh.

The herb in powder form is held in esteem as an agent for wounds to stop bleeding. herbalists also recommend, being astringent, in cases of bed-wetting. An home made infusion to use as a gargle for mouth and throat infections or as a poultice for infected wounds can be produced by using two teaspoonfuls of the herb in 250 ml of luke warm water. Leave to stand for five hours before using.

It is wise to pint out that Bistort is very tolerable to most people,however,taking the herb in excessive doses { often the prescribed doses over a long period} is not advisable as the herb possesses high amounts of tannin {20%} and prolonged use {2-3 weeks consecutively} of any herb that possesses astringent properties too, is not recommended. Over use , it is thought, can also cause a probable toxicity to the liver. Pregnant women should consult a doctor before using Bistort.

The plant known as the American Bistort ,Polygonum bistortoides is a significant food source utilized by American native Indians inhabiting the mountains on the western region of the continent.

If you are using a herb for the first time try a little amount to test your body tolerance.

Bistort and the garden

It will grow in sun or part shade. It is recommended that they are grown in a south facing, east facing or west facing aspect. They may be exposed or sheltered positions. The soil on whatever the situation needs to be a moist soil. The type of soil is not an important factor. They will thrive on banks, slopes, coastal cottage or informal gardens, flower borders and in wild flower meadows.

The plants are relatively maintenance free and only need dead heading. they can be propagated by division in spring and autumn. These plants are usually pest free. They flower in summer and autumn. They make take up to five years to attain their maximum height. They are classed as being very hardy and have achieved the Award of Garden Merit {AGM} by the Royal Horticultural Society.

Other Bistorts including the common Bistort are used as ornamental's in moist parts of a rockery or shady borders. When grown in bold masses, they produce an attractive display.

It was once used in Manchester {north west England}, in the early 1800's to prepare the leaves in various ways for their daily meal. It is apparently the herb recommended by M.Sayer, in her very popular book on cookery, as sweet dock, and as forming an excellent dish.

The young leaves are somewhat chewy but they may be eaten raw, although they are best when cooked and eaten as one would prepare and eat spinach.The leaves contain Vitamin's A and C and were once eaten along with Scurvy grass for these vitamins.

An herb pudding was once commonly eaten in Cumbria { north west England} where the plant thrives in the moist meadows of that county. It was prepared in May when other green vegetables were scarce. The main constituents were Bistort shoots and nettles and the younger and fresher they were the better the product. I came across this old recipe for the herb pudding.

Allow about one and a half pounds of Bistort and one pound of nettles , a few leaves of black current and yellow dock may be added and a sprig of parsley. Wash thoroughly making the last wash with salt water, then chop them fairly fine. Place them in a bowl and mix with about a tea cup full of barley {washed and soaked}, half a cup of oat meal, and salt and pepper to flavour..

Boil the whole in a bag for about two and a half hours to allow the barley to be thoroughly cooked. The bag should be tied firmly, for while the greens shrink-the barley swells. Turn out into a very hot bowl and add a lump of butter and beaten egg. The heat of the turned out pudding is sufficient to cook the egg. 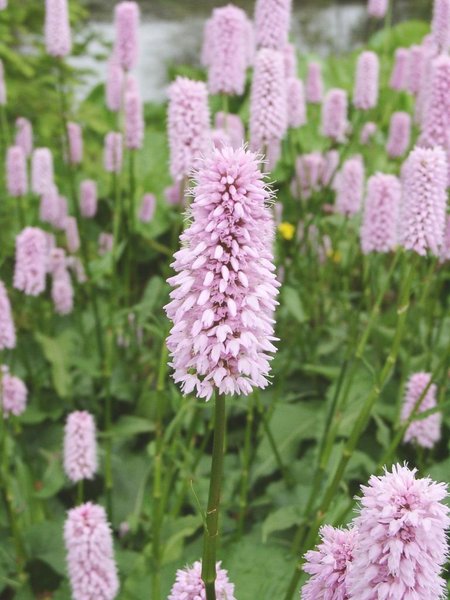 The images on this page may be reused. However, the name of the relevant author must be attributed along with any acompanying license.