This series of articles takes a look at the birds that occur in certain genera. The species in this series take us to all parts of the world. The genus Amandava,contains just three species which belong to the Estilidiae family and are referred to as the Estrilid finches. They occur in Africa and southern Asia. We commence this review with the Red Avadavat. 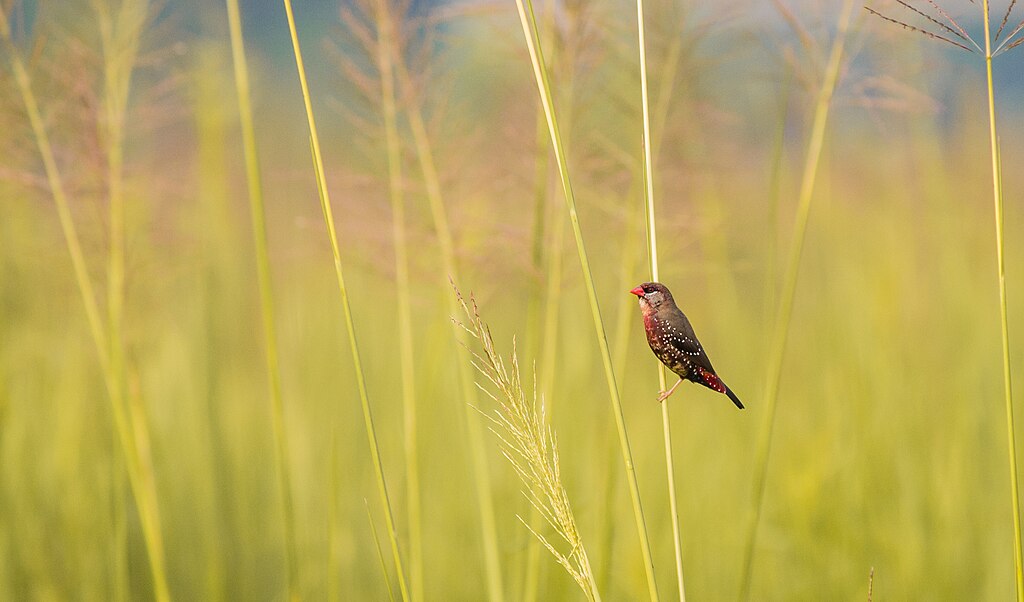 The Red avadvat , is also referred to as the Red munia, or Strawberry Finch,and is a sparrow sized bird that inhabits open fields and the grasslands of tropical Asia. It breeds on the Indian sub-continent in the Monsoon season.The species name and the common name derive from the city of Ahmedabad in Gujarat,India. It was from here that the birds were exported into the pet trade in former times.

This species is easily identified in the breeding season when the male sports a red bill,and with the exception of the black eye stripe the head and most of the upper parts are also red. The breast is red but the lower of the belly is black. The wings are reddish brown adorned with white spots. The rump is red. The lower part of the distinctive rounded,red tail is black.

Outside the breeding season the male is a much duller colour but retains the red rump. The bill turns blackish. The female is much is much duller with less white spotting on the feathers.

They were once placed in the genus Estrilda but have since been moved to their current genus Amandava. They are generally found on level plains where there is tall vegetation, grasses, and crops, often close to water, or in Paddy fields. When excited or alarmed the Estrilidae characteristically show vigorous movements of the tail accompanied by distinctive call notes.

Breeding Behaviour of the Red Avadavat

The breeding season commences with the male in all his breeding finery,holding a piece of straw  or a feather in his beak whilst bobbing up and down ,he may well sing and hop between the bows. Once a female is attracted to his courtship display, they bond,mating takes place. This may occur between January and April but varies within the region of their range. It usually coincides with the second half of the rainy season and into the following dry season.

When the task of nest building, which consists of grass and twigs lined with soft feathers, is completed the female will deposit four to six eggs. The nest is  usually located close to the ground. The ggs are incubated by both parents during the day with the female taking over at night. The incubation period lasts from eleven to fourteen days. The resulting chicks are fed by both parents and are ready to fledge  in a further twenty days or so.

Outside the breeding season.

Outside the breeding season the species tend to form large flocks sometimes as many as a hundred birds per flock. The Red avadavat is capable of perching upright between two vertical stems or twigs, it has an amazing grip with its feet  and the ability to extend its legs in opposite directions.

They feed on insects ,seeds, grains and nuts,they are primarily ground feeders. In common with other seed eaters they help in the dispersal of seeds. There are no current conservation concerns.

The Green Avadavat, sometimes referred to as the Green Munia, is allocated the scientific name of Amandava formosa. They are endemic to the Indian sub-continent and were once regularly kept in captivity The trait of keeping them in captivity caused this species to become Vulnerable due to over collecting.

This handsome little finch is about four inches long {10 cm}. They are primarily green above and yellow below. They have black and white 'zebra' stripes on the flanks. They have red bills the chin is pale yellow as is the lower chest which becomes brighter yellow on the belly and vent. The tail is black and rounded with broad feathers. The legs are a pale flesh colour sometimes browner. Both sexes are similar but the female tends to be duller than the male.

It is a species of dry and scrub regions,and also agricultural land near to water. The largest popualations seem to be in central and north western India,

The main breeding season for this species is between October and January,but records reveal that most nests with eggs have been found in July. The nest is made from grasses and is domed-shaped , with an entrance at the side. The female will deposit four to six eggs.

As previously mentioned they were once legally  trapped and captured. {easily achieved by using decoy birds and bait}, and now illegal trapping continues in some regions. They are known as Green Waxbills in the bird trade. Due to this fact they are now classed as Vulnerable by the IUCN.

The final species in this genus is the Orange breasted waxbill, also referred to as the Zebra Waxbill. It is a bird just under four inches long {9 cm }. This bird too, sports a red bill,the iris is a reddish-brown colour. The greenish yellow chin and throat,extend down to the orange breast. The crown is green and in the case of the male there is a reddish-orange eye brow. The male also has a red rump and dark bars on the whitish-green flanks. The rest of the plumage is a dark olive-green. The female is generally duller and lacks the red rump.

It is a species of grassland and Savannah , south of the Sahara desert in Africa. However, it has been introduced into other countries. Its diet consists of seeds or other plant material supplemented by insects.

The nest of this species is oval shaped,made from grass and often they utilize the old nests of the Red-collared Widow Bird. The clutch consists of four to six eggs. The incubation and fledging is similar to other Amanda species.

Associated pages. Click on the relevant content banner at the top of the page and scroll down.

Birds of the world-1 larks,featuring the Hoopoe larks.

Birds via Links banner. Click on the links banner at the top of the page and scroll down to the relevant box. Click ,this is a direct link to the article.

Birds via search bar. Click on the relevant content banner at the top of this page and scroll down to relevant shortened address. Type in your search bar . This is a direct link to the article.