King parrots of the genus Alisterus

In this series 'Birds of the World' we look at the species which occur in particular genera. The species in these genera will take us all over the globe. Here we review the Parrot species in the genus Alisterus. The parrots of the genus Alisterus are referred to as the King Parrots,and includes three species belonging to the family Psittaculidae within the order of birds known as  the Psittaciformes.

The Australian King Parrot, is a species endemic to eastern Australia,where it may be encountered in humid and heavily forested upland regions,including those with Eucalyptus wooded areas adjacent to sub-tropical and temperate rain-forests,where they forage on fruits and seeds gathered from trees or those that have fallen to the ground.

This species measures about seventeen inches { 43 cm } long which includes the broad and long tail.  The adult male has a red head,breast and red on the lower underparts. Between the red on the head and the green back there is a blue band. The wings are green and on each wing there is a pale green shoulder band, the tail is green and the rump is blue.

The male also has a reddish-orange upper mandible with a black tip, a black lower mandible with an orange base and the iris is yellow. The female differs by having a green head and breast, a grey bill and the pale shoulder band is either small or lacking altogether.

They are usually encountered in small family groups or in pairs.

Pair  of Australian King Parrots, the female on the left.

The female will lay her eggs  on a foundation of wood at the bottom of a deep hollow cavity in the trunk of a tree. The entrance may be high in the tree but the eggs and resulting chicks will often be located near the ground inside the trunk.

Five eggs usually form the clutch,which are incubated for a period of about twenty days. The chicks will remain in the nest for a further fifteen to twenty days.

The call of this species is a high pitched whistle. During flight it makes a rolling 'carr-ack' call.  Although they have little or no talking ability they have been kept as cage/aviary birds in Australia. However, they are known to bond quite quickly with humans,and some have reached the age of twenty five years in captivity. They are not a species of conservation concern.

The Papuan King Parrot, Alisterus chloropterus, is a species found in west Papua and Papua New Guinea, in the tropical ans sub-tropical lowland forests and moist mountainous forests and there are three sub-species recognized. It is a bird of about fourteen inches { 36 cm } long which includes the broad, long tail. The male has a red head and neck, redder under parts a blue back and rump and green wings,each having a broad band of pale green. The iris is orange and the legs are dark grey.

These species all feed quietly in dense forest generally in the smaller trees or the lower branches of the larger trees and often go unnoticed. They forage on berries,fruit and seed primarily, it is thought this diet is supplemented by some insects. There are no current conservation concerns. 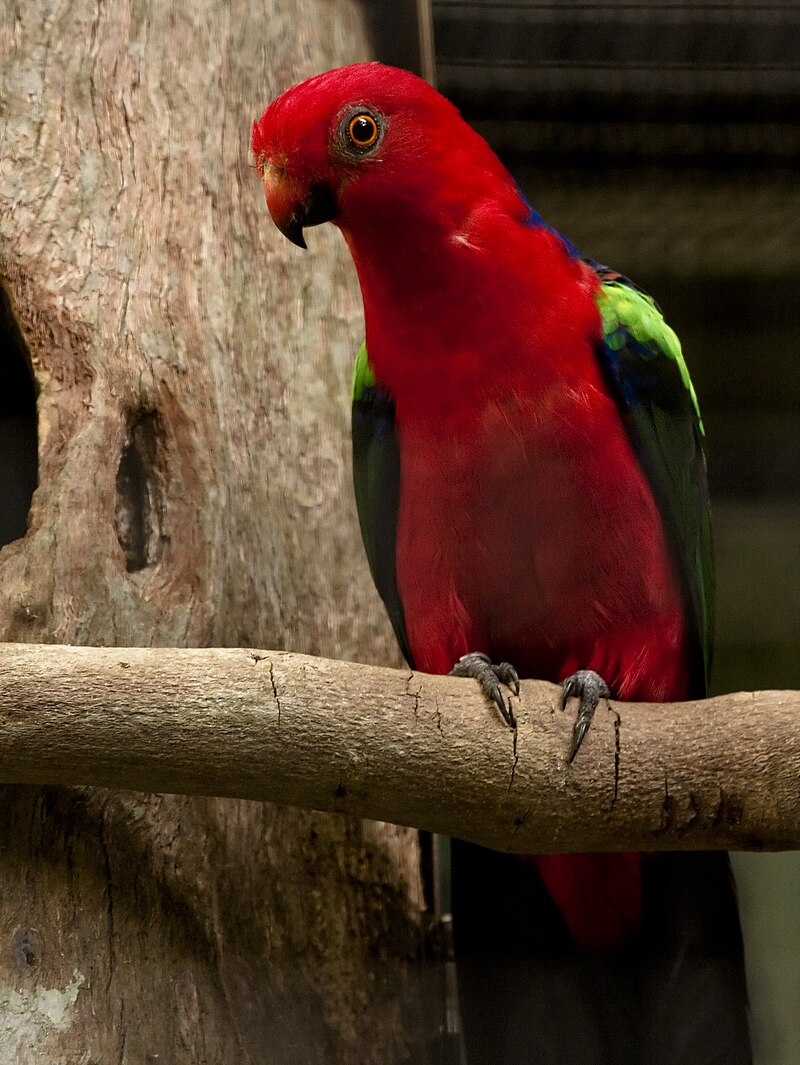 The Moluccan King parrot is sometimes referred to as the Ambon King Parrot or the Amboina King parrot, and it is a species endemic to the Peleny island, Maluka and west Papua in Indonesia,however,it is found on numerous other islands than Ambon. There are six sub-species recognized.

The adult is about fourteen inches long and sports a red head,red breast and red under parts. The outer wings are a dull green colour.{ with the exception of the sub-species A.a hypophonius} which are blue. The mantle lesser wing coverts and tail coverts are dark purple-blue, the tail is a darker blackish blue. the legs are dark grey. The lower mandible is of an orange-red colour with a blackish tip.  The iris is orange. In this species the plumage of both sexes are similar.

They are encountered either alone, in pairs, or on occasion in small groups. While foraging or perching they are quiet and inconspicuous. In flight,however, they become much more vocal. They forage of fruits, berries, seeds and buds.

BREEDING---Breeding for this species commences in February or March,but there is little on record about their breeding activity in the wild, other than they are known to nest in hollow trees. In captivity they generally lay two eggs which are incubated for a period of about nineteen days and the resulting chicks are ready to fledge in a further nine weeks or so.

There are no current conservation concerns, they are rated as being of Least Concern by the IUCN , however it is becoming uncommon duen to habitat loss and to the Parrot trade. In some regions they are locally common. They are regularly bred in captivity in many countries.

Associated pages. Click on the relevant content banner at the top of the page and scroll down.

Birds of the World-1 Larks featuring the Hoopoe Larks. With Images.

Birds via Links Banner. Click on the Links banner above and scroll down to relevant box . Click this is a direct link to the Articles.

Birds via your search bar. Click on the relevant content banner above . Scroll down to the article you wish to view. Type in the shortened address into your search bar. This is a direct link to the required article.

All other birds that appear on this site are grouped together in the content banners above. Click and scroll down.