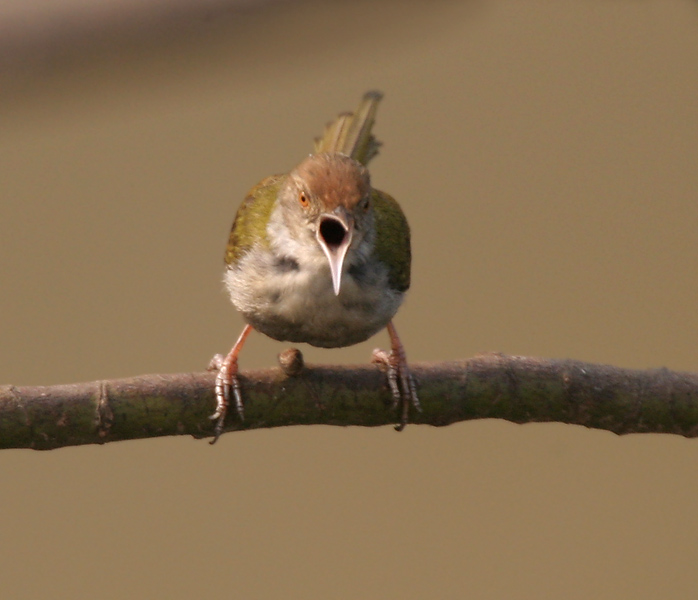 Birds of the world-15  Tailor birds.

In this series of articles we review the birds that occur in a particular genera. These species occur all over the world. Here we review the Tailor birds small passerine birds, most of which belong to the genus Orthotomus and they are often placed in the 'old world' warbler family Sylviidae, however, some authorities suggest they are more likely to belong to the family Cicticolidae.

They occur in the 'old world' tropics principally in Asia. They have acquired their common name from the way their nests are constructed. The edges of a large leaf  are pierced and sewn together with plant fibre or spiders web, to form a cradle in which the actual grass nest is placed. The genus name of  Orthotomus,  indicates 'straight cutting'. We commence our review of these species with the Common Tailor Bird. 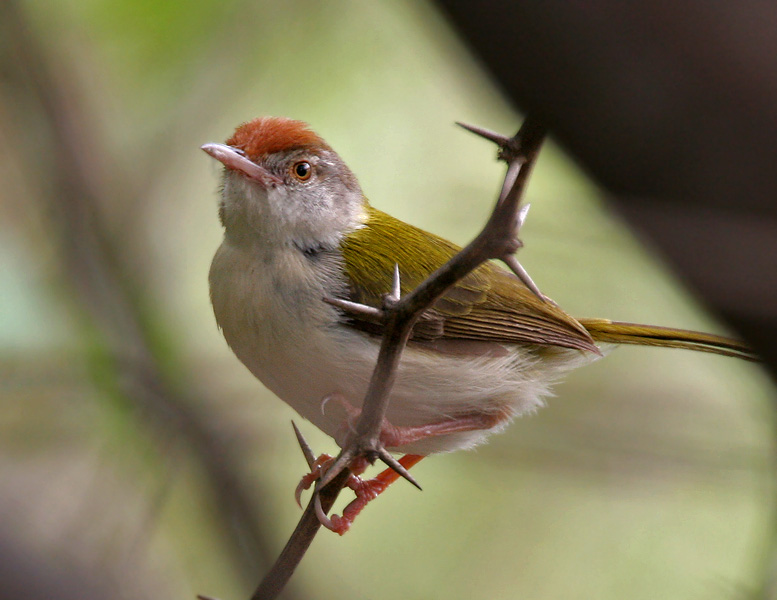 This little song bird is found across tropical Asia and is a common resident in urban gardens. Although they are common they are secretive and shy,keeping themselves well concealed in dense vegetation, and it is their song that gives this wren- like birds presence away.

They are distinctive birds with a long upright tail, greenish above with a rust-coloured forehead and crown.

Frank Finn an astute observer of birds writes in his book 'Birds of Calcutta' published in 1917, about this species.

" So when the spirit moves him he shouts 'to-whee, to-whee-to-whee', with such vigour that he gets black at the side of the neck, having a cunningly concealed patch of that colour there which only shows when he is calling. Mr Durzee, no doubt, admires both hue and cry for, unlike most of our warblers at home { England}, Durzee goes in for conspicuous superiority to his mate,at any rate, in the breeding season, for then he alone sports a tail about twice the usual length and elegantly tapered off"

" Except for this the Tailor bird is in build very like our English wren, and were it brown, instead of green above and white below, might pass for one to a hasty observer,especially in habits it is very similar. It is generally solitary,and equally lively on its legs,when hopping on bush or lawn, and weak on the wing when it trusts itself to flight. Like Jenny wren, too, our sartorial artist is insectivorous, and will take insects of good size, though he relies on his bill alone to manipulate them. 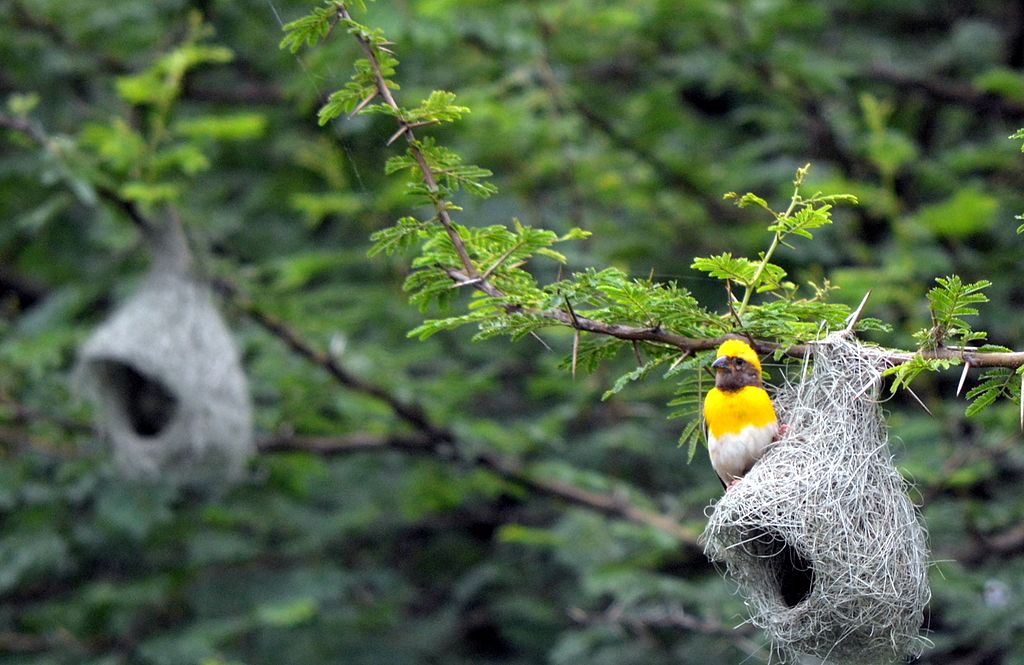 Mr Finn goes on to state, " This makes it even more remarkable, that he is able to build the wonderful nest which gives him his name and reputation. A bird which puts its foot to a thing,as the even more clever Weaver-bird does, has a great advantage over one which has but one instrument to work with.

"But probably both of the Tailors work at their wonderful structure, which is simply a big living leaf,or several,actually sewn together into a rough bag for the reception of the inner nest,with silk or fibre somehow procured by the bird, passed through holes bored into the leaves by its slender bill ,and finished off at the end with what is said to be a knot."

" The nests vary very much in construction as far as the details of tailoring is concerned;there may be ,ere implied, one leaf  or many pressed into service,and the thread may be of cobweb,cocoon silk, vegetable fibre or real sewing thread pilfered from a verandah,for the tailor bird is one of the most familiar of our birds,and is to be seen even in town,tamely hopping about pot plants a few feet from a room"

" Nevertheless, though broods have been brought up  in the Museum compound, I have never seen a nest in situ,and it is naturally not easy to find.There is a good specimen of a single-leaf nest in the Museum for anyone to see who has not met with an actual specimen; but the tailor bird's reputation is a century old in Europe,and many people must have seen pictures giving more or less of an idea of its abode."

" The young birds are cradled for the most part in cotton-wool, of which the inner nest is composed,and when they come into the world are charmingly tame little things,with a very strong likeness to their parents,except that the chestnut cap which marks the old birds is not so bright in the young."

The eggs according to Mr Hume, from whom I take my details about the nests,are most remarkably variable,for although always spotted with reddish brown,they may either have a white,or a bluish-green ground colour. But these two types do not occur in the same nest, it is very probable that the disposition to produce the eggs of one or other colour 'runs in the family'"

" There are only three to four   in the clutch,so that the Derzea has not to work so hard for her family as the Jenny wren,who is wont to resemble the traditional Old lady who lived in a shoe in the exuberance of her family.  Presumably the difference in two so similar birds is that the hanging cradle will not accomodate safely more than a very limited number of infants,while the Wrens nest in a hedge can be packed with impunity. Besides, the bitter struggle for existence in a cold climate requires a considerable prolificacy to keep a small weak species going against many risks"

The incubation period is about twelve days both male and female feed the young. The mortality rate among the young is high due to predators such as rodents,cats,Crow-Pheasants and lizards. Those that do survive will fledge in a further fourteen days or so.

Courtesy of NatureAt Your Backyard  CC BY 2.0 Generic License. Originally posted to Flickr,uploaded to commons by Itshears.

Dark necked Tailor bird. Orthotomus atrogularis, a bird found in Bangladesh, Brunei, Cambodia,India,Indonesia,Laos, Malaysia,Myanmar,Singapore,Thailand and Vietnam. It is an inhabitant of tropical or sub-tropical moist lowland forests or mangrove forest. There are no current conservation concerns.

Cambodian Tailor bird. O. chaktomuk. This species was only discovered in 2009 in Phnom Penh,it is endemic to Cambodia and the conservation status is not yet classified.

Rufous -fronted Tailor bird. O.frontalis,again endemic to the Philippines. There are no current conservation concerns.

Rufous -tailed Tailor Bird.O.sericeus, is a species found in Brunei,Indonesia,Myanmar,Malayasia ,Philippines,Singapore and Thailand. There are no current conservation concerns.

Ashy -tailed Tailor bird,O rifuceps, is found i Brunei, Indonesia,Malaysia, Myanmar, the Philippines, Singapore, Thailand and Vietnam. There are no current conservation concerns.

Olive-backed Tailor bird. O sepium, is endemic to the islands of Java and Bali in Indonesia.

Black-headed Tailor bird.  O.nigricepes, is endemic to the Philippines there are no current conservation concerns.

White-eared Tailor bird O.cinereiceps, is endemic to the Philippines there are no current conservation concerns.

Yellow-breasted Tailor bird. O samarensis, is endemic to the Philippines and is now classed as Near Threatened by the IUCN,due to habitat loss.

Two more species the Mountain Tailor bird and the Rufous-headed Tailor Bird have been moved to the genus Phyllergates with the family Cettidae.

IUCN=International Union for the Conservation of Nature.

Birds of the World-1  Larks featuring the Hoopoe Lark.

Birds via links banner. Click on the Links banner at the top of this page. Scroll down to relevant box. Click ,this is a direct link to the article. {many species including video.}

All other birds that feature on this site  are grouped together in the content banners above.