Birds of the world-13  The Black Drongo Introduction.

In this series Birds of the World we look at the species which occur in a particular genera. These bird species occur all over the world. Here in part 13, we look at the Black Drongo which belongs to the genus Dicrurus and given the species name of macrocercus. The genus is placed in the family Dicruridae within the order  Passeriformes. {perching birds}. It is commonly referred to as the 'King Crow'.

It is a small  Asian species and a common resident breeder to much of tropical southern Asia from southwest  Iran through India and Sri Lanka,east to southern China and Indonesia.

This species shows an aggressive behaviour  towards much larger birds such as crows defending its territory by dive-bombing them  and from this behaviour acquired the common name of King crow. For this reason smaller birds seek to nest in the proximity of the Black Drongo which adds another layer of security for them their nests,eggs and chicks.

Description of the Black Drongo.

This bird is entirely black with the exception of two small white spots one at each side of the base of the bill. It has a beautifully , relatively long forked tail. It was once considered to be a sub-species of the African fork-tailed Drongo. There are seven sub-species that have been recognized due to geographical range and variation in sizes. 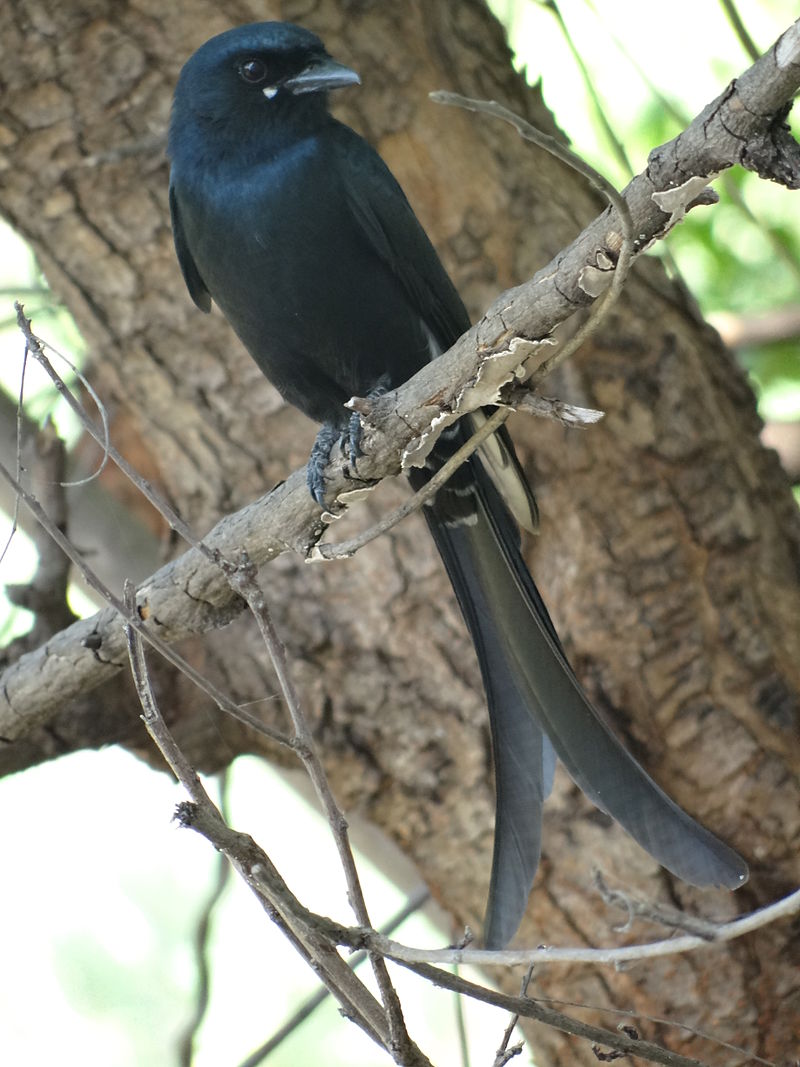 Life style and habits of the Black Drongo.

For this section I will leave to the text of the 'Birds of Calcutta' by Frank Finn published in 1917 and no longer in copywright. he writes---

" The King crow, or Drongo, as he is called in books,has a wide enough kingdom to rule over, extending from West Africa to China,and here in India, he may claim to be one of our most characteristic birds, for it would hardly be an exaggeration to say that there is one of these jet black, fork-tailed birds between every two telegraph posts for many miles of country. "

" Where there are no telegraph wires, the king crow will put up with a dead branch or a cow's back. He wants some perch that will afford a clear outlook and plenty of room for evolutions around it,and though sometimes, as on the Maidan, he will sit about on the ground, he is greviously falling from the traditions of his family in doing so, for the Drongos generally are as much given to pride of place as the Green pigeon."

" Perhaps our common Drongo owes its prosperity to waiving family pride,since even settling to catch prey is contrary  to strict Drongo etiquette, and he is constantly doing this,though he is active enough at taking insects on the wing. But he is by way of being a very versatile bird,and though he appears never take vegetable matter, he has been known to take small birds as well as insects and even to capture small fish, a feat of which no one will deem him incapable who has seen him taking his bath by plunges like a swallow, a method of performing ablutions much favoured by birds which are ready of wing."

" Armed with a very punishing beak and claws, he is a terror  to evil-doers, like the Kite and the Crow. His notes are very pleasant,and he is almost the earliest bird to tune up in the morning. The male and female are quite alike and even the young are fledged black at first, but later become mottled with white below, and it takes years for these markings to disappear altogether"

Again I rely on the writings of Frank Finn to describe the eggs and nest. " The eggs that give birth are very pretty, being Salmon coloured, spotted with red, though pure white ones are not uncommon. They are deposited in an open nest in a tree,which the parents vigorously defend.

Young birds have a yellowish -red gape and soon gain wight and size until they are about twelve days old. They become fully feathered and ready to leave the nest in about sixteen to twenty days after hatching.  The forked tails only begin to show in about three weeks"

Mr Finn goes on to conclude " there is one thing about the King crow that puzzles me considerably. Very often  I have noticed that one of the forks of the tail is much worn away,whether the right or left I have not observed, nor can I suggest an explanation, unless it is that the bird when sitting on a bough or on a wire and turning round always does so on the same side, so as to bring all the consequent friction on the same half of the tail. The King crow's tail, indeed,seems rather an unlikely member, for he does not lift it up in the air when on the ground,where it must be rather in the way, and although a forked tail is undoubtedly meant as an aid to evolution in flight, in our present subject seems unnecessarily long, and from its turned up edges looks as if it were quite as much for ornament as for use."

Birds of the world-1  Larks featuring the Hoopoe lark.

Birds via Links . Click on the Links banner at the top of the page. Scroll down to relevant box. Click, this is a direct link to the article{s}.