Birds of the world-12  Roadrunners of the genus Geococcyx

In this series, Birds of the world we review birds that occur in a particular genera. The species occur all over the world. Here we look at the Roadrunners. They belong to the genus Geococcyx and contains just two species. They belong to the sub-family of birds named Neomorphinae { The New world Ground Cuckoos that contains 11 species}, within the family Cuculidae and the Order of birds known as the Cuculiformes.

Roadrunners inhabit the deserts of  the southwestern United States,Mexico and Central America. They live in arid lowland or mountainous shrub-land  and they are widely dispersed in dry open country with scattered bush.

The first species under review is the Great Roadrunner,Geococcyx californicus.

Public domain. Courtesy of a US Army . Uploaded to Commons via Prof.Squirrel.

Roadrunners,as the common name suggests,are born to run. As they run they hold their lean frames almost parallel to the ground and their long tails act as a rudder. They are in fact large ground cuckoos with very distinctive long legs and long neck. The head has a short crest and the bill is long and slightly down-curved.

The colouring of the plumage blends in with their surroundings,being tan or brown,streaked with black on their upper parts and chest. The crown is black with some pale spotting and there is a pale patch of blue skin behind the eye. The wings are dark with some white highlights. The graduated tail is often held in an upright position. They are the largest cuckoos of the Americas from twenty two to twenty four inches long {Up to 60 cm }.

The Great Roadrunner has recently extended their range eastward into Missouri and Louisiana. They are found in the southwestern parts of the USA. 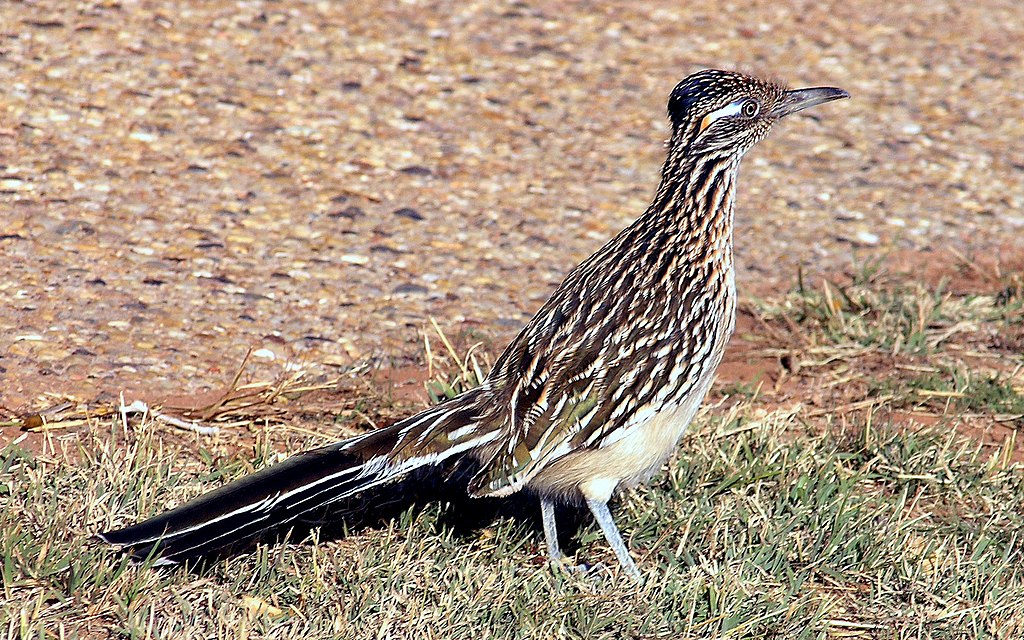 As part of the courtship ritual in spring the male will offer morsels of food to the female as an inducement to mate. This is usually accompanied by a strutting movement around her. When the mating has occurred both parents will collect sticks however, it is the female that undertakes the actual construction, which is saucer shaped,located in a small bush,small tree or in a cactus. The female will deposit  from two to twelve eggs over a period of three to five days,which results in a staggered hatching.The incubation period which lasts for around eighteen days is carried out by both parents with the male tending to incubate at night.

The resulting chicks   which are generally reduced to three or four by the time they are ready to fledge,leave the nest in a further eighteen days.They tend to remain close to their parents for a further two weeks before dispersing into the desert.

The nesting period coincides with spring when plenty of prey can be procured. However, in the Sonoran desert of Arizona, they may well breed again in August and September, after the summer rains increase the number of prey available to them.

The Roadrunner is a ground feeding birds which will take small lizards,small mammals and birds. They are exceptionally fast runners,however, their flight is weak, but occasionally they are seen perched on posts and more rarely upon telegraph wires. The great Roadrunner is capable of killing rattle snakes. They have even been known to catch Hummingbirds or Dragonflies from mid air.  it is considered that up to ten percent of  their winter diet consists of plant material due to a lack of prey at this period of the year.

Roadrunners themselves are preyed upon by species such as hawks,racoon, skunk and coyotes will all take their eggs and chicks.While adults may die during severe cold spells during the winter months. Those that do survive have an average lifespan of seven to eight years.

The Lesser Roadrunner, is another long-legged species of the Cuckoo family and resembles the previous species,but is smaller and has a significantly shorter bill. This species breeds in southeastern Mexico and north to the Sierra Madre Occidental Range,and also central America.

The diet of this bird consists of seeds,fruits, small reptiles and frogs. It will also take insects and will scavenge on roadkill.

As previously stated it is a smaller bird with no streaking on the throat or breast and below it has an off-white colouring,less bright than the previous species. The breeding and lifestyle habits are similar to that of the Great Roadrunner.

Birds of the World-1   Larks featuring the Hoopoe Lark.

Birds via Links.  Click on the links banner at the top of the page. Scroll down to the relevant box Click, this is a direct link to the article {s}

Birds via your search bar. Click on the relevant content banner at the top of the page. Scroll down to the shortened address. Click, this is a direct link to the article.

All other birds that feature on this site are grouped together in the content banners at the top of the page.