Birds of the world-11 {Cuckoos of the genus Clamator}.

Here in part 11 of this series we look at the Cuckoos of the genus Clamator that are placed in the family Cuculidae within the Order of birds Cuciliformes. The genus contains four species of brood-parasitic cuckoos that have crests and graduated tails.. These species are encountered in the warmer parts of southern Europe, Asia and Africa,south of the Sahara desert.

They are large cuckoos at least thirteen and a quarter  {33 cm} long and strikingly patterned with a black,white and brown plumage. They differ from the common cuckoo in as much as the female ,along with the resulting chick, do not evict the eggs or chicks of the host species. However, the latter can not compete for food and they often die of starvation. We commence the review of this genus with the Great spotted Cuckoo.

Clamator glandularius, the Great spotted cuckoo is a widespread summer migrant to southeast Europe and western Asia and winters in Africa. This species lays its egg in the nest of Corvids and in particular seems to prefer the nest of the Eurasian Magpie. {see content banners above for this species}.

Eggs of the Great spotted cuckoo at the Museum Wiesbaden , Germany.

Description of the Great spotted cuckoo.

This species is much larger than the common cuckoo at 14-15 inches long { 35-39 cm }and looking deceivingly larger with its broad wings and long narrow tail. They are grey-brown above with a grey cap. The pale grey feathers on the head can be raised into a small crest.The face  and upper breast are yellow the under parts white. The wings and tail have brilliant white tips which appear as spots when the wings are closed. The legs are very strong. Both sexes are similar.

These birds are insectivores, generally feeding on large caterpillars ,they will also take termites,moths,and have been known to take small lizards if the opportunity arises.

During the summer time they breed in southern and eastern Europe and northern Africa,around the Mediterranean and as far east as Iraq and Iran. During the winter months they migrate south to Africa,although small populations remain in Spain all the year round. A small population also remains in eastern Africa undertaking short migratory journeys due to local rainfalls. The birds that breed in South Africa during the summer months ,migrate to northern Africa during the winter months.

They are birds of open woodland, but also lives in dry cultivated areas in the Middle East. There are no current conservation concerns.

The Jacobin cuckoo,Clamator jacobinus, is a species that occurs in Africa and Asia. In India it is regarded as an harbinger of the Monsoon season due to the time of the birds arrival.

It is a medium sized,slim, black and white cuckoo with a distinctive crest. The wings are black but with a white wing patch that makes it easy to identify even in flight. The under parts are a buff-white colour. The long tail is black with a white tip. There is a sub-species 'serratus' which is a summer visitor to India after migration from southern Africa.

In Africa the jacobin cuckoo is widespread in the Afro-tropical Savannas, both north and south of the Equator. Its distribution in southern Africa extends from the southern Cape Province,eastward and northwards, through Kwa-Zulu Natal and Transvaal and adjacent eastern Botswana.

It is a bird of dry open Savannas, particularly Acacia, but avoids very arid country and Mesic Savannas and tends to shun forests altogether, however, it does occur in moist woodland,including Miombu woodland.

This brood parasite tends to seek out the host species Pycnonotus bulbuls, the Sombre bulbul, Andropadus impotunus,  and the Fiscal Shrike Lanius coallaris.

EGG LAYING---Egg laying has been recorded in the regions between October and April, with a peak period in November and January. In India their favoured host are Babblers of the Genus Turdoides.  The mouth of the young cuckoo chick is red with a yellow gape and like the previous species,demands, and gets most of the food brought by the host species to the detriment of their own chicks. The diet is similar to the previous species. 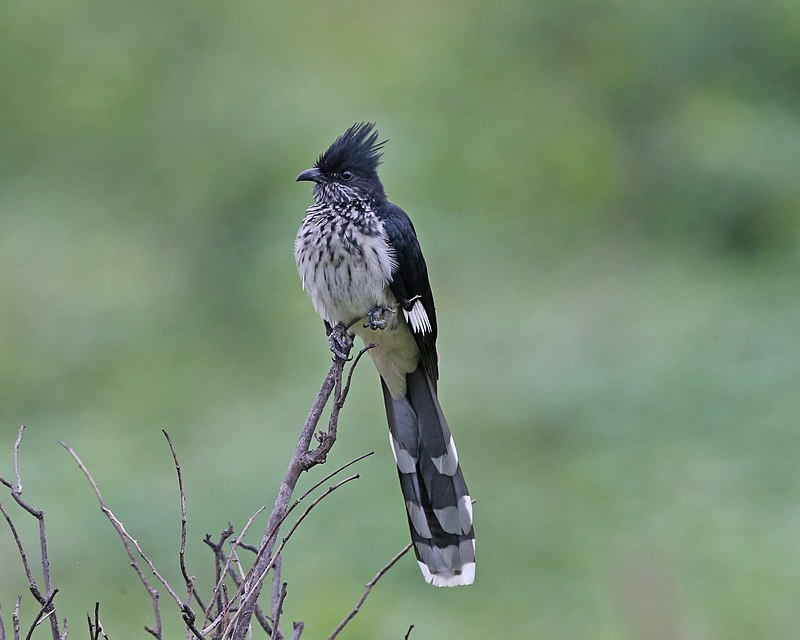 This bird is a resident species in Africa, south of the Sahara, and is named after the French explorer and Ornithologist Francois Le  Vaillant.

It is a species fifteen inches long {37-35 cm} with a long tail and heavily streaked throat and there are two colour morphs. The light morph is black above,faintly glossed bluish-or greenish. The throat streaking may extend down the sides. The tips of the wings are white. The dark morph is black except for the white primary patch and white spots on the outer tail feathers. This morph occurs rarely in coastal areas of eastern Africa.

Breeding--- This brood parasite generally prefers to utilize the nest of the host species such as Bulbuls and Babblers,with the main host in southern Africa seeming to be the Arrow-marked babbler.The breeding and rearing of the chick are as stated for the species above.

They feed on insects but will supplement  them with fruit, they forage mainly in low bushes but also on the ground.They inhabit Savanna and woodland, thickets, gardens, old farms, scrub and forest by water often in humid places. There are no current conservation concerns.

This is a species found in southeast Asia and parts of southern Asia. It is a large cuckoo forty six centimeters long.They have a black head with an erect crest and long broad-ended tail. The wings are, as the common name suggests, are a rich chestnut colour {highlighted in the image above}. there is a white nuchal collar, the mantle is black,the throat and upper breast a buff rufous colouring, the lower breast and belly whitish. The thighs are greyish and under-tail coverts blackish.

They breed in the Himalayas and southern China through southeast Asia to Myanmar. Northern populations are migratory,wintering south to   the Indian subcontinent and south east Asia to the Philippines.  they inhabit forest edge,Mangroves,Scrub and wooded gardens. They forage in dense vegetation, hunting for insects. They have a shy disposition. Their breeding habits are similar to those species mentioned above.

Birds of the world-1   Larks featuring the Hoopoe larks.

Birds/world-10  species in the Cisticola genus.

Birds via Links bar.  Click on the Links banner .Scroll down to relevant box ,click this is a direct link to the article. Many with video and images.