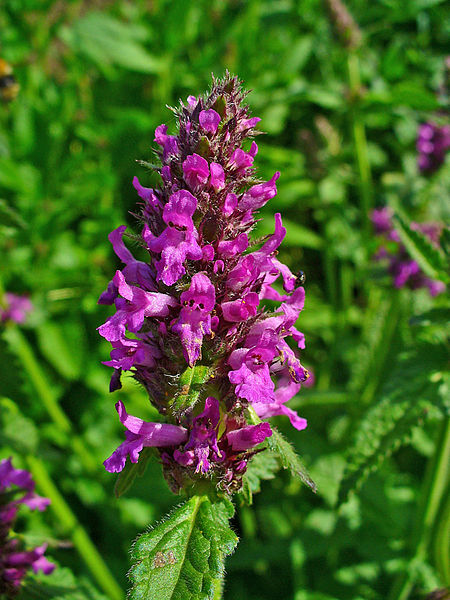 Wood betony, so called to distinguish it from the Water betony, belongs to the Labiate family {mint family} of plants. It was formerly given the Latin name of Betonica officinalis. the current Latin title of Stachys, derives from a Greek word meaning a spike and alludes to the arrangement of the flowers that form a spike. it is closely related to other species of Stachys , the most common one being the Hedge Woundwort ,Stachys sylvatica, and the Marsh Woundwort Stachys palustris. Both of these relatives were once regarded as excellent wound herbs. { see my hub Hedge woundwort}

This pretty plant was once highly valued in herbal medicine as we shall discover. As always we commence with a description of the subject under review 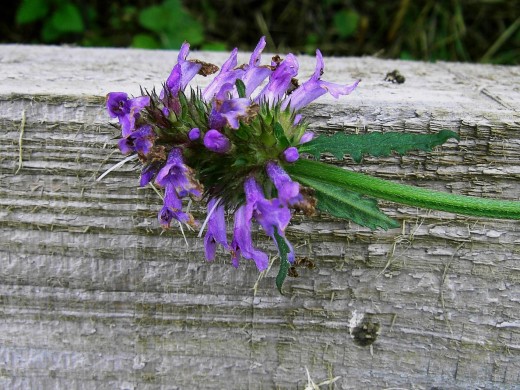 The root stock of Betony is perennial, woody and relatively thick. From this arise the stems to a height of one to three feet {30-90 cm }, they are slender,square and furrowed.

The foliage is placed at wide intervals consisting of a few pairs of oblong, stalk-less leaves, two to three inches long, and about three quarters to an inch broad. The margins of these leaves are roughly indented. As with other members of this group the foliage is arranged on alternative sides of the stalk. The longest leaves are stalked and are somewhat of an elongated heart , and grow at the base of the plant. All the leaves are rough textured, the whole surface is dotted with glands containing a bitter aromatic oil.

At the top of the stems are the two lipped flowers of a rich purplish red, arranged in dense rings or whorls which together form short spikes. In botanical parlance these are termed interrupted spikes. This because there are bare pieces of the stem appears with two to four stalk-less leaves and then more flowers above these. This arrangement is a good guide to its identification as other flowers of this family are arranged differently.

The calyx {sepals etc}, which supports each flower is crowned with sharp points each representing a sepal. The corolla {petals etc}, is a long tube ending in two lips, the upper one slightly arched, the lower one flat with three equal sized lobes. They bloom in July and August. these flowers are ,in the main, pollinated by bees.

The fruits are four brown, smooth and three cornered nutlets.

Betony growing in a meadow. 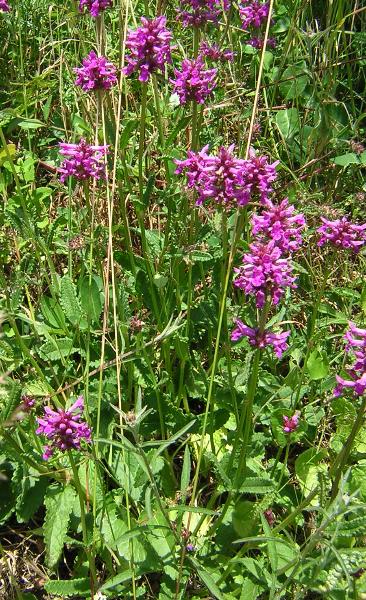 The common name of betony is said to have derived from the Celtic words bew { a head} + ton {good} , the Celts used the plant medicinally to cure headaches. the once commonly used alternative name of Bishop's wort is not so easily explained, the meaning has been lost in time.

In addition to its reputed medicinal virtues {below} the Betony was supposed by our ancestors to ward off spirits having a great power over them. Burton, expresses " driving away devils and despair". It appears it freed them from their influences in whatever place it grew. Thus on this account it was carefully planted in church yards, and hung around the neck as an amulet or charm. Testifying to this Eramus conveys " Those that carried it about with them, was also protected from fearful visions"

Antonio Musa, too, Physician of Octavius Ceaser, who Culpeper claims to have been an excellent physician, alleges the excellent reason that " It was not the practice of Octavius ceaser to keep fools about him", declares it is a great preservative against witchcraft. It would however, appear only to possess these supernatural powers under certain conditions, on which account it was harvested at a certain period. Here is poetry from the Stockholm med.M.S.}

" Who so betonye on him bore

Fro wykked sperytis it will hy were {guard}

In ye Month of August, on all wyse {always}

It must be gaderyd {gathered} before sunne ryse"

Almost more remarkable are the feats which may be achieved with serpents through the medium of the plant. However, a manoeuvre had to be performed summed up by Ibid.

" Who, so wyll don a serpent tere,

And he shalle never on lywe { alive} gon owte

But withe his tayle he shall hy schende

An with his mowth hy self to rende"

The Welsh name of Cribau St,Ffraid, { St. Brides Comb }, probably alludes to the notched outline of the lower lip of the corolla, or to the hairy or somewhat bristly appearance of the whole plant. Its dedication to St.Traid marked its sense of valuable properties, she being a very favoured Saint in the principality. Most countries it seems own legends associated with Betony.

Bartholinus, { Historia Anatomicarum Observationum}, relates, that persons gathering betony for medicinal purposes, have been seized with a kind of intoxification, which caused them to commit all sorts of extravagancies. other similar instances are on record, but it appears that if this is absolutely untrue, they are greatly exaggerated.

This plant was once utilized to dye wool to a fine durable brown colour, which was previously impregnated with a weak solution of bismuth. There can be few plants more lauded by the ancients than this species. Dioscorides and Galen highly celebrated its powers. The enthusiasm of the Greeks seems to have transcended to the Italians who had proverbs related to this species, one states 'That if you are ill,sell your coat and buy Betony' another translates as ' He has a s many virtues as Betony'.

Returning to the Ancients it was extolled by Lucius Apulius and Antonio Musa, physician to Augustus, as an infallible remedy in 47 different diseases, among which were paralysis, madness and consumption. Even as late as the 1800's a plaster of betony was recommended to consolidate fractures of the skull. However, it seems that some of these extravagant stories may have tended to obscure whatever medical virtues the plant, may in reality ,posses.

Murray, { Apparatus Medicaminum,vol 2,page 191}, with what would seem great reason, doubts whether this was indeed the Betony of Dioscorides, who's description could easily apply to many members of this family of plants. On the other hand, most writers, appear to agree that betony is not destitute of remedial virtues. Scropoli, for example, speaks highly of its cephalic {head}, and corroborant { strengthening} effects. Geoffroy,recommended it in paralysis, hemierania and vertigo. Ettmuller, recommended it for all kinds of headaches.

A small hand full of the plant was infused in half a pint of water was infused and it was claimed to be an excellent tea, which was of great service in bilious headaches and complaints of the stomach. Its efficacy in gout had also been advanced over the passing of time, but some writers seemed to question its reliability. The roots were said to be emetic and purgative. The dried flowers and leaves are sturnutatory and have been found to serviceable in headaches. Niemann, produced the following recipe--

Take of the herb Sage,Betony and Marjoram, all of each a hand full, and the root of Florentine iris, one ounce, and use them to make a powder.According to Dr. Woodville, this plant and the Eyebright should be used to make up a composition of herbal tobacco and snuffs.

Lady Wilkinson 'Weeds and Wild Flowers {1858} quotes " But { alas ! for the evanescence of herbaceous glories}, though the lalnt is known to posses powerful qualities, it is totally discarded from the modern medicine chest, being in fact too severe for the more enlightened system of practice, and it is even fast failing from the memory, and the notice of our not over-scrupulous rustic quacks."

One weird and amazing medical manuscript I came across in the course of my research, was the 'Meddygon Myddrai {Surgeon of Myddrai} who prescribed the use of Betony in diseases of the duramater. The bones of the head are first removed in such a manner as to expose the suffering brain. " An ointment composed of two parts Betony and one part Violets with salt butter was applied. This application is to be continued-if the injury be of a long standing-for nine days;or, in more recent complaints for a shorter time.At the termination of the period enjoined, the already loosened bones are to be removed and a salve applied of fresh butter and Violets, or if Violets are not in season, the white of an egg, the composition is then to be left until a membrane has grown over the brain". The physician who performed this operation In his mercy, he is to receive the fee of thirty shillings, or fifteen shillings and his food!

This manuscript is believed to be a copy {even the copy is rare, one was kept in Gray's Inn Lane, in the Library of a school } of an original manuscript written in AD.1230.

All the above information is for historical reference only. 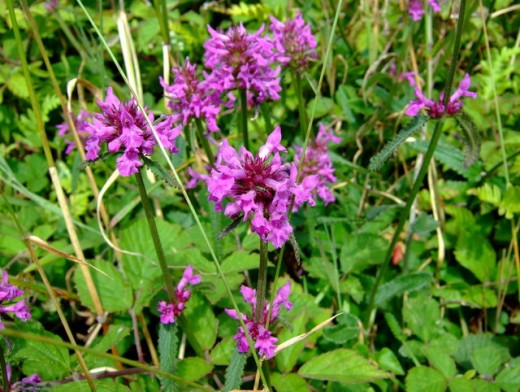 A weak infusion is sometimes taken in the form of a tea. It is used as an astringent to treat diarrhea and as a gargle to treat mouth and throat complaints, it has also been used to treat anxiety

Betony has a high tannin content, it also possesses sedative properties, relaxing nervous stress and tension. It is used as a cure for headaches and facial pain. In combination with other herbs it is employed against. catarrh  However, use should be avoided during pregnancy.

It is also advised that over dosing or prolonged use can lead to stomach irritation. Scientific research suggests that Betony can be helpful in the treatment of neuralgia as well as shingles. A tonic wine can be produced in combination with Vervain and Hyssop. The glycosides in wood Betony are found to have hypotensive affect, which can help to lower blood pressure, if administered correctly. However, these findings needs to be researched much more in order to establish its safety. {Do not take for blood pressure without seeking help from a professional herbalist's, and the advise of your doctor}

The parts used in modern day herbal preparations are the aerial parts and the root. The dosage recommended for an herbal infusion is a cup taken three times a day. Pour one cup of boiling water over one to two teaspoons of dried herb .Infuse for ten minutes to fifteen minutes, before straining. This infusion of the aerial parts for the purposes of a general tonic and relaxant.is made by using one teaspoon of the dried herb. This infusion can also be used as a gargle or mouthwash.

Poultices can be produced from the pulped foliage, and applied to wounds and bruises on the skin. if you are using a herb for the first time just use a little to test your body tolerance level.