Batrachia refers to any amphibians especially so to frogs and toads. The word batrachia is new Latin for frog from the Greek batrakos meaning frog.

They are a group of animals which inhabit the two worlds of water and land, as such they are known as amphibians. The word itself means having a double life from the Greek amphi indicating both sides + bios meaning life. Animals that find their food on land or in water, or to some alternately. the spawn or eggs are deposited in the water, or to some humid surface, where they have the advantage of the action of the water, however, because they float on the surface they have the action of the air at the same time.

Mass of frog spawn in a muddy pond.

Here in the UK, we are perhaps best acquainted with the spawn of the common frog, which are never deposited in deep water or in running streams which have currents. pools, ponds or ditches in which the water is shallow, and which are tangled with weeds in the spring, or which are otherwise show they are under the influence of the sun and atmosphere down to the very bottom are places which frogs select.

There, eggs float in their protective "jelly", but with one side exposed to the air. They are also exposed to the elements, pelted by rain at one time, or heated by the rays of the sun or even frozen by frosts. all these circumstances may occur alternately within a very short space of time. They are thus, exposed, too, without preparation by the parent animals, or at any case during this time, other than being cast upon the water and abandoned to the elements.

No other vertebrated animal leaves there eggs wholly unprotected or place them so blatantly exposed to the weather. However, the air, action of the light and the water are all required for the development of the Batrachia. In cold regions they are often frozen solid, yet this does not appear to injure them. For when the conditions become favourable once more the water that had been frozen is teeming with tadpoles

Some other species as for instance the common toad are much more retiring than the frog and consequently much more obscure in many ways. Among these is the fact that they seem to need much more sun than the frog to tempt them out of hibernation. they do not make an appearance till the ground has been warmed by the suns rays, and not then, until it has cooled again in some measure.

Still evenings after showers, or dewy evenings after sultry days are the favourite time for these harmless, yet generally despised little animals. They tend to breed later in the season than frogs and do not deposit their eggs or spawn so decidely in the water; yet humidity is required for natural development to occur as it is often encountered in showery weather where water has been partially stagnant. The eggs of the common toad are in long bead like strings {see photo below} ,and gelatinous. Spawn is found later in the season, at least this is true of colder districts.

The eggs or spawn of Bufo bufo the common toad 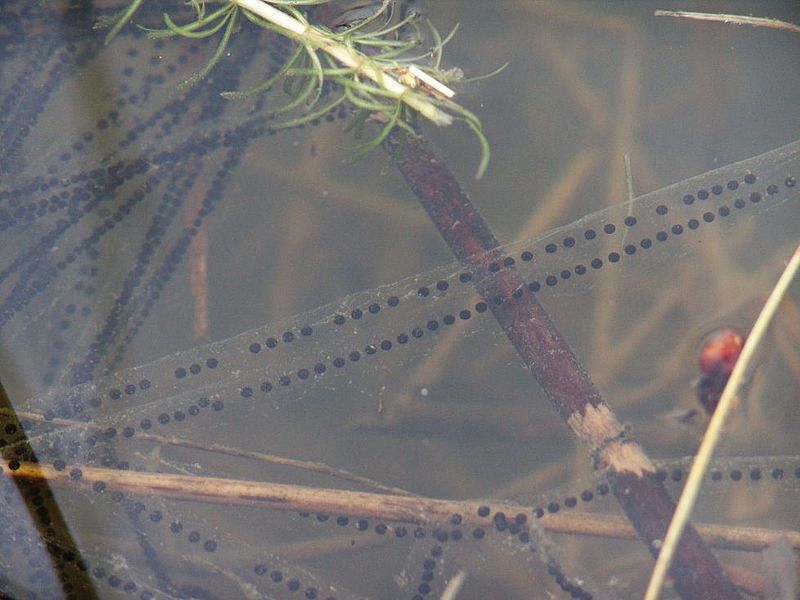 Batrachia have not only this double action of water and atmospheric air in bringing them forward in the egg state, but they also have a double life afterwards, or more strictly speaking have two successive lives-a first in the water and the second one , whether in land or in that liquid they breathe air.

Nearly everyone is familiar with tadpoles, or frogs in their first or aquatic  stage of their existence. They are of a dusky -blackish colour, oval in form with long fleshy tails, compressed laterally and fringed with a sort of fin. other than this tail they have no other means of moving around. at this stage of their lives the mouth part has two horny-mandibles forming a sort of "beak". They are very voracious, as is generally the case with insects in the larval stage, as for an example the nymphs of dragonflies, or in that period when they immediately hatch from their eggs. They eat animal or vegetable matter without discrimination. At this stage of their lives they breathe water and are incapable of breathing air.

The gills are placed on the side of their necks, supported by arches of cartilage, and having their entrance  from the mouth, but without any gill lid to the openings for the escape of water. Where conditions are favourable tadpoles will be present in great numbers. The pools and ditches where they breed sometimes get dry as the summer advances-although frogs do not deposit their eggs in water that is of a temporary nature which is certain to dry out before tadpoles undertake their transformation and able to escape and take to land. 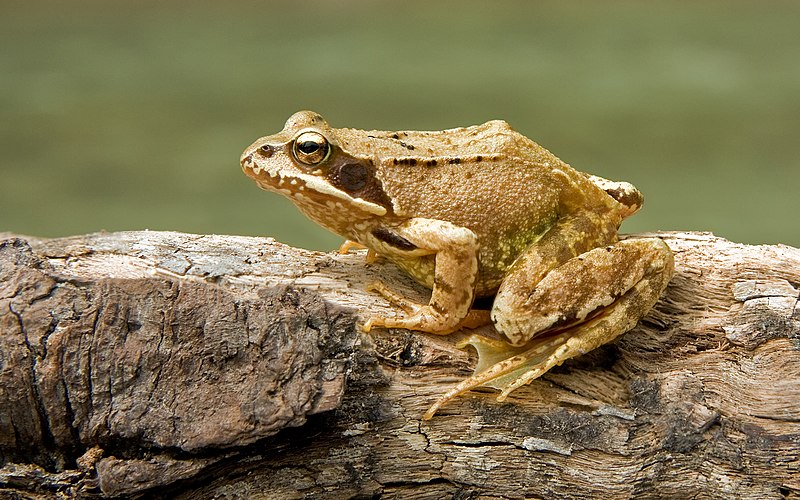 How frogs and other creatures choose their nursery water that helps to maintain the continuance of the species is by instinct, but this is only to be expected, for this is part of the general system upon which nature always works. No matter where the eggs are deposited or even if they have been left to their own fate, they are generally safe in nature's hands.

However, nature runs her own economy and every stage of the lives of her animals she puts to use. the abundance of the frog spawn and resulting tadpoles has a purpose. For in nature there is no selfishness, no production that exists for itself only. Nature's economy deems that the eggs, tadpole and perfect frog all have a part to perform, a purpose for each stage of their lives. the natural uses are two fold. they are useful in what they consume and/or that by which they are consumed, and if there is a stage of life change both uses change with it.

It is quite possible that if it were not for tadpoles eating tiny creatures and their larvae the water in which they all occur would become pestilent with the remains of small life. However, as this occurs the tadpoles themselves become food for another race of feeders. The ducks and other birds which nestle in the marshes or on the banks and dabble for food in the shallow waters, would in many instances, fare but scantily, if the spawn of frogs did not supply them in the early part of the season, and the tadpoles when in a more advanced, hence the abundance of tadpoles in their early stages is not a waste, but a wise provision for other races. Indeed where frogs have vacated an area, for as an example through some drainage scheme, the birds have also departed. there is no doubt that the one is, to a certain extent the reason for the other.

And when the frogs are full grown they still have this double use. In water or upon land, the retrain the super abundance of insect life. The leap which is a prominent mode of motion of the frog, and which all the four footed portion of this race can perform, is a motion of capture as well as for progression. They also procure insects by shooting out there long tongue.

Nature has bestowed this attribute on all amphibians and reptiles and in this respect they can be considered as nature's " extraordinary labourers". They remain torpid and still till the season which requires them comes around once more, then they are ready for action in an instant.

When they are close to the end of the aquatic stage of their lives they undergo changes of external and internal structure, which prepares them for the next new stage. The development of the new structures rather proceeds the shedding or absorption of the old ones. Tadpoles may be seen with their feet pretty well developed, and the swimming tail still intact. There is also a period of their lives, however, short which both sets of breathing apparatus can act. When the lugs assume their superiority, the characters of the land animal predominates throughout the whole structure.

Adult frogs breathe through their nostrils and not through their mouths. Thus when they are hibernating the mouth id permanently closed.

Many species of frogs and more so the toads are at odds with out perception of beauty, yet these harmless animals do a great deal of good especially do the gardener by eating slugs and other, sometimes serious, pests and their larvae that would certainly attack flowers and vegetables.

Bufo bufo the common toad does a great deal of good in gardens and on allotments.