When I was at school { which admittedly was a long time ago} nature study was part of the curriculum and a " double" lesson each week was designated to that study. I realise when I look back upon these lessons they were the seeds from which my love of nature grew.

One such lesson The Study of Fish I will share with you here. Not for us were pictures in books or diagrams upon a blackboard, no, a real fish was brought into the classroom, in a rectangular tank {globular tanks distort the image of the fish} for us to study. I remember very clearly that it was a small trout. We were asked to observe the fish for a couple of minutes then to comment in turn of what we had observed.

The most obvious comments referred to how graceful the fish was swimming. Then we were asked to describe the shape, the answers included spindle shaped, wedge shaped torpedo shaped and even boat shaped , as I recall. it was then pointed out to us that we needed to look at the details of the fish and not merely at the fish.. Note , we were told, the pointed head, the sunken eyes without the presence of eye lids, the tightly fitting jaws and the absence of external ears. Obvious details, yet they had to be pointed out to us. it became an essential lesson which I have used until this day-look at the details of a subject not merely at the subject.Beneath the backbone of the fish a " swim bladder" or " air bladder" that helps the fish to remain bouyant. " How is the fish moving ? " we were asked, but before any one could answer the lecturer continued " Look at the tail, class, look at the tail" It was then explained to us that the chief organ of locomotion is the muscular tail which is bent first to one side then to the other. This is due to muscular contraction. As the muscles on one side contract the tail is curved towards the side. The muscles on the opposite side contract even more rapidly hence the tail is straightened. It is the second contraction that propels the fish forwards.

Brown trout with tail to one side as it swims. 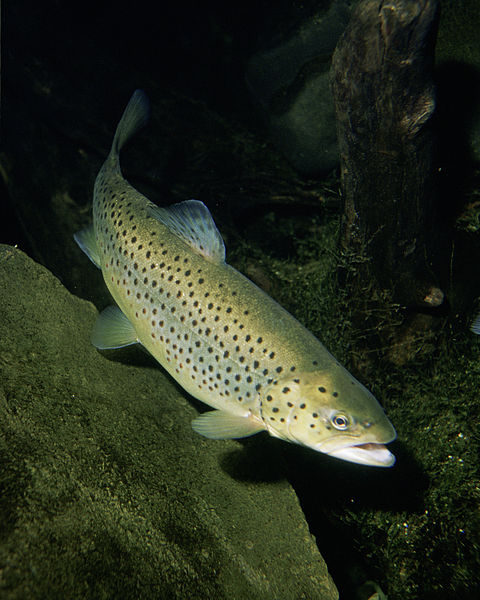 The art of swimming.

But while the back end of the fish-" the posterior end boy" is curved to one side the front end "the anterior end" is curved in the other. Thus the efficiency of swimming therefore depends on the synchronisation of the anterior and posterior parts of the body.

If one has ever seen a fish floating dead on the surface, they are usually floating upside down. this is due to the fact that the centre of gravity in a fishes body is high up.

The fore fins sometimes helps in steering, but yet again, the main steering organ is the tail, the fore fins sometimes help the fish to move. However, the movement of paired fins do not considerably help in locomotion. But they do { in many cases} become essential to keep fish in its normal position in the water. For the unpaired fins act as a vertical keel in the great majority of fish, they steady the swimming by preventing imbalance. Observation will show that they can be raised or lowered as required. In species such as sea horses the unpaired dorsal fins are very mobile and is the main swimming organ.

Fish and thier breathing.

Breathing movements was also taught to us by observation of minnows, and sticklebacks in a second rectangular tank. The mouth is opened and closed many times in a minute, and at the same time closing and opening of the external gill chamber was evident. The water sucked into the mouth cavity is forced over the gills and passes out beneath the gill cover. In fishes named above these essential breathing movements are quite rapid. At this point we were told that when a goldfish is carelessly kept in water where the oxygen has been depleted the rate of breathing become abnormally fast. The fish is becoming suffocated. This is not nice to observe but unfortunately due to lack of knowledge or neglect,this is a common incidence.

Actions of a skate swimming. 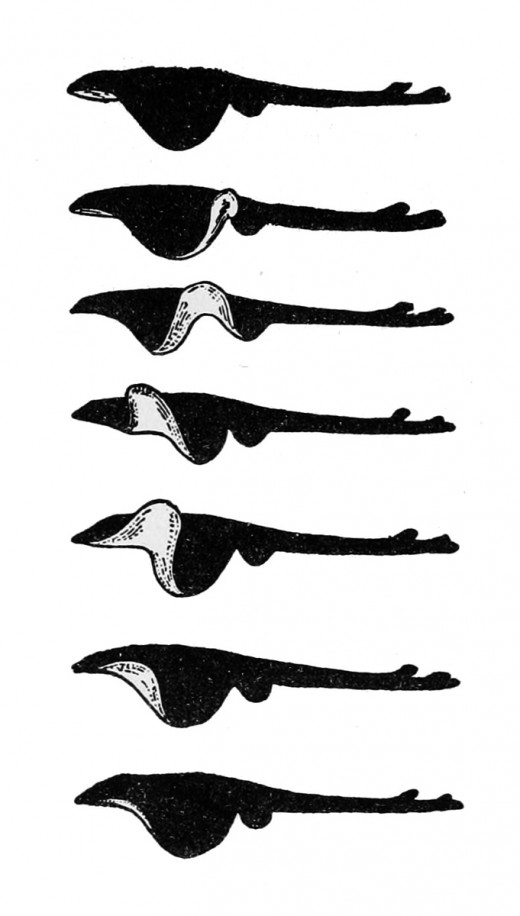 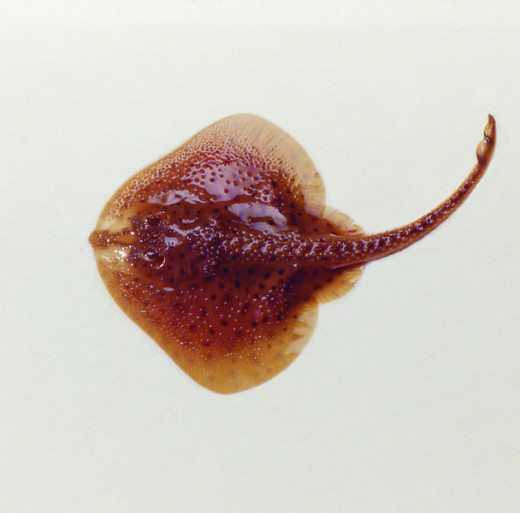 Finally in this study of fish, as I recall, we concluded with the study of the external characters, such as the shape of the tail and scales once again these are things I have looked at but not observed in great detail. During this part of the lesson we were asked to pay attention to the following points, in particular to shape.

The shape of the typical fish for example, is designed for rapid locomotion, the flat fish, as for an example the skate {pictured above} is suited for a life at the bottom of the sea. The eel shape is suited for burrowing in mud and for creeping through holes. Of course there are a plethora of species and shapes that occur ion the world of fin folk, but each and everyone is designed for a specific use.

Most fish have a symetrical tail and the stroke of such a tail make the fish propel forward without necessarily falling or rising. Conversely there are fish with unsymetrical tails as for example sharks, dogfish and sturgeon are much more developed in the upper portion than in the lower, its stroke, therefore, tends to bring the head towards the floor of the sea.These type of tail is usually associated with a ventral mouth and with the habit of feeding on the bottom of the sea.

" Have you noticed " enquired our lecturer " That most fishes have a distinct line along each side of the body" which I, in all honesty had not,another example of looking but not seeing. he went on to explain these lines usually divide into several branches on the head. It is actually a "canal" protected by scales with a group of sensitive cells at intervals and with pores opening to the exterior. The line and associated cells are thought to be extremely sensitive to touch.

We were also taught, at this point, that this lateral line system is only found in fish and amphibians. Indeed in many amphibians it is confined to the aquatic stage of their lives. In higher animals its place is taken by nerve ending in the skin. we were asked to compare the skin of fish to the skin of higher animals as for an example the rabbit. Under the term skin are included two very different layers, the outer layer, epidermis and the inner dermis. The epidermis is constantly being worn away and renewed. The inner dermis is more permanent and contains the blood vessels. it is easy to show that a scratch does not draw blood unless in penetrates through to the inner dermis. in all animals higher than a fish the dermis is cotains connective tissue, blood vessels,nerve fibres and muscle fibres. In fishes there is little development of muscle fibres in the dermis.

The epidermis in fishes is characteristically slimy. there are abundant glandular cells or mucus cells, the living matter of which uses itself up making slime. Anyone who has handled a fish will know that the epidermis comes away easily. As with our own skin the colour is a product of the dermis.In fish the colour is due to a variety of pigments contained in special cells called the chromatophores, and to a deposit of waste guanin, in the guise of minute granules or discs, that have refective properties.

The silvery appearance and the rainbow like hues of many fishes, are thus due to the guanin.However, the most noted feature is the development of scales. A bird is known by its feathers and a fish by its scales. Indeed, in some species at least,fish can be identified by their scales alone. take a mackeral or herring, amore or less constant peculiarities of the scales make them instantly recognisable, thus, it was pointed out, that one might regard them as a trivial part of the fish, is one of the most reliable, as far as identification is concerned, namely the structure of the scales.

These unfortunate fish ended up at the fishmongers. 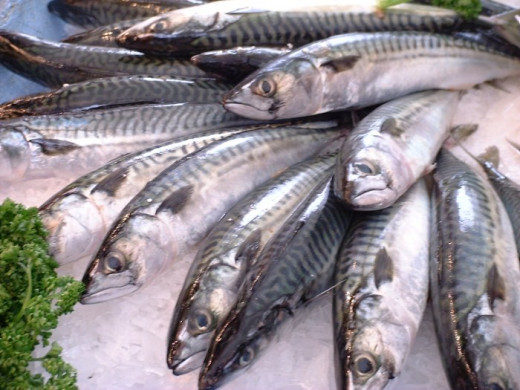 Recognizing fish by thier scales.

An experienced ornithologist may happen upon a single feather whilst out walking on the moor, from this he may well be able to state which species the feather came from. Similarly an expert in fish {Ichtyologist, another word taught that day which I have always remembered} can by just seeing a square inch of skin may well identify which species of fish it belonged to.

Even more amazing, I found, was the next fact for our attention. The concentric rings on the surface of the scales of many fishes can help to determine the age of the fish, as do the rings off wood in the trunk of a tree. The close set lines of growth, we were informed, indicated winter or wintry conditions. The wider lines of growth indicate summer or a period of summer like conditions. Thus a single scale might not only inform us of the species of fish, but might even tell us the approximate age of the fish.

Scales are absent in relatively few fish such as the electric eel { and most Silurids, including the cat fish }. In other species they may appear to be absent, for as an example the slippery eel, the scales are minute, but, perfectly formed.

There endeth the lesson with a promise of the Life history of fishes being the subject of our nexr nature study. what we would be taught to us at that time, I had no idea, only the fact that I would be taught a plethora of other things I would not be aware of.