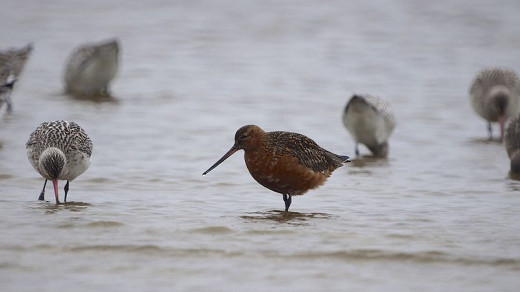 The Barred-tailed Godwit belongs to the Order of birds as the Charadriiformes and placed in the family Scolopacidae. The genus name of Limosa derives from the Latin limus indicating mud and the specific name lapponica alludes to Lapland {Northern Scandinavia}.

They breed in Northern Scandinavia, Northern Asia Africa and Australia. They occur on coastal tundra,on migration mudflats and flooded fields. They feed on a diet of invertebrates especially insects,mollusc, crustaceans and worms.

Alaskan Godwits winter in New Zealand, but make the 11,000 mile journey without stopping, which takes about seven days,probably the longest non-stop journey of any bird.

In Europe they are not birds of Conservation concern with a population size during the summer from between 1,100 to four thousand pairs. Population sizes vary from country to country here are some examples of breeding pair estimates.

The Gaelic name for the bird is Cearra-ghob , the Welsh Rhostog Gwnffonfrith and the Irish Guilbneach striocearrach. Source for the above information the BTO. the European estimates source Birdlife}

Here we look at this wading bird its life style and habits along with historical observations from past ornithologists and other eminent writers. As always we will commence with a description of the subject under review. 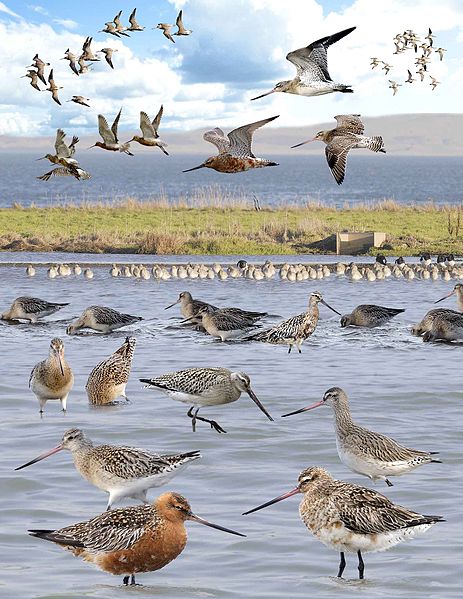 The adult male in summer dress has a bill about three inches long of a dark brown colour,but lighter at the base and decidedly turned upwards towards the end,the iris is dark brown. The head,neck and under parts are chestnut,this colouring also appearing on the back,short flight feathers and upper tail coverts, in the form of marginal streaks and saw tooth marks to the feathers,as also,on the shoulders and back where they cover the greater part of the feathers.

The lower back and rump are white with dark grey centers to the feathers clearly visible in the breeding season which pass into bars on the upper tail coverts and tail. The legs and feet are nearly black. The female is usually larger and longer in the bill but her plumage has much less chestnut colouring.

In winter plumage {normally seen on birds in the UK} the chestnut colouring is entirely gone. Roughly speaking, the upper parts are ashy grey, striped and barred with browner grey. The under parts are are white, tinged with ashey-brown on breast and throat, and with darker stripes to these. The rump is pure white,the long tail coverts barred with ashey brown, but tail no longer barred. The tail feathers are now ash grey, with a dash of browner grey down the shafts.

The birds are fairly easy to recognize because of their long legs and upturned bill and also the fact that there are few other birds of their size.The males weigh around 190-400 grams. The females 260-630 grams.

It has long been known that these migratory birds make extremely long journeys from their wintering grounds to their breeding grounds. However, Science Daily.com quoting from US.Geological Survey date September, 17, 2007, confirm just how epic some of these journeys are.

"A female Bar-tailed Godwit, has touched down in New Zealand following an epic 18,000 {29,000km } series of flights tracked by satellite, including, the longest non-stop flight recorded by any land bird..On March 17 2007,E7,departed Miranda on the north Island of New Zealand,and flew non-stop to China, completing the 6,300 mile long flight in about 8 days. There she settled in for a five week long stay-over, before departing for the breeding grounds. The bird was tagged with a small battery powered satellite transmitter. On the evening of may 1,she headed out over the sea of Japan and the North pacific,eventually turning north east towards Alaska,crossing the end of the Alaskan peninsula en route, to her eventual nesting area on the Yukon-Kuskokwim Riaver Delta in western Alaska.This flight was accomplished non-stop,covering some 4,500 miles in five days."

I find this fact to be an amazing feat for a bird that weighs between 260 and 630 grams. 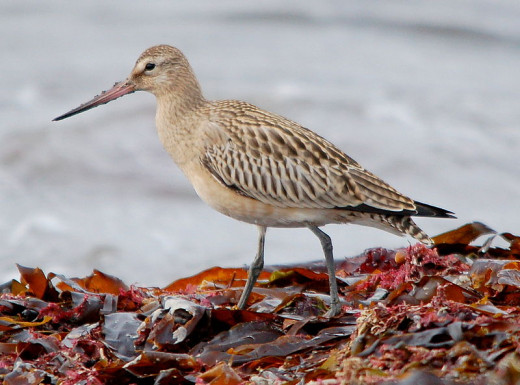 Barred tailed Godwits frequent muddy and sandy sea shores. They are very social birds mixing freely on the feeding grounds with any other species of wader.Coward in his book 'Birds of Cheshire ' { north west England} relates that Brockholes, says it is sometimes common in autumn on the Dee marshes, and, Dr.Dobie saw large flocks there in the autumn of 1892, when he obtained a number of specimens.Mr.R Newstead states that examples from the Dee Marshes are often brought to the Grosvenor Museum; but he has not seen any from the Mersey estuary, where the birds seem to be scarcer.

In North America there are three native species. The Bar tailed Godwit, the Hudsonian Godwit and Marbled Godwit. The Black-tailed Godwit is there, classed as a vagrant from across the Atlantic ocean and is occasionally seen on the eastern Coast of North America. The Bar-tailed Godwit In North America is known as a sub-species Limosa lapponica baueri which breeds in Western Alaska. The US Shorebird Conservation Plan lists the Bar-tailed Godwit as a species of 'High Concern' based on its low relative abundance, threats on non-breeding grounds and restricted US breeding distribution. The breeding population in North America is limited to certain coastal plain regions of western Alaska, placing them at an higher risk to potential disturbance {Source Audubon Society} .

The name Godwit, is probably derived from Old English and thought to be a corruption of 'Good sense',alluding to their wariness. However, in my experience they do not seem to be as wary as other wading birds such as the Greenshank or the Curlew.

Here in the UK they are winter visitors and passage migrants in Spring and Autumn, they forage by walking slowly and probing deeply into the mud with their long sensitive bills. The female having a longer bill can forage deeper than the males. During high tide it seeks pastures where the grass is very short or comparatively dry bare places where it often takes the opportunity of resting on one leg with its bill under the wing.

When searching for food some say that it moves its bill from side to side like the Avocet,or dabbles in the water like ducks. Its actions in the mud are very much like those of the curlew,and they often stand quite still for a long time. Bonhote, states " I have never seen the bird moving its bill from side to side in the manner of the Avocet,its feeding is much more like the Greenshank.

The diet during the autumn and winter months consists of sand worms, crustaceans, insects {among seaweed}, small shells and other minute marine creatures. The feeding time is generally commenced in high water,as soon as it can get on the mud,and it gradually follows the retreating tide then is driven back again. It often rests on sand banks and mudflats at the mouth of the river,congregating with Plovers,Dunlin,Knot and other wading species.

In summer its food consists of more or less of insects worms,etc, which it procures from their muddy haunts. When disturbed it flies off in a moderately quick manner, usually uttering an alarm note as it rises. Before descending again it often skims along with outstretched wings for some distance. Flocks coming into roost may arrive quite high up and dive down with much acrobatic twisting and rolling. On the shore it rarely runs, but rather walks sedately, often wading into deep water. 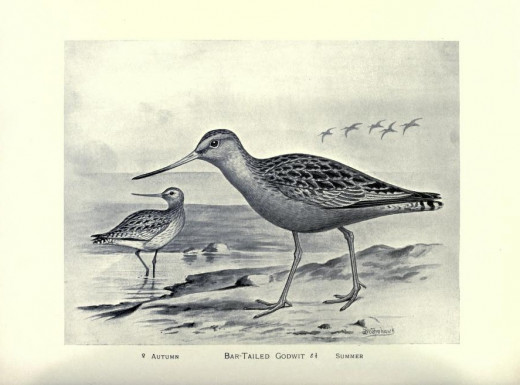 British birds with their nest and eggs { Butler} 1893 Courtesy of the BHL.

In the days before wild birds became protected by law it was quite legal to capture, shoot or keep them in captivity. Thankfully these days are now confined {in the main} to history. below is an extract from Seebohm's book ' A History of British Birds' 1895. " Bar-tailed Godwits are often caught in the flight nets which are spread over the enormous mud flats of Lincolnshire {eastern England}. These birds migrate at night, and appear to fly at no great height. Dixon has known them to be most absurdly tame on this coast, often allowing him to approach within a few feet as they stood,utterly unmindful of his presence. They sometimes leave the mud flats and repair to the drier land;and are very fond of frequenting the narrower dykes and streams with which these flats are intersected in all directions as soon has the tide has left them. When fired at, the birds often return after flying a little distance. As the season advances they become more wary"

They were regularly shot for the table. Sir Thomas Browne {1600's} asserts " Godwits accounted the daintiest dish in England"

Godwits first breed about the age of two years.males defend their territory and attract females with an aerial display high above the nesting grounds. The nest, such as it is, is located on the ground,being merely a scrape lined with sparce grass, moss or and lichen. The female will deposit four eggs which have a background colour of olive green streaked with brown. They closely resemble those of the Black tailed Godwit but are slightly smaller. The eggs are incubated by both parents for a period of about 21 days.

The young leave the nest shortly after hatching and follow their parents to a marshy area. here they will be taught to find their own food. They become fully independent in about thirty days 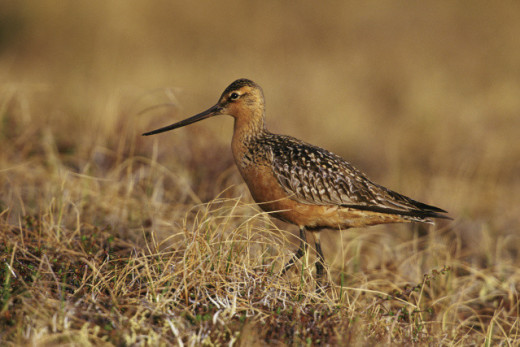