Image from American medicinal Courtesy of the Biodiversity Heritage Library. 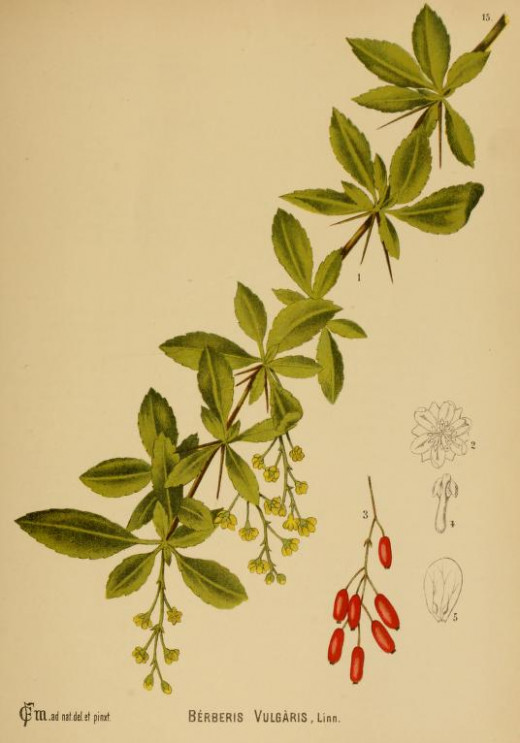 Here I review the common barberry and its past and present medicinal uses. There will be notes from past herbalists along with images and description. Insects of various kinds seen particularly partial to these blooms, which are remarkable for its contractile stamens, as we shall see later in the text.

It has long been used medicinally but also to make culinary preparations. I will start this review as always with a description of our subject. 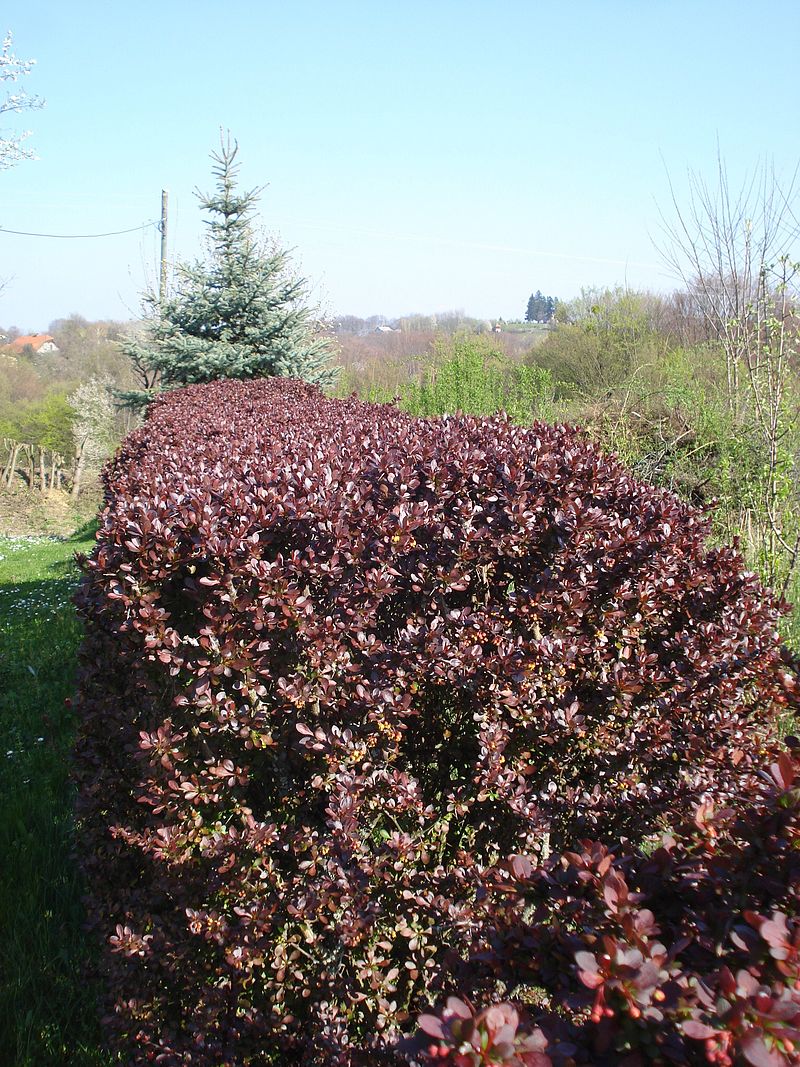 The common barberry also referred to as the Pipperidge bush {USA} , has a root which is woody, creeping, branched and of a yellowish green colour. The stems are erect, and attain the height of anything from six to eight feet. The branches are diffuse, covered with a smooth greyish coloured bark, and furnished at each joint with acute spines, generally three of them. The leaves are arranged four or five together with finely serrated margins with the teeth terminating in small spines.

The flowers spring from the axils of the leaves and are produced in simple, pendulous elongated racemes from the end of the branches. The calyx is inferior, deciduous and of a greenish yellow colour, consisting of six leaves {bracts} three of them alternatively smaller and furnished with Bracteae {small bracts} at the base.

The corolla is composed of six concave rounded petals, of a bright yellow colour with two glands at the base of each. The stamens which number six are opposite the petals and tipped with bifid anthers. The fruit is an ovoid, cylindrical berry, a little curved, bright red, tipped with a black style and containing two oblong seeds. The berries are about half an inch long.

Barberry is a hardy shrub, growing in almost all temperate climates. It is found in woods and hedges in May in parts of England and Scotland it flowers in June.

Linnaeus first recorded the fact that is now well known to botanists that the stamens of Barberry are contractile. This can easily be observed on a summers day when bees visit the flower in search of honey.They touch the filaments and the anthers quickly turn inwards and discharge the pollen. The same affect is instantly produced by touching them with a sharp point of a needle, and, is seen not only in our native species , but also in many others.

Dr Gorden of Hull { North East England}, in one of his lectures during the 1800's, made remarks on the contractile stamens of Barberry-" This contractile effect in this case, as far as I have observed, is always much greater than the amount of the cause by which it is produced. In experiments I have witnessed, that relaxation will take place at the same time that the mechanical cause which excited the contraction continues to be impressed. Moreover the stamen of the Barberry can be made to contract even after it has been removed from the body."

Illustration of the components of barberry. 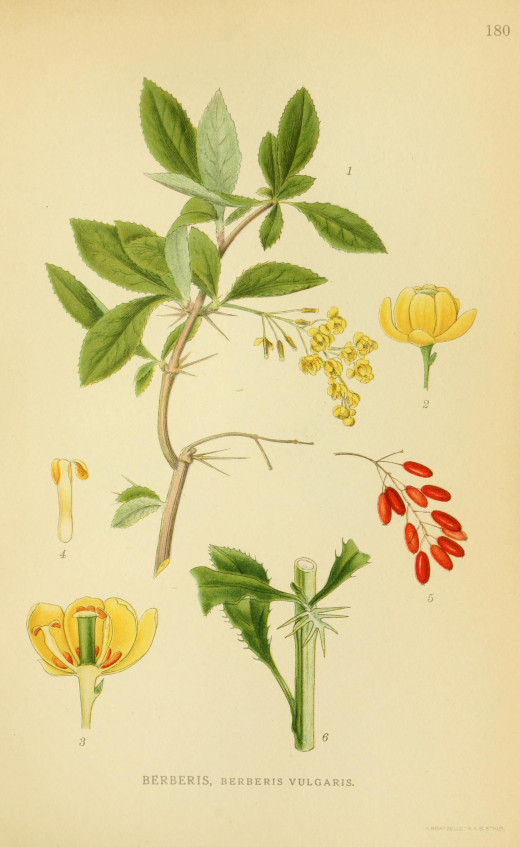 Medicinal and other uses of Barberry.

According to the British Flora Medica {1858} the juice of the fruit is austere and very acid," It stains blue paper of a deep red colour" the acid is oxalic. It goes on to state that the roots boiled in a ley, yield a yellow colour, which is used to dye wool, cotton and flax, and it is also used by cabinet makers and curriers. The inner bark of the stem with the assistance of Alum affords a yellow dye.

The foliage is acidic and was said to be eaten by goats and sheep, but refused by horses and swine. The flowers emit an unpleasant smell when close to them , but, from a distance the smell is more agreeable. The ripe fruit formed a well known preserve and the unripe berries were pickled in the same manner as capers.

Farmers were said to dislike the plant, or to be more precise, its reputed baneful effect on corn. Dr Withering stated " This shrub should never be permitted to grow in corn lands, for the ears of wheat that grow near it never fill, and its influence in this respect has been known to extend as far as three to four hundred yards across a field."

However, this was disputed, Sir J.Banks supposed that the Accidium berberidis, an insect which generally infests the shrub, generates the dust, which, is carried by the winds, and alights on wheat and other growing corn, gave rise to the Puccinia, a minute fungi which closed up the pores of the leaves and appeared like rust or mildew"

Herbalist's of archaic times inform us that the bark and fruit of this plant may be used in medicine, the former in diarrhoea and dysentries, the latter on account of their acid juice was a useful component of beverages taken during the time of fever, scurvy and bilious disorders. The fruit was prepared in a variety of ways and it was made into compotes, syrup, jelly or jam.

These different preparations were also used in the forming of drinks which in kinds of inflammatory diseases, scalding of urine and especially typhus fevers were reputedly taken with great advantage. Prosper Alpinus attributed his recovery from the plague to the following advise given by Egyptian physicians who gave him no other medicine than the syrup of Barberries, with the addition of a small quantity of fennel seed.

Simon Pauli was also reputed to have followed the advise to cure a malignant fever accompanied by diarrhoea that afflicted him in Paris, which gave rise to him recommending the plant very simply in his works and presented various preparations from this plant. There follows to examples that he shared--The juice may thus be prepared---

Take of ripe Barberries, any quantity. Bruise them with a mortar and set them aside for several days in a cool place.

Then express the juice and leave as before. Strain it, pour it into long necked bottles. Cover it with a stratum of oil and keep it in the cellar.

Syrup of barberry--Take of the expressed and filtered juice of Barberries-one pint. White sugar one pound and a half, boil them together and strain. This is an excellent gargle for sore throats

According to Millspaugh in his book American Medicinal Plants {1887} -"Berberis vulgaris is indigenous to Great Britain and other parts of Europe and is becoming quite thoroughly naturalized here, especially in the Eastern States, blossoming in May and June. It is cultivated in many parts of the country as an ornamental bush on account of its beautiful berries. Our own species Berberis canadensis is a shrub about three feet high with less bristly teeth to the leaves and have a few flowered raceme. Berberis, like many others excellent remedies, has been dismissed this year {1882} from the U.S. Ph.. In the Ecletic Materia Medica it is still retained, though not as an official preparation."

Millspaugh concludes by stating the physiological action of Berberis in large doses produces feverishness, inflammation of the mucous membranes from the throat to the intestines and dysentry. It causes also a high degree of inflammation of the kidneys and hematuria. It seems to act with much force upon the venous system causing pelvic engorgements and hemorrhoids

" Its use in early medicine was purely symptomatic and the actions explained above given refers to man. Upon animals, no such effect appears to follow, even though experiments were made with the alkaloid Berberin"

The above medicinal history is for historical interest only and not meant as a guide to preparations for home use. 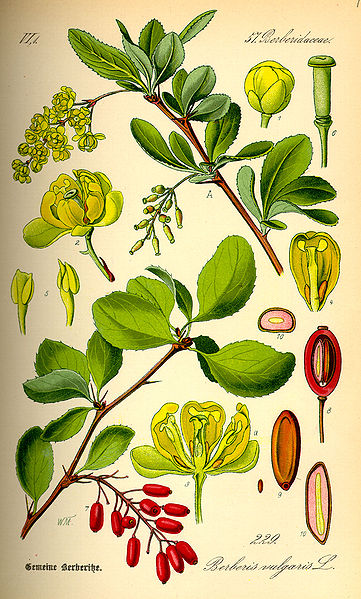 As previously referred to the cultivation of Berberis vulgaris has been prohibited in many areas of the United States and imports are also forbidden. This is due to the fact that this species is an alternative host plant for a rust fungi that affects wheat and other cereal crops.

The fruit has been employed in sweet dishes. The Victorian cook Mrs. Beeton recommended the berries to be used as a garnish. One of the constituents is a substance called berbamine which is reputed to have a positive affect on the cardio -vascular system and has been used to treat heart problems.

Although it is used to treat morning sickness in Pakistan and other countries it is advised not to take Barberry during pregnancy in the USA and many European countries. To large a dose or prolonged over use of barberry can produce side affects which are characterized by lethargy, stupor, dizziness, vomiting and loose bowel movements. However Barbery can be purchased in commercial products such as tablets and capsules where the correct dosage is ready prepared. Always seek advise before taking products that include Barberry.

Where the growing of Berberis is not prohibited they can generally be propagated by means of suckers, which are produced plentiful by the root system, and they should be propagated by layering.

The best time for laying down the branches is in autumn {fall} and the young shoots of the same year are best. These should be well rooted by the following autumn, when they may be taken off and planted where they are designed to remain.

They may also be propagated by cuttings taken in the autumn and planted in sandy soil, in a cold frame, or by seeds sown in spring.

Even if the shrub is not grown for the purpose of medicinal or culinary uses they make an attractive addition to the shrubbery. Below are images of Berberis vulgaris showing their beauty at different seasons 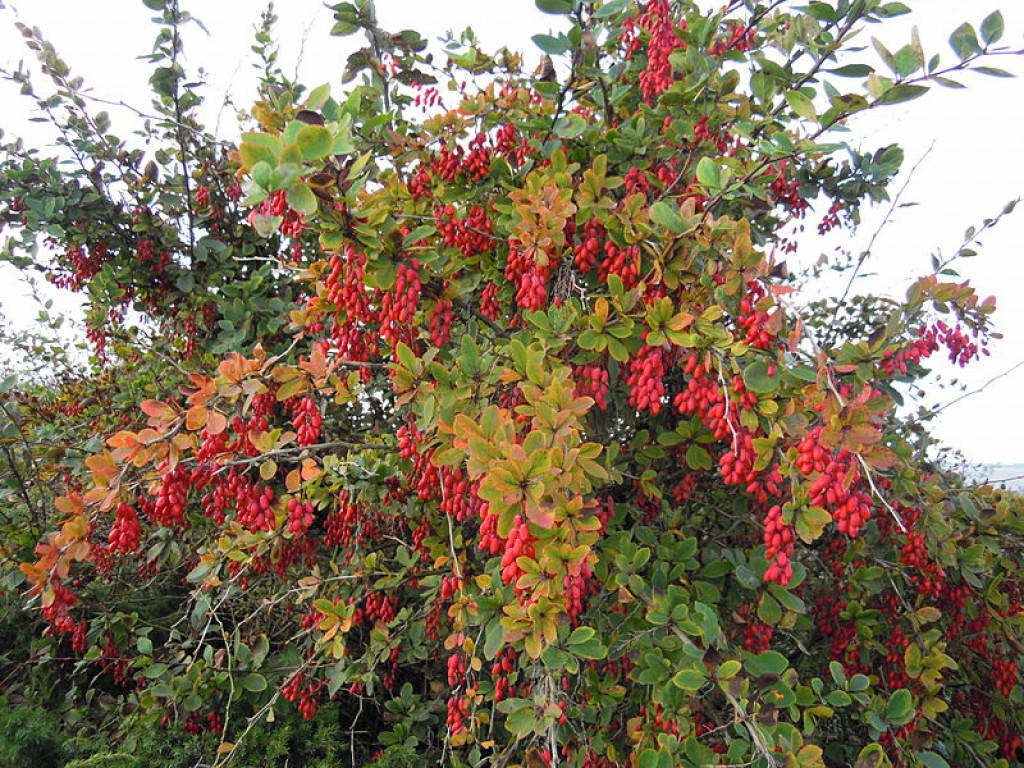 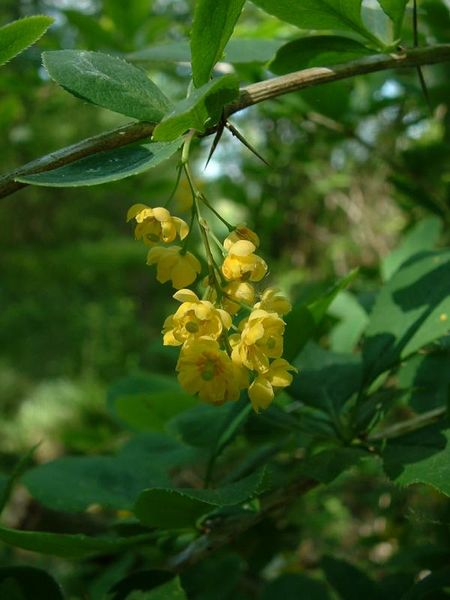 Than k you for visiting.