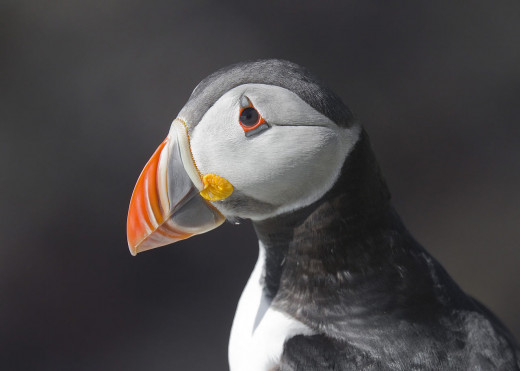 Andreas Trepte is a fine wildlife photographer his work can be viewed at www.photo-natur.de

This charming little Puffin belongs to the order of birds known as the Charadriiformes and the family Alcidae within that order. They are placed in the genus Fraterculawhich derives from the Medieval Latin fratercululus indicating a Friar {the black and white plumage was thought to resemble a Friar's robe}. The specific name of arctica derives from the Greek arkitos and inddicates northern.

In the UK they are placed on the Amber list of Conservation concern because the species is of European conservation concern and because of localized breeding . The UK population is estimated at 580,000 pairs in summer. Here they are classed as migrant/resident breeder and passage /winter visitor. { source BTO}-2014

They are birds of the coasts and islands when breeding otherwise they are Pelagic.

Horned puffin of the North pacific Ocean in non-breeding plumage. 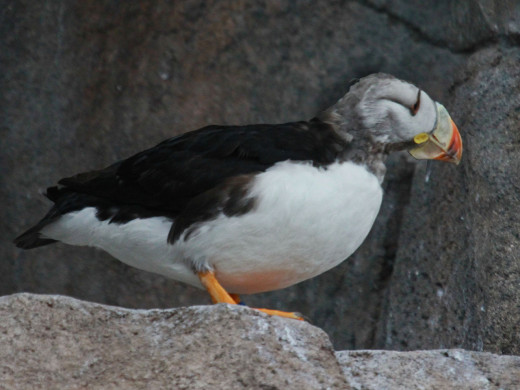 Puffins are any of three species of small Alcids {Auks} with brightly coloured beaks during the breeding season. They are primarily pelage birds that feed on fish and sand eels, by diving in the water. They breed in large colonies on coastal cliffs and off shore islands besting in crevices among rocks or in burrows in the soil.

Two species the Tufted Puffin and the Horned Puffin are found in the North pacific Ocean, while our subject the Atlantic puffin is found in the North Atlantic ocean. All Puffins are predominantly black and white in plumage,a stocky build and have large beaks. They shed the colourful outer parts of the Bill after the breeding season, leaving a smaller, duller beak. Whilst in the air they beat their short wings rapidly often flying low over the surface of the water. These wings are adapted for swimming,they have a 'flying' technique under water.

It is interesting that the word Puffin was originally applied to the Manx Shearwater, which in 1652 was referred to as the Manx Puffin. Puffin derives from an Anglo-Norman word pophyn or Poffin. In Ireland the name was sometimes applied to the related Razorbill.

Here we review the Atlantic puffin and as always we commence with a description of the species under review. 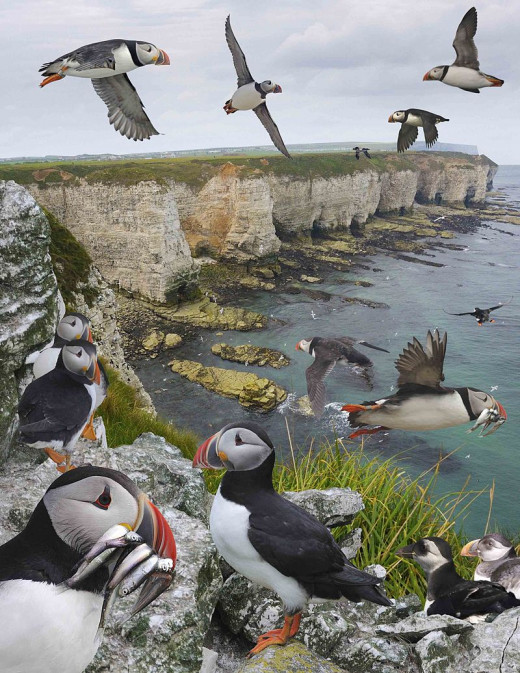 At a glance--- These Puffins are stocky short winged and short tailed birds with black upper parts and brownish grey under parts. They are twenty six to twenty nine centimetres { ten to eleven and a half } inches long and weigh three hundred and ten to five hundred grams. { eleven to eighteen ounces }. The head has a black cap the face mainly white and the feet are orange -red. The Bill appears large and colourful during the breeding season.

In more detail. The Adult in summer has the iris pale grey. Eyelid orange red. The patches above and below the eye are blackish grey. The large ridge at the base of the upper mandible a dull yellow. The smaller ridge at the base of the lower mandible, the space in front a bluish grey. The fore-part of the bill orange red,with three ridges between the grey space and the ridge of the culmen and gonys, the hindmost one on the upper mandible partly yellow. it is probable that the bill is not fully developed for more than one year. The rosette of crinkled skin at the angle of the bill is orange yellow.

The face and sides of the head and chin light smoke-grey,nearly white in some cases, an irregular sooty-grey patch near and below the base of the lower mandible, the outer lower edge of the grey face palest in colour. The forehead,and crown,nape,back and sides of the neck,collar around the throat,back, wings and tail are black. The forehead ,crown and occiput { the back part of the head}are shaded with grey.The collar in front inclines to sooty brown.

The primaries are browner than the rest of the wings and paler on the inner webs.A narrow light line crosses just above the nape. The thighs are greyish-brown. The neck below the collar in front, breast,belly,under tail coverts and sides of the body white, the last and the flanks marked blackish. The tarsi and feet reddish-orange, claws a dark-horn colour.

The sexes are alike, with the exception that the bill of the female is rather less high at the base,and the fact that the males are slightly larger than the females,but unless they are standing side by side they are almost impossible to distinguish in the field.

They are the smallest of the three species of Puffins but can be told from the Horned Puffin by the steel blue triangle at the base of the beak.

In winter the Puffins present a rather different appearance, not because of any remarkable change in the colours of its plumage, but consequent upon certain portions of the bill and other ornaments of the head, being shed or moulted or otherwise lost. The bill is then smaller and much duller in colour.

A trio of puffins. 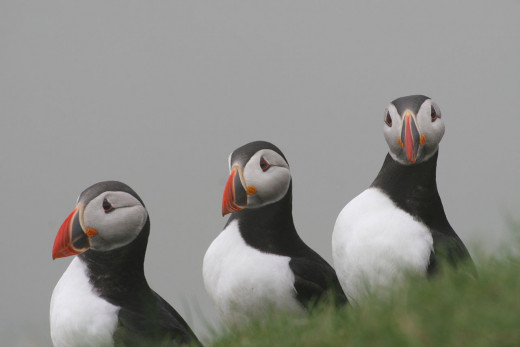 The Puffin resorts to various parts of our coasts {UK},and the off shore islands such as Shetland and the Orkney islands {Scotland} and in great numbers but not as many as in the past. They also breed on the coasts of Pembrokeshire {Wales},for example Skomer and Ramsey in large numbers.

Writing of Puffins in Pembrokeshire the Rev. Murray A. Mathews {1800's},stated he did not think he was exaggerating to claim that the Puffins in number ,are in summer, equal to all other birds in the county added together. Colonies are also found on other parts of the coast of Wales.

Other places to find these charming little birds are at the RSPB's, Bempton Cliffs in North Yorkshire {England}, the South Stack, Anglesey,{North Wales} and the Farne Islands and Coquet Island in Northumberland. Those found on the coasts of the UK during winter are probably visitors from further north. During the winter months it is not a common bird by any means on any part of our coasts,and its presence in British waters is chiefly indicated by individuals washed up,dead, on the shore,after stormy weather or driven inland.However, the dead birds washed ashore are far less numerous than the Razorbills and Guillemots in the same condition.

Puffins must keep far out to sea,but their are records of them travelling far south. records also revealed the Puffin has the unenviable reputation of being blown in land in autumn or late autumn,chiefly more frequently than any other species of the Alcidae,although since the great immigration of January 1895,the inland records of the little Auk were perhaps more numerous. However, it seems that Puffins in their first year were sometimes reported as little Auks. Butler 1889,notes " In Oxfordshire seven instances of the occurrence of the Puffin have come under my notice."

However,prettily the bright colouring of the Puffin may contrast with green turf,grey rocks and the blue sea, the aspect of this little bird is somewhat grotesque. The brilliantly coloured breeding bill of the bird is large and out of all proportion to the size of the bird,together with a certain air of stolidity and mock solemnity which the bird seems to wear, combine to produce a comical appearance. These birds are capable of drinking sea water.

At their breeding stations Puffins may be very confiding and allow a boat to approach them very closely before they bob under the water to reappear at a short distance away. they fly rapidly and well rising easily from the water and are as much at home in the air. They walk and even run readily,treading on their feet alone and not on the tarsi,nor do they always,when standing still,rest on the tarsi,as well as the feet.

The Puffin gives the name to two islands of the UK, Lundy, off the coast of Devon { from the Norse name of the bird-Lunde+ey an island. The other off the coast of Anglesey {North Wales} which is commonly referred to as 'Puffin island'.

Puffins on a cliff 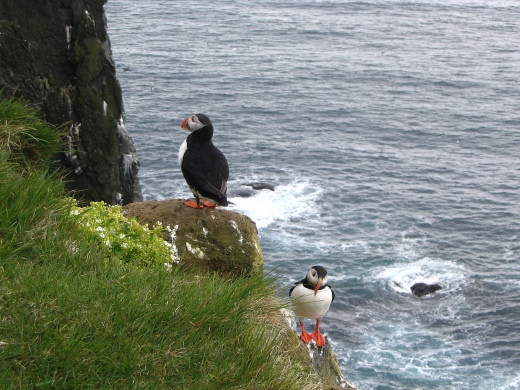 At their breeding places Puffins tend to bow to each other and continually look around by twisting their heads in all directions. they are usually five years old before they reach their breeding age. They resort to rocky cliffs,low grassy islands and rocky islands for the purpose of breeding. They tend to breed in colonies which may often be a great size. the female will deposit her eggs in the crevices in rocks,in burrows in light sandy soils either those already dug,but unused by rabbits,or they dig their own.

Puffins dig with their feet and bills in the soft soil or between rocks. Their bills are utilized to cut into the earth,and their feet are employed to remove any loose material. Generally self dug burrows are two to three feet long. At the back of the burrow they sometimes line the floor with soft feathers or grass. Puffins utter a growling call from inside the burrow.

Records from Flamborough suggests that the Puffins there seem to appreciate the the shelves of bright green turf in the more broken parts of the cliffs.

Illustration of a puffin with chicks. 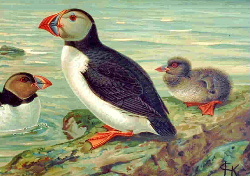 Puffins lay a single egg,which is white and has a dull slightly rough surface with spots,large or small,and sometimes streaks of light brown and lavender-grey. The amount of the markings vary considerable.

The eggs are incubated by the female,with occasional relief from the male for 36-43 days. this will be the only brood they rear. When the chick hatches it is fed on fish such as Herring,Hake,Capelin and Sand eels. The chicks are referred to as 'Pufflings' They are covered in a uniform blackish brown down.

Illustration of adult in breeding condition. 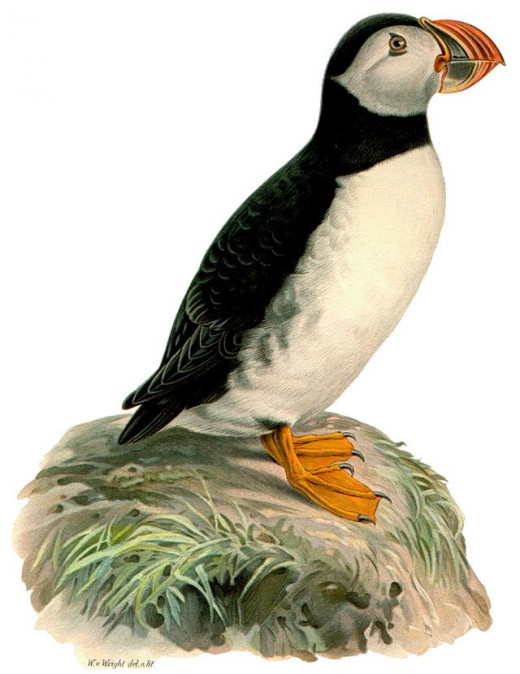 In the young bird the bill is not so deep,the culmen is only slightly curved and does not rise abruptly where it joins the forehead. there is only a slight ridge on the upper mandible.the face and sides of the head and chin are dusky grey,and there is a patch of dull black in front of and partly around the eye. The collar is sooty grey and hardly complete in front.

Immediately after the breeding season ,in August, the puffins leave the shore and go out to sea. They will remain out on the open sea regardless of the weather. It is thought that they can dive to a depth of 200 feet in search of food.

Natural predators include the Great Black Backed Gull, this and other gulls will also steal the Puffins catch of fish from them if they get the opportunity. Large gulls will kill and eat Puffins. In days gone by before the advent of intensive commercial fishing man had little impact on these beautiful birds.

These days over fishing has led to declines and even loss of colonies in various parts of their range ,hunting Puffins for food and their feathers have also taken its toll.Animals too, such as the Fox,Rat,Stoat and Weasels may also cause havoc on a colony.

Oil spillage contamination will destroy the water proofing on their feathers and they also die from swallowing the oil. Chemicals and other pollutants {all man made},can also decimate populations both on land and especially in the oceans. Thus they are good indicators of the oceans health, or otherwise. Global warming raising the temperature of the oceans may also cause them problems in the future. 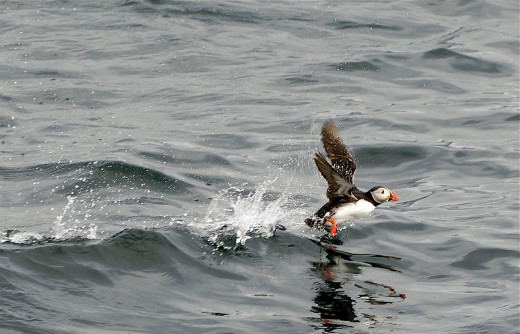 UK  Puffins are on the Red list of conservation concern