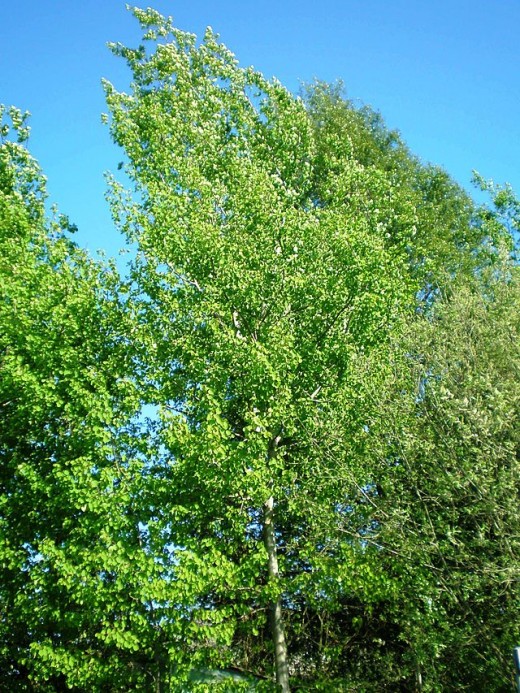 It is the intention on this page to help those who wish to identify trees,but are not sure of the species. Most people commence their identification process by recognizing the form and colour of the leaves This is fine and an excellent place to start during the spring and summer months, but of little use in winter when the branches are naked and bare. However, every tree has a characteristic{s} which help to identify it even in the depths of winter.

Here we review the Aspen and its close allies,and with the aid of excellent images and descriptive text the observant will pick up identification pointers which will help them to recognise the species.

Basic components of the Aspen 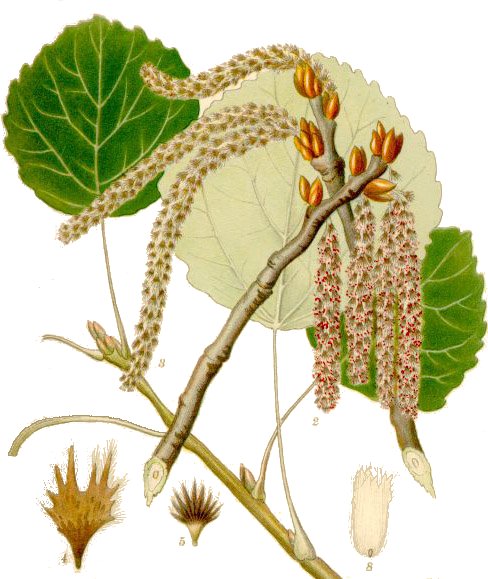 Male catkins of the Aspen 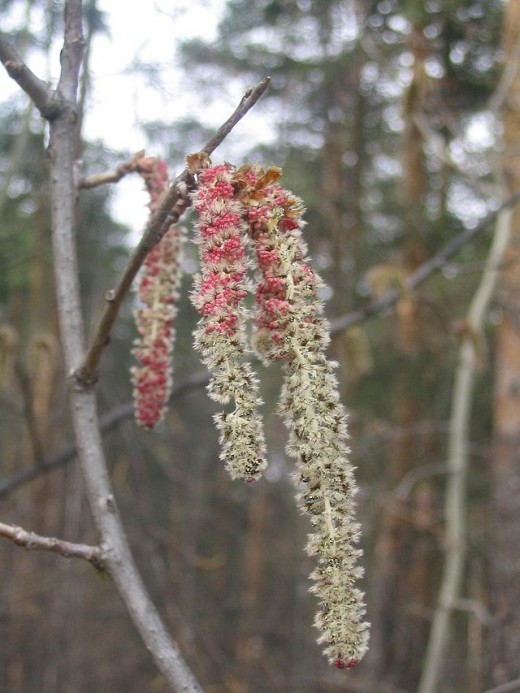 Chief  characteristics of the Aspen

The chief structural characteristics of the Aspen are that it shoots are downy and its leaves are on very long stalks. Those that occur on the suckers are heart-shaped, pointed but not toothed. Those on the branches rounded,with in-curved teeth, and all of them are silky on the under surface when young though generally becoming smooth later.

The buds are slightly viscid and the flowers of the female catkins are densely crowded together. The lobed catkin scales are fringed with hairs, the two stigmas are each divided into two erect segments and in the male plant each catkin-scale bears generally eight stamens inits axils.

In March or April the bare grey boughs or the brownish shoots are thickly covered by the catkins the male ones produce a general effect of a warm vinous red. 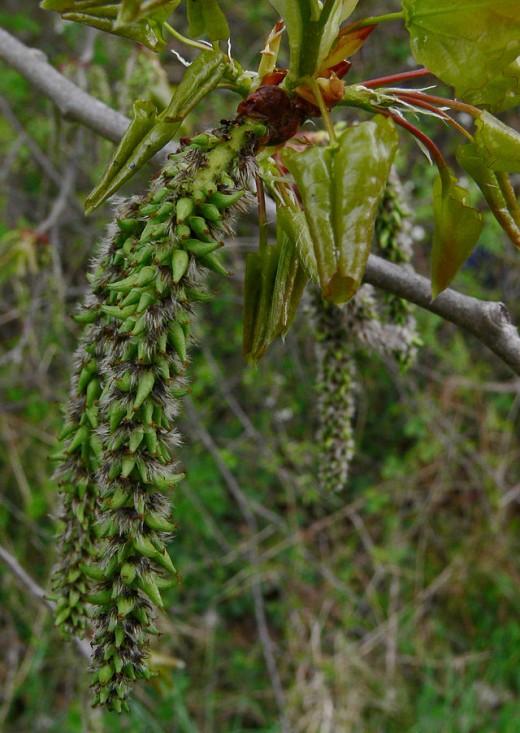 Old trunk of the Aspen. 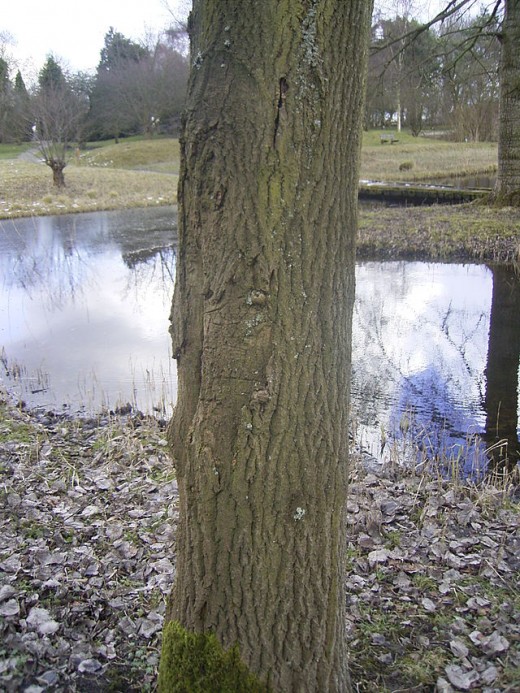 The aspen is not usually a large tree, though Louden { 1844} records a specimen at Castle Howard in Yorkshire {England} 130 feet high and three and and a half feet in diameter,and various other examples reaching diameters of four feet, and one at Bothwell Castle, Renfrewshire {Scotland} ,hundred and seventeen feet in the spread of its branches. The latter tree was eighty years old , but the species is not a long lived one,and, like allnpoplars is very liable to rot from the tearing off of boughs by wind,and to subsequent attacks by various insects. As the tree gets older its horizontal branches become pendulous.

Like all species with a wide geographical range the aspen, though not now much esteemed as timber, has been applied to a variety of uses. In Asia it grows mainly in the north of Asia minor,and is abundant through Russia and Through northern Africa and the south of Europe.It is indigenous in Ireland and grows as far north as Sutherland in Scotland.

A much younger trunk 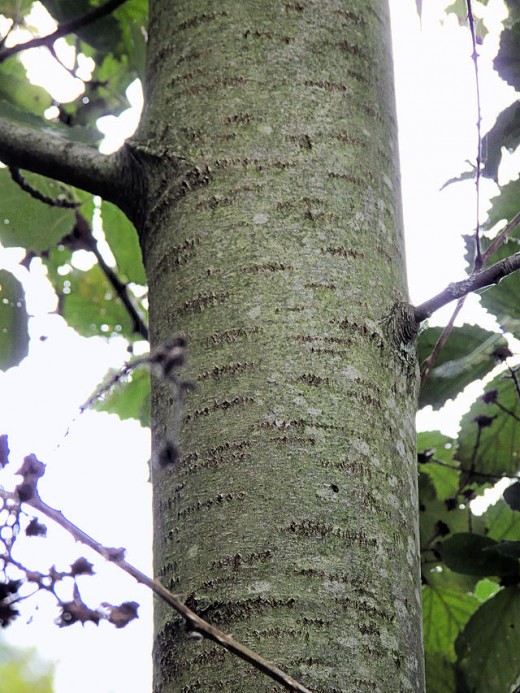 Caterpillar of the Polar Hawk moth 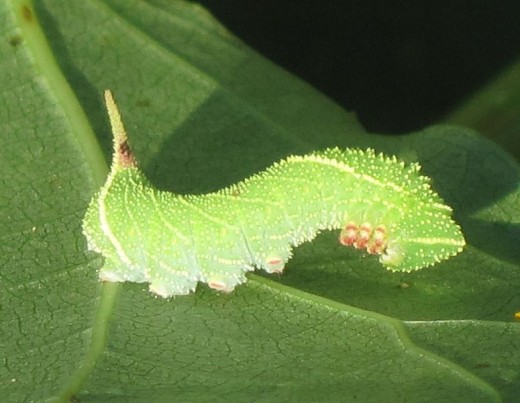 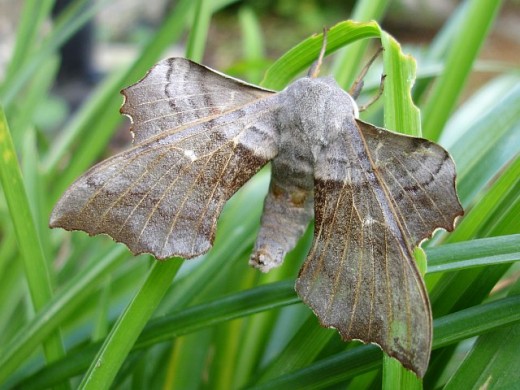 Its bark has been employed in tannin and its wood as been used in turnery and cooperage as well as for many minor purposes such as Sabots and clogs,and to a lesser extent for Gunpowder charcoal.

Formerly however, it must have been much more valued than it is today, for in the reign of Henry V an act of Parliament was passed which was not repealed until the reign of James I,to prevent its consumption other than for making arrows, with a penalty of one hundred shillings,if used for making pattens or Cogs. Spencer alluded to it as ' The aspine good for staves'

Its roots, running near the surface are apt, in impoverished soil.to send up a profusion of suckers, springing from its roots, make the tree undesirable for lawns ,meadows or even hedgerows.The leaves when they fall in autumn will also kill the grass, though whilst on the tree their constant motion so permits the passage of light as to render its shade but very slightly injurious to any plants beneath it. Because of its shallow roots it is a tree always vulnerable to high winds.

If the tree is coppiced they yield an abundant amount of 'poles' if they are cut every seven or eight years, or even 15-20 years. The rapid growth and usually moderate shade of this species adapt it well to act as a 'nurse' in moist woodland for the Oak and the Beech and it may be propagated either by cuttings or more readily by seed.

The wood of aspen and indeed all soft poplars are naturally very liable to the burrowing insect larvae. Here in the UK the caterpillars of the Goat moth and the Wood leopard moth are among the most destructive. Entomologists also associate the poplars with the beautiful Poplar hawk moth. 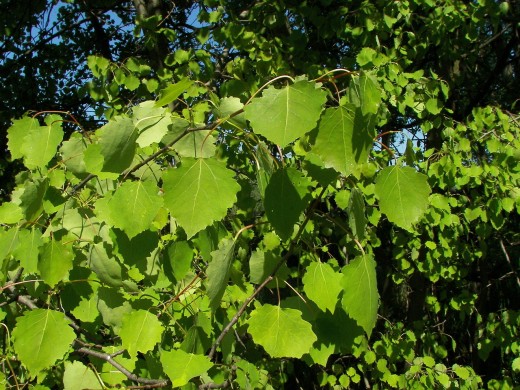 Close up of leaf and shoot 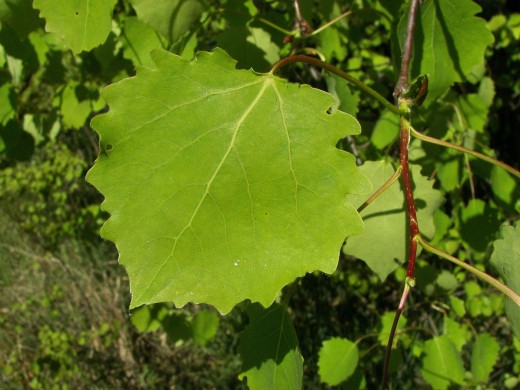 The rustling of the leaves { which many value the tree for} which are scarcely ever still even when appearing to be still, is the most striking feature of the tree and the point of most allusions of literature.

Mr Ruskin, in whose 'Modern painting' the aspen is treated with such loving detail, when discussing Homer's treatment of the landsacpe,writes the following words describing the scene between Ulysses and Nausicaa---

" The spot to which she directs him-" is another piece of landscape,composed of a beautiful grove of aspen poplars, a fountain,and a meadow"

" A perfect calm;that not a break,

Is heard to quiver through the closing woods,

Or rustling turn the many -twinkling leaves,

The herbalist John Gerard {1500's} conveys " In English Aspe and Aspen tree,and may also be called Tremble,after the French name,considering it is the matter where of women's tongues are made { as poets and some others report} ,which seldom cease wagging"

Far more strikingly poetical is the old Scottish and English biblical legend on the subject,so beautifully told by Mrs. Herman's--

" A cause more deep,

To the stranfe restlessness of those wan leaves;

The cross, he deems, the blessed cross, whereon

The meek redeemer bowed his head to death,

Was formed of Aspen wood,and since that hour

Through all its race the pale tree hath sent down

Making them tremulous,when not a breeze,

The light lines of the shining gossamer"

The story alludes to the legend, that because aspen was used to make the cross on which our saviour died, its leaves have trembled in fear ever since.

The constant agitation of the foliage by the least breath of wind is owing to the unusual and flattened form of the leaf stalk,common throughout the whole genus but much more conspicuous in the Aspen. To this fact the tree owes its French name,and it is explained scientifically by the length of the broad and heavy leaf is suspended on a support which itself readily acted on by the smallest atmospheric movement. The rustling noise is of course produced by the friction of the leaves on one another.

Boulger relates " When autumn its 'gold and guildes the falling leaf',spreads its bridge of splendid decay over each leaf in succession, the f colour, but its rustling gives it even more melancholy effect than before"

Aspen leaves after the fall in Autumn. 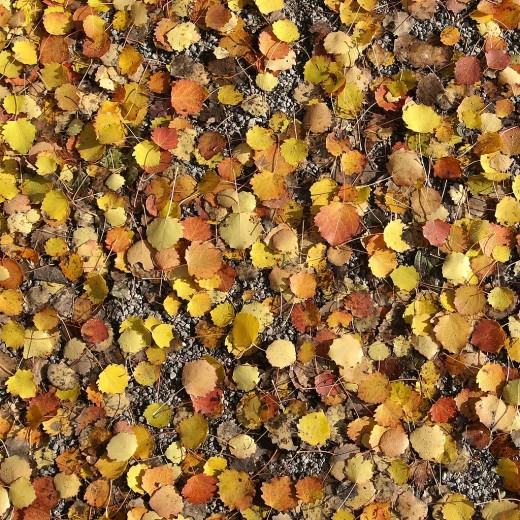 The American Aspen,according to Ferdinand Mathews,'Familiar Trees and their leaves' 1896, is not commonly known by this name, "It is most frequently called by country people as 'popple' a corruption of poplar. It seems to me that a more significant name would be the 'trembling Aspen', for the leaves flutter with the slightest zephyr."

" It is never large and,although, in Kentucky it may attain the height of forty five feet,in other parts of the country it does not exceed twenty five feet. The aspen is often mistaken for the gray or white birch,because both trees have a whitish trunk, sparse horizontal lower and limbs and both are similar in form. But these two trees have leaves that are totally different."

" The birch has exceedingly brilliant light green foliage,which reflects the sunlight and quite often dazzles the eye, while the aspen has a whitish foliage without the suspicion of shininess."

In these more modern times more common names have been utilized,but the most generally used for the tree is the Quaking aspen. It is the most widely distributed tree in North America it occurs from Canada down to Mexico.

The Quaking Aspen is the State tree of Utah. The tree produces glorious displays of colour during the fall.

There are concerns for the Aspen in parts of North America due to a disease known as 'die-back' this had been known to wipe out whole groves or stands. Yet at other times trees that are standing next to each other show different effects, one tree may be affected and the other may not. Scientists are working on the possible causes. 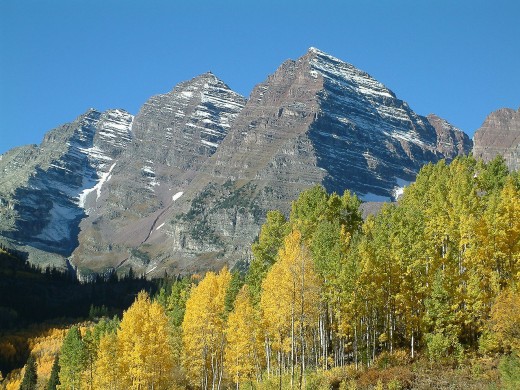