Ants are a very common , very numerous and highly interesting genus of insects,of which nearly everyone is familiar with. They belong to the Order Hymenoptera or that that have four membranous wings, in which the nerves { any of the stiff chitinous rods that forms the supporting framework  of an insects wings,veins} are comparatively few or inconspicuous.

They belong to that section of the order which have no auger {an instrument for boring holes into the bodies of animals, or the substance of vegetables.}, in order to lay their eggs there, for the purpose of being hatched. Many females belonging to this order of insects, have stings with which they inflict poisonous wounds.

Ants however, have no stings, but, at the place where the sting is usually situated in others of this section, ants have glands which secrete a very pungent liquid. They insert this liquid  after they have bitten with their jaws, thus causing much pain to the creature that has been bitten.

Ants are , {like many of their allies} heterogymous, that is to say having to types of female, one type which is fertile and one type that is not. Thus it can be said there are three types of ant in the colony, males, females and under developed females. These under developed females have perfectly formed external bodies, but the sexual parts are merely rudimental and they are incapable of breeding. these females greatly exceed the others both in number and in activity.

It would seem that the lives of insects which have threefold distribution of sexes are very laborious , more so than perhaps of any other living creatures, and as they are exceedingly  numerous they have many enemies, thus they multiply at a rate much greater than that of most insects.

The young are also reared with more care , and their social habits, their diligence, their ingenuity and their courtesy to each other are quite fascinating. The eggs of most insects are left to nature and providence. they are deposited on or in substances which afford nourishment to the young when they hatch out. Indeed may cases, the parents may well be dead when the eggs hatch. So the young insects are left to fend for themselves and as far as the parents are concerned no labour is involved bar the depositing of their eggs.

In ant colonies the neuter or nursing ants certainly do pay a lot of attention and care to their young up to the period when they escape from their cocoons or pupae cases, after which they are capable of fending for themselves and become independent members of the colony. The nursing ants will move eggs from both heat and light, they remove them from the influence of damp and rain and they feed them when they are in their larvae state.

In ants as in all insects which contain numerous individuals with undeveloped sexual powers, all the males appear to be perfect animals, however, to all useful and efficient purposes they are inferior even to the undeveloped females. they seem to exist for one purpose only the single operation of mating, and once this operation has been performed they die. They have no weapons of self defence, they have scarcely the means of finding their own food, and they take no share whatsoever in the labours of the community.

It is true that no winged ants appear in the earlier months of the year, although then the wingless ones are equally numerous and industrious. but once the heat arrives in the later summer months, then the winged ants become by no means rare. in such localities where ants exist and especially where ant hills are large and numerous they are often encountered in such large numbers as to cloud the atmosphere.

Large ant hills like the one constructed by the red wood ant can produced thousands of winged females late in the summer months.

The express reason for these wings are for mating purposes only. Studies have revealed that these winged ants {which are male and female} can be told apart. the males are considerably smaller, much more slender and feeble on the legs, they can hardly walk. The wings of the female are flimsy, but in all other respects they are robust and they walk well. It seems that winged males are unable to cope with the wind which bends their wings and blows them about like dust.

When the aerial mating { known as the nuptial flight} has occurred the females make their descent to the ground, after which they remove their wings as quickly as possible and after the removal they are very difficult to distinguish, by the layman at least, from the ordinary females. this casting of the wings is a milestone in the lives of these females. They will seek a suitable place to begin a new colony and their eggs will be laid.

The life of an ant starts from an egg. If the egg is fertilised the progeny will be female, if not it will be male. the larvae are mobile and is fed by  and cared for by the workers.larva grow through a series of moults and enter the pupae stage. The larvae and pupae need to be kept at a fairly constant temperature to ensure proper development and so they are often moved about by the workers to the various brood chambers within the colony.

The first workers to hatch are weak and smaller than later workers, but they begin to serve the colony immediately. They enlarge the nest, forage for food and care attentively for other eggs.this is how the new colony commences in most species. Ant colonies can be long lived. it is thought that the queens can live for many years, workers may live for 1-3 years. Males however, only live a few weeks. Ant queens are estimated to live 100 times longer than solitary insects of the same size. 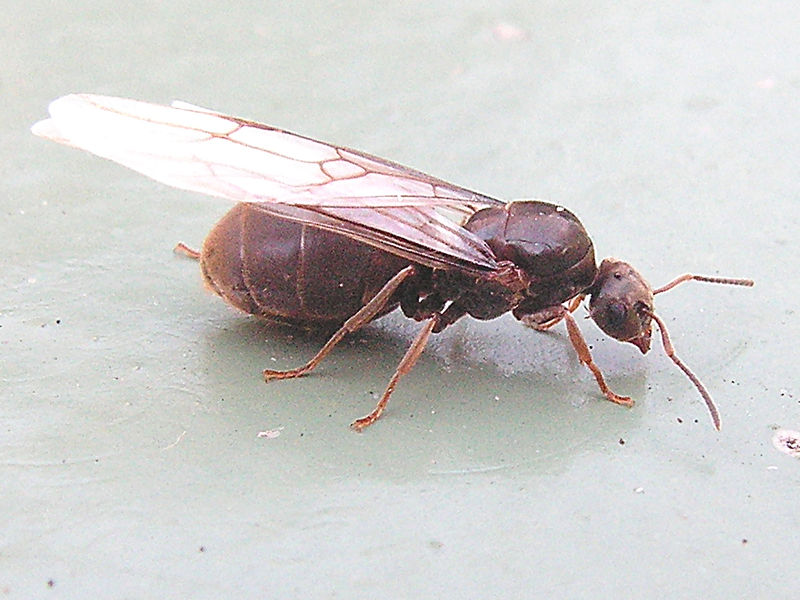 Ants leave phenomone trails that can be followed by other ants which are perceived with their long, thin mobile antennae. A threatened or injured ant emits an alarm phenemone that sends near by ants into an attack frenzy, which in turn attracts other ants. As any gardener will testify, if an ants nest is disturbed there will be literally hundreds of ants in an attacking mode within seconds.

Ants defend themselves by biting { and in some species by stinging} often injecting or spraying chemicals such as formic acid.. Ants are often associated with aphids. When aphids feed on plants they produce a sweet liquid " honeydew" which is a high energy food source for ants. Ants are said to " farm " aphids, offering them protection in return.