A look at Cresses.

The Field pennycress,Thalapsi arvense, belongs to the cabbage family Brassicaceae, within the order Brassicales. It is a foetid,hairless annual up to two feet {60 cm } in height and it takes its common name from the round flat,winged pods that have a deep apical notch.

The flowers are white and are borne in tightly packed terminal spikes. The petals are twice as long as the sepals. The leaves are narrow and arrow-shaped at the base where they clasp the stem. They flower from May to July.

It is an annual species which may be encountered in arable fields , especially in broad-leaved crops and mainly on heavier soils. However, it is also a frequent plant on disturbed roadsides and on waste places and gardens.

It is  a  species found in temperate Eurasia and has become naturalized in North America. It is widespread in the UK. In the USA Pennycress oil from the seeds is being developed as a renewable  fuel. It is also utilized as ruminant animal food in the form of 'Presscake' to read more  on this visit www.arvegenix.com/pennycress-products.html

This species belongs to the genus Arabis in the Brassica family within the order Brassicales. It is a plant widespread in the UK< but less common than the previous species. The specific name of hirsuta indicates hairy and the leaves and stems are unmistakably so. It is an erect plant from one to two feet {30-60 cm }  in height and found on limestone steps, dunes, hedge-banks, walls and rocks.

The lower leaves form a basal rosette, the stem leaves have no stalks and clasp the stem and are erect. The stem is long,slender and generally unbranched ,culminating in along spike of small white flowers with white petals that are not notched and twice as long as the sepals. The succeeding seed pods {fruits} are cylindrical, held erect and remain close to the stem. They contain reddish-brown seeds that are slightly winged. They may be encountered in flower from June-August.

Plants of the Arabis genus are available for the garden and these are a group of robust evergreen, mostly mat-forming perennials which make excellent ground cover for rock gardens. they are fully to frost hardy. they require full sun and well drained soil. they may be found at your local nursery/garden center , or online suppliers.

Thale cress Arabidopsis thaliana, is quite similar to the Hairy rockcress, however, the leaves do not clasp the stem. Indeed the leaves and seed pods slant away from the stem.

Hoary cress. lepidium draba is another troublesome arable plant species long associated with coastal areas, often encountered on dry stony places and is common along salted roadways. It is readily identified by masses of foamy, tiny, white flowers on its many branched stems. each individual flower has for petals and are replaced by heart-shaped fruits.

The toothed , greyish leaves on the stems are oblong and have no stalks, the lower basal  leaves may have no teeth. This perennial species grows between 30-80 cm high and flowers from May through June. Sea Kale is a somewhat similar looking plant but is much more robust often forming clumps on shingle beaches.

Despite the uncomplimentary common name of Swinecress there is little evidence that pigs eat this species, and the name could refer to the fact that it is a cress only fit for pigs.  Has the species name suggests, it is a low growing plant encountered along trampled pathways and gateways and on pastures particularly those that plat play host to cattle. and they are often found around cattle troughs.

The foliage tends to be prostrate that appear as a fan-like background to the flowers which are white  and borne in tight clusters. The petals are longer than the sepals. The fruit  {seed pods} have a wart-like surface. The stems are from 5-30 cm long and have widely spaced small,finely divided leaves.

The lesser Swinecress Coronupus didymus, has hairy stems, but more deeply notched fruit  which releases a strong smell when crushed. These plants are widespread in the south of England.

In some herbals and other reference books the plant is found under the scientific name of Nasturtium officinal, and is probably the most familiar of cresses to many people. It is readily available in supermarkets and grocery stores.

They have a glossy, succulent , edible leaves that grow in 'ladder' form along the fleshy stem. The leaves are divided into leaflets which often float along the surface of the water. They have a characteristic oval shape. The plant creeps along freshwater habitats,rooting at intervals in the mud. It is encountered along ditches,streams, ponds and other water bodies,sometimes forming large colonies.

They produce white flowers which have four petals borne in tight cluster.They flower from May until October,and when they occur  last for many weeks. The height of this plant can be from one to two and a half feet.{ 30-70 cm}. The flowers are replaced by long lender curved seed pods.

A similar looking plant is the Brooklime but this species produces small blue, forget-me-not,-like flowers. Another superficially similar species is the Fool's watercress, which has toothed leaves and is poisonous,hence the common name.

Alpine rockcress, is a flowering plant in the same family that grows in mountainous regions in areas of Europe, North and East Africa,central and eastern Asia and parts of North America. However, here in the UK it is only known to occur in a few locations in the Cuillin Range of the Ilse of Skye. It inhabits damp ,gravel and scree often on limestone .

The stems are up to sixteen inches {40 cm },the leaves in the basal rosette  are long, strongly toothed and stalked. The stem leaves clasp the stem. The flowers are white with four petals.

Hairy Bittercress, Cardamine hirsuta is a common garden weed. They have tiny white flowers which may easily overlooked. They are borne in tight clusters at the tips of the gradually lengthening stem, but are usually topped with long seed pods sprouting from beneath. The petals  are twice as long as the sepals.

The narrow hairy leaves are divided into well separated pairs of leaflets. height from  {5-30 cm} Two to twelve inches. They flower from February until November.

Wavy Bittercress Cardamine flexuosa,  Is a small flowering plant up to 30 cm {One foot} tall. It is a pernnial with a few short erect stems. The leaves are divided into leaflets,mostly at the base each leaf consisting of about five pairs of rounded leaflets.

The flowers are small and white with six stamens. The seed pods do not over-top the flowers,distinguishing it from the previous species. Common throughout  the UK in woody,shady and damp places. This is another common garden weed. 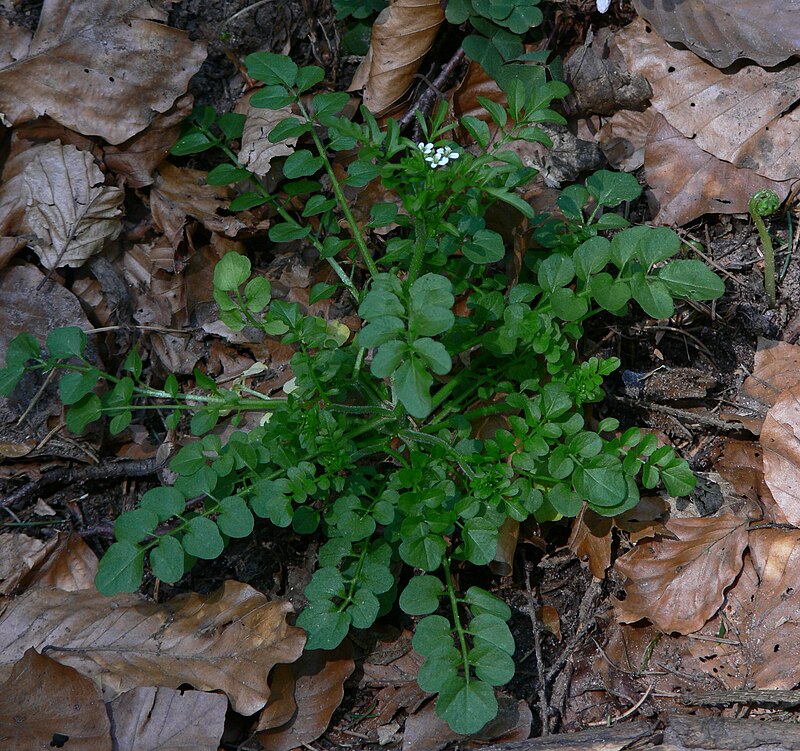 Associated pages. Click on the relevant content banner at the top of the page  scroll-down to view

All other flora featured on this site are grouped together in the content banners above. Click on the relevant content banner and scroll down to view.

Flora via links. Click on the Links banner at the top of the page and click on the relevant box. This is a direct link to the article{s}.

Flora via your search bar. Click on the relevant content banner at the top of this page. Scroll down to relevant shortened address. Type the address into your search bar. This is a direct link to the article{s}.