A Look at the Poppy family.

A look at the Poppy family.

Poppies are familiar flowers in many gardens and if they grow in your garden you have an opportunity to note the chief characteristics of the poppy family. As the flower buds appear it will be noticeable that each flower is covered by two large papery sepals. There are commonly four to six {or more} petals, which also tend to fall rather early in the plants development which are succeeded  by the capsule-like fruit in which the seeds are contained. All members of the family are herbacious plants and have a sap which is milky or coloured in appearance.

The group contains comparatively few of our wild flowers,although some of them are very beautiful.

A look at the Species.   Yellow horned Poppy. Glaucium flavum.

The Yellow Horned poppy takes the place, on the sea coast,of the red poppies inland. It is a halophyte {salt loving} and occurs around the whole coast of Britain, with the exception of a very few counties.

It grows on rocky coasts as well as in the flat eastern counties,forming beautiful clumps,usually on sandy soil. It is a very free flowering plant whose golden yellow flowers form a pleasing contrast  to the wide spreading leaves of a bluish-green colour. The crispy wavy leaves nearly clasp cover the robust, tall, branching stems, and gives the plant a cabbage-like habit,the stem is smooth the leaves stiffly hairy.

The long seed capsules  or pods can attain the length of up to nine inches,warted and rough and are curved. The seeds they contain are brown with ridges,enclosing squarish areas,and the lobe of the stigma spreading.  These pods referred to as silique release the ripe seeds by opening two valves at the top.

The large yellow poppy-like flowers are two to four inches across and distinctly characterize the plant. Each flower generally lasting for about two days. The petals form two opposite pairs, of which the inner ones are smaller than the outer ones. Numerous stamens surrounds the two,long celled ovary, the two stigmas expand just over the placentae,and are only fertilized by pollen from the same flower, for the stamens stand erect around the pistil,and form a more convenient landing stage for flying insects than the soft petals.

The stem is two to four feet high {60-120 cm}. They flower from June until October  and the plant may be annual or biennial.  The leaves, as commonly happens with seaside plants, are thickened and very handsomely cut and lobed. The blusih-green colour distinguishes many plants of the sea shore,which is commemorated the genus name of Glaucium.

The Welsh poppy, Meconopsis cambrica, has flowers almost as large as the previous species, but they are a pale sulphur yellow instead of a deep golden hue.The ovary is one celled,and the four to six stigmas form a radiating head to the distinct style. The fruit is a more oval capsule,and opens just below the style by as many little valves as there are stamens.

This species is endemic to upland regions of western Europe, in the UK it is found in Wales,parts of southwestern England and a few parts of Ireland. However, it is extensively grown as a garden plant, from where it escapes to become naturalized in many regions. It flowers from May until late summer. 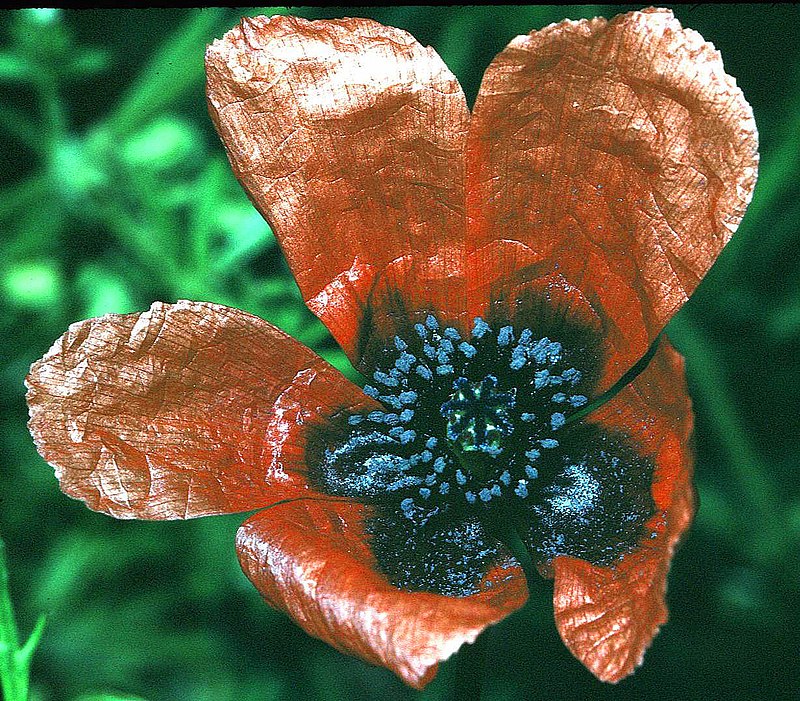 The smallest of the red poppies is Papvar argemone, often referred to as the Long prickly headed poppy or the Pale poppy, whose petals are small and narrow, so that the flower does not resemble the Yellow Horned poppy in its fullness or cup shape, but forms a cross of petals with greater space between each of them.

It grows in dry waste places,on the tops of banks and walls,and its weak,pale appearance would give the one the impression that it is merely a specimen of the common Poppy of the corn fields, poverty stricken owing to the seeds having fallen on stony ground, but there are several small differences. However you would need to be a fully trained botanist to discover them all and note any detail, but there two of the differences which more notable.

The anther filaments of this species become stouter upwards and the seed vessel is club shaped, bristly with a somewhat conical roof, on which form four to six stigmatic rays will be seen. If this seed vessel is cut across, it will reveal that it is divided into a large number of compartments by the outgrowth of plate-like placentae,from the walls of the capsule, and each of these compartments opens by a little window under the eaves of the stigmatic roof. They are closed until the seeds ripen, then the little valve shrinks away from the stigma, and the wind sways the long slender stalk, the numerous and minute round seeds are shaken out. 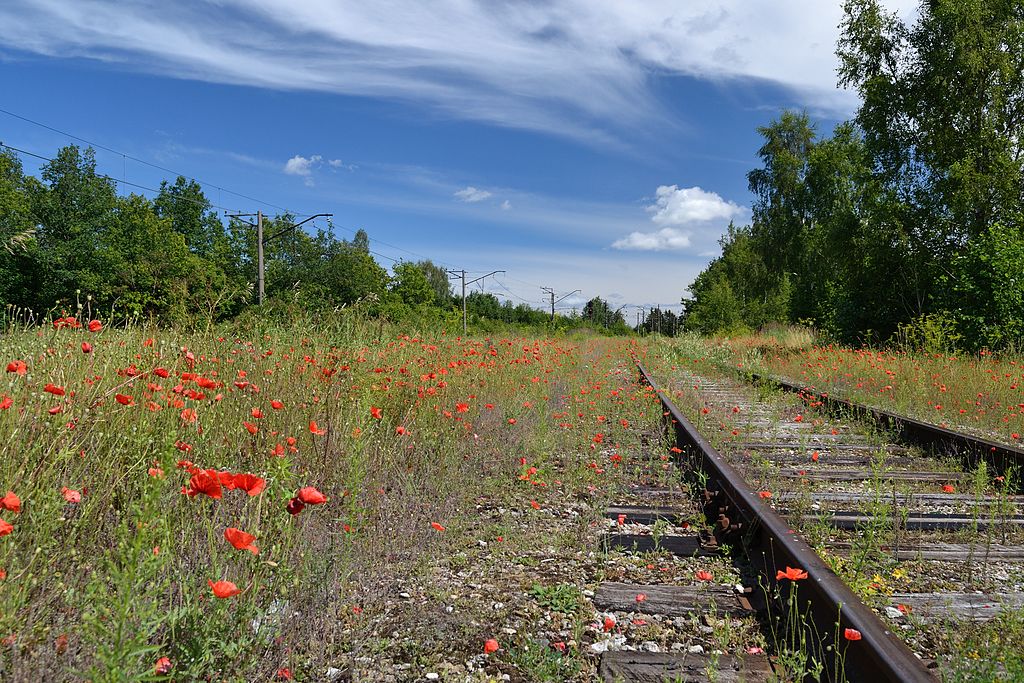 There is another species with a capsule of a similar shape to the previous species, the long smooth headed poppy, Papavar dubium.  But in this species the filaments of the stamens are thin and thread-like throughout their length, the petals are broad,and the capsule is not bristly, and there are from six to twelve stigmatic rays on the roof.

Papavar hybridum, has small flowers, but larger than the Prickly Long-headed, though its stamen filaments are similar, and the capsule bristly, but the capsule is globular and the rays number four to eight.

Seed capsule of Papavar hybridum is round not elongated like those of the Long and Smooth headed poppies.

The Common poppy,Papavar rhoeas differs from all other poppies in the size of its petals, the two outer ones being so large that until the flower is fully expanded they enclose the smaller pair. The short round capsule which is quite smooth and further distinguished from  the rough round headed poppy by its eight to twelve rays, and by being slightly elevated above the receptacle by a little stalk.

Because of the character of the open flowers they do not seem to be specialized for fertilization by any particular family of insects, they are visited by beetles,flies and bees indiscriminately.

See header image above for the plant in flower.

There are many garden varieties available to the gardener. One of the most popular is the Californian poppy which has yellow or orange flowers generally and bullet shaped seed capsules which can be seen in the photograph below.

All other flora that occurs on this site are grouped together in the content banners above.

Flora via links. Click on the links banner at the top of this page. Scroll down to relevant box. Click this is a direct link to the article. Other species of Poppy may be found here.