The common chickweed belongs to the Family Caryophyllaceae {pinks} in the Order Caryophyllales and placed in the genus Stellaria { Latin meaning little star } and alludes to the flower formation.

It is widely distributed on all types of soil, but it is more abundant on lighter soils and much less so on acidic soils. It thrives on cultivated areas and tends to decline when the soil is not cultivated for a long period. It is known to be sensitive to drought and is one of the first species to wilt in dry conditions. It also occurs on roadsides, shingle, riverbanks,coastal cliffs and of course gardens and allotments, where it can become an annoying weed.

It is a very variable plant in size, growth and general appearance depending on growing conditions and possibly due to genetic causes. Chickweed plays an important source of food for farmland birds.

The stem of this species is procumbent and weak, much branched, which may reach 40+ inches length, tends to trail along the ground, the stems are juicy, pale green and slightly swollen at the joints.

The spreading stems that may root at the nodes, and any stems broken off {as by hoeing} will root again in the moist soil. Chickweed is readily distinguishable from other species of this genus by the line of hairs that run up the stem on one side only, which, when it reaches a pair of leaves is continued on the opposite side. these lines of hairs may be seen very clearly under a magnifying glass {hand lens };

The leaves are somewhat succulent, egg-shaped or oval terminating in a small point. The leaf margin is untoothed.  the individual leaves are about 1 cm {half an inch} long. They are arranged along the stem in opposite pairs.

The small white star shaped flowers are situated simply in the axils of the upper leaves. Their petals are white and deeply notched, so much so, that they appear to have 10 petals. the petals are no longer than the sepals. The individual flowers are 8-10 mm wide. The flowers open about 9,0,clock in the morning and are said to stay open for 12 hours, providing the light is strong enough , however, if the weather is dull or it is raining the flowers will remain closed. Heavy rain will cause the flowers to droop but this is only a temporary affair and they soon rise up again to face the sun.

The seeds are held in little capsules fitted with sharp teeth, which close up in wet weather, but when the tiny seeds  are ripe the capsule splits into six segments. Studies have revealed that each capsule holds about 10 seeds. The average number of seeds per plant is about 2,200-2,700. However, plants with 25,000 seeds have been recorded.

Chickweed can complete its life cycle in 5-6 weeks. Chaffinches are one of the many birds that feed on the seed. Buried seeds can remain viable for at least 25 years, possibly up to 40. Ants are known to carry the seeds that aid distribution. 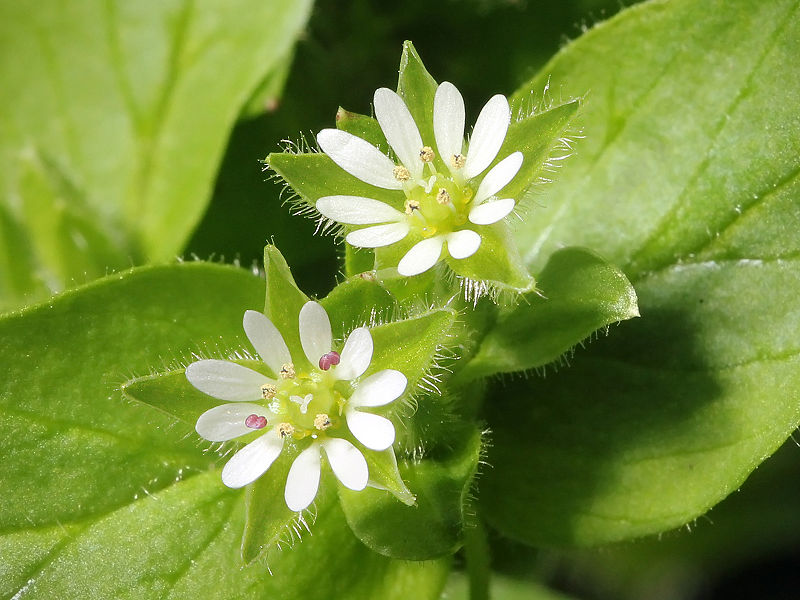 " Sleep of Plants" this refers to the fact that every night  the leaves approach each other, so that their upper surfaces fold over the tender buds of the new shoots. the uppermost pair of leaves but one, ate the end of the stalk, have longer leaf stalks than the others, so that they can close upon the terminating pair and protect the tips of the shoot.

" Chickweed whose stars are not disclosed till 9.15am

when they display themselves for exactly twelve hours"

Here we review historical works of past writers on the subject of the chickweed; the first from Salmons Herbal {1710} where the Latin name for the species was Alfine minor. " Its virtues---The juice is very cooling and emollient without any binding property;Galen and others say that it has the virtues of " Pellitory of the wall", but that I doubt, however, it is commonly found to be as effectual as purslain to all purposes wherunto it serves, except for meat and salleting only.

" applied with cloths or sponges dipped therein, to the region of the liver, and as they dry , to have fresh applied, does wonderfully attemperate the heat of the liver. it is good for all redness of the eyes, being dropped into them, also put in the ears warm, it eases their pain proceeding from a hot cause. The piles bathed or fomented therein, it abaits their pain and takes away the heat and sharpness. It is good made into an ointment with lard."

Next from the Useful Family Herbal  1755-- Where it is  known as Alsine media " The commonest of all weeds, but not without its virtues. The right sort to use in medicine {for there are several of these}  is that  which grows so common in our garden beds. The whole plant, cut to pieces, and boiled in lard till it is crisp, converts the lard into a fine green cooling ointment; the juice taken inwardly is good against scurvy."

In the book Adam in Eden {1657} Coles, wrote " In the catalogue of British Plants { that at the time } listed 20 sorts of chickweed, these include Greater water chickweed, Berry bearing chickweed, Ivy chickweed or small henbit, The least chickweed, Round leaved chickweed, Great henbit chickweed, Upright chickweed with jagged leaves, Fountaine chickweed, and Germander chickweed." Most of these have now been reclassified.

He continues " As those herbs hitherto appropriated to the liver, are for the most part to be used inwardly, to chickweed may be applyed outwardly to the region of the liver, the herb doth cool it wonderfully. the decoction also taken inwardly cooleth and tempereth the blood inflammed in auges, the heat of the stomack and liver breaking out in lips, procureth appetite being soft or brcome waekeid used in hettick feverours, and assuageth heat of the back and urine.

" It is effectual also for the jaundice if it be stopped and strained into stale ale or white wine, and dranke first and last for five days together. The leaves boiled with marsh mallow rootes in water, till they be soft adding thereunto some hogs grease, powder of fenugreke and linseed, do make a very good pultis  to be applyed to swellings or impostumes for ripening and breaking them, to take away swellings of the legges or any part to ease members that are shrunke up, to comfort wounds in sinewy places defend foule malignant and virulent ulcers from inflammation during thecure and to dissolve those swellings that will not willingly be digested or come to supporation"

Around the same period of time Nicholas Culpeper in his " Complete Herbal" stated " It is a fine, soft pleasing herb under the dominion of the moon. It is effectual as purslain in all its applications except for meat; it is used also in hot and virulent ulcers and sores in the privy parts of man and woman or in the legs or elsewhere.

" Boil a handful of chickweed and a handful of red rose leaves dried in a quart of Muscadine until a fourth part be consumed, then put them in a paint of neat foot oil. let them boil a good while, stirring them well, which  being strained, anoint the grieved parts therein warm against the fire, rubbing it well with one hand; and bind also some of the herb to the place and it will cure it in three dressings"

And finally in this historic evidence, From the Book " Weeds and Wild flowers"  by  Lady Caroline Catherine Wilkinson {1858}  " Stellaria media, or common chickweed, regardless alike of heat and cold, sunshine and storm and sows seeds the whole year through is a most excellent and wholesome vegetable which when boiled, can scarcely be distinguished from spinach."

Chickweed is considered as good against boils, conjunctivitis, eczma, psoriasis, anaemia, chicken pox and shingles and cystitis. Internally taken for coughs, externally as a wash for wounds, rashes and sores.

An infusion may be produced by infusing 2 teaspoons of the herb in boiling water for 5-10 mins. Strain the liquid off and take two cups daily-warm.

The juice of the fresh leaves in a little water may be used as a skin lotion or wash for dry skin.

In homeopathy it is used to treat rheumatism or arthritis and bronchitis.

The active ingredients include Saponin, Vitamins A,B, and C. Calcium and potassium.

It is regarded as a demulcent and refrigerant. It was and still is held in great repute among herbalists, used mostly in the form of an ointment.

Anyone that is considering trying herbal preparations for the first time is well advised to click on Wild Herb Advise  in the content banners on the right hand side of this page.

FOR THE FORAGER--Chickweed is one of a very few edible species that may be encountered during the winter. The soft green leaves may be added to salads. During the summer months  the foliage can become a little tougher but these can be steamed or cooked in a knob of butter as can the stems. or they may be put into a saucepan with chopped spring onions and simmered gently for about 10 minutes. Turn them all the time during this simmering process.

The images on this [page may be reused. However, the name of the author must be attributed along with any accompanying license.

Associated pages. Click on the content banners at the top of this page. Scroll down to view.

Nettles for food and medicine.

Flora via links. Click on the links banner at the top of this page. Scroll down to the relevant box. Click, this is a direct link to the article. Includes the series Past and Present Medicinal Uses.