Peas and Clovers a look at the family.Part-1. Including basic biology. 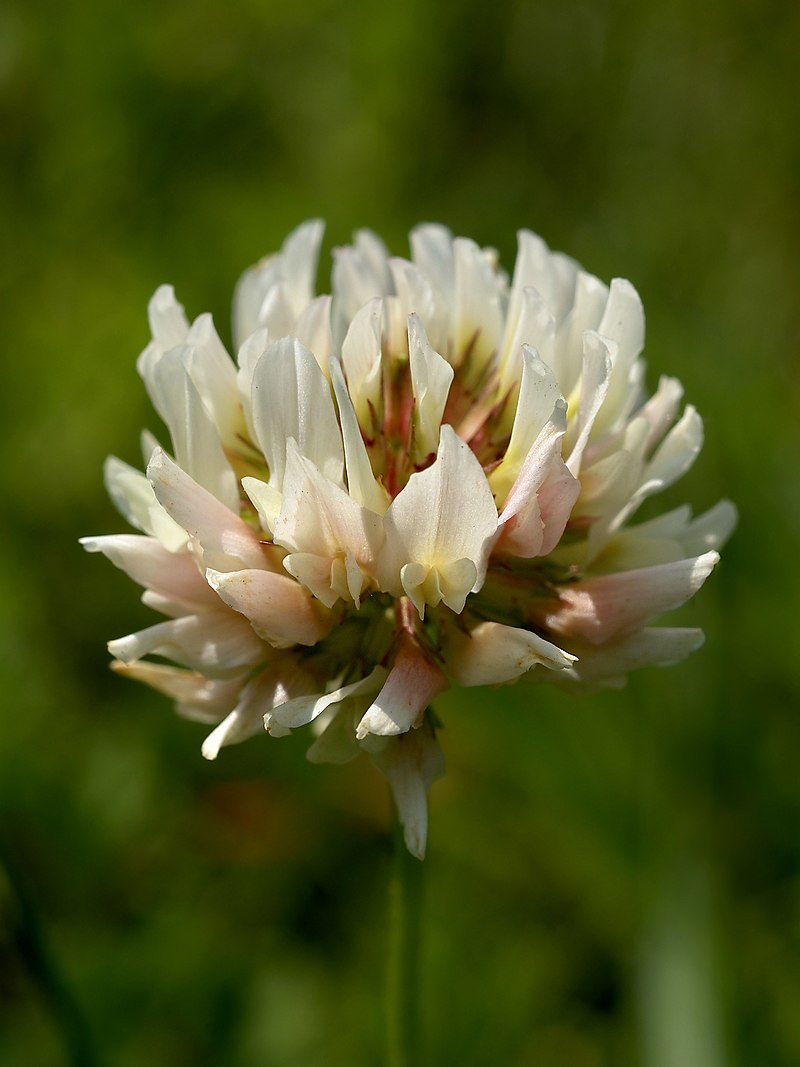 Many species of this family are familiar to most people, the beautiful Sweet-pea of the garden, Gorse and Broom on wasteland and heath, to the vetches of the hedgerow. Just some of the 5,000 species in this important flowering family are found to be native to the UK.

This family of plants are known to gain nitrogen from the atmosphere which is then stored in nodules on the roots. This helps to keep the plants lush and green and also spread the nitrogen into the surrounding soil.  It was not fully understood why this occurs and caused debate among botanists and other authorities. To illustrate this point I refer to the Book 'Romance of flowers',published in 1899 and written by Edward Step, courtesy of the Biodiversity Heritage Library.

Mr Step writes, " The question whence this great quantity of nitrogen was derived was a long a problem to agricultural chemists, for it was found from the valuable experiments of Lawes and Gilbert at Rothamsted, that whilst in most crops the nitrogen they tield can be accounted for by the amount of manure supplied to the land, with the addition of that contained in rain water, when it came to the analysis of Peas,Beans,Clovers, Vetches etc, an excess of nitrogen was found that could not be accounted for in this manner. The only explanation that occurs is that the free nitrogen existing in the atmosphere is laid hold of and assimilated by the growing plant, but experimental botanists of high authority have been agreed that the plant has not this power, that though nitrogen enters freely into the air-space in the leaves of the plant can not avail itself of this element,it can only extract it by the root action from the soil in the form of ammonia and Nitric acid.

Nitrogen fixing nodules on the roots of clover.

Mr Step continues " One of the most striking of the recent discoveries concerning the micro-organisms was the discovery of bacteria capable of living in the soil utterly devoid of all animal and vegetable matter, and by their feeding upon the purely mineral constituents of the soil,and passing them through their bodies to give such a degree of fertility to the soil that green plants can sustain life from it."

" But what, you may ask.has all this got to do with Peas and Clovers ? Everything;peas and clovers could not provide the animal world with their valuable flesh forming seeds.but for the nitrifying bacteria-neither, indeed,could any of the ordinary crops be produced. Most people have grown the Scarlet Runner bean,and have pulled up the roots,after the frosts have cut down the stems, have noticed that these roots are all distorted and gouty in appearance. Similar nodules are found on the roots of Sainfoin,Clover,etc; and it is now known that these nodules contain a great deal of nitrogen and swarm with bacteria. This explanation then of Leguminous plants containing more nitrogen than was in the soil appears to be that they take nitrogen from the atmosphere and convey it to the roots,where the action of the bacteria converts it into such form {nitric acid} that the plant can assimilate it. It appears probable that each type or genus of Leguminous plants has its own specialized bacteria"

Courtesy of Sannse at English Wikipedia  CC BY -SA 3.0 License

The leaves stems and flowers.

Having briefly looked at the previous remarkable character of this group we now look at the stems ,leaves and flowers. One of the most widely distributed of our {UK} native peas is the Meadow Vetchling {pictured above}, Lathyrus pratensis, a very pretty plant with yellow flowers that may be found in hedge or copse,and indeed on meadows throughout most of the country. From the creeping rootstock several weak stems arise which have the appearance of being very leafy,but one half of the apparent leaves are really enlarged stipules.

The true leaves have been broken up into a pair of leaflets,and between these and the leaf stalk is continued for some distance and probably branches into several very slender tendrils which curl tightly around the stems and leaf stalks of neighbouring plants.

In the peas and vetches all kinds of variations in the leaflets and the tendrils can be found,with enlargements of the stipules to make them serve as leaves where these have been converted into tendrils. In this species it will be noted that the stipules are very large and conspicuous, and of the shape known as 'arrow-head',  due to their prolongation backwards into a couple of slender ears.

From the axil of the leaves a cluster of bright yellow flowers,varying in number from three to twelve,are borne upon a long stalk, and each of these consists of a five toothed tubular calyx and five petals.  The parts of these and other pea flowers have petals that are so different in form and shape that they have been given distinguishing names.

Flower of the Honey pea taken in Hong Kong,China.

Parts of a Pea flower.

The upper most of the five petals is very much larger than the others,and it is called the standard. In the unopened flower it embraces and protects the smaller petals. The small size of the calyx lobes make it very useful for this purpose. In the extended blossom it is the most conspicuous feature. Then there are two side petals known as wings and lastly there are two that occupy the central line of the flower and these are joined by their lower edges,and collectively referred to as the Keel, because they have something of a boat shape in their united condition.

There are no less than 10 stamens,and nine of these are united  at the basal parts of the filaments to form a tube,within which lies the pistil. The reason for the tenth stamen being free is that a gap is left on the upper side of the tube so that bees can get their long tongues through to the honey which is secreted by the inner wall of the tube.

On each side of the Keel near its base there is a little swelling corresponding with a depression in each of the wings,so that the whole interlock. The anthers shed their pollen before the stigma is mature and it lies in the point of the Keel.When a bee alights upon the Wings,its weight depresses them,and they bend the Keel in such a manner that the curved pistil is pressed out at the tip of the Keel,and the hairs with which its inner face is covered,sweeps the pollen against the bees abdomen. When the weight of the bee is removed the organs resume their former positions.

Then if the bee visits a slightly older flower , the stigma will be pushed out against the bees abdomen  and receives some of the pollen grains from the first flower. Thus fertilized, the long flat ovary one carpel develops into a one celled legume {pod} which is characteristic of this family. The form of the flower described above is found with slight modifications to prevail throughout the whole family that is as far as our native genera are concerned.

A look at the Species.

There are some noteworthy variations in the matter of the leaflets,some species  having a great number whilst others they are fewer or absent altogether.

The Grass vetchling, Lathyrus nissolia, in the case of this species it has neither leaflets,leaves or tendrils. It is true it possesses leaf stalks,and it has to make the most of these by flattening them out until they somewhat resemble the blades of grass and use them as leaves. The stems of the plant are very slender and the crimson flowers solitary. The plant has evolved to living among grass almost unnoticed until the flowers arrive. This species is fully capable of self-fertilization and some of the flower buds never fully expand.

Narrow everlasting pea,Lathyrus sylvestris, has two long narrow leaflets,sickle -shaped stipules and branching tendrils,throughout its length the stem has a flat expansion or wing on each side.

The general arrangements of the family are repeated in the vetches of the genus Vicia,their habits too,are much the same, most species growing in fields and hedges,though some like the Wood vetch,as its common name suggests grows in rocky woods.

The Sainfoin which is usually only found as an escape from cultivation {in the UK},is an erect growing perennial,with large leaves as much as six inches {15 cm} in length,and divided into as many as twelve pairs of leaflets. its compact erect arrangement of rosy flowers are very ornamental and prove attractive to bees,not only for that reason but also because they are well provided with honey,the road to which is indicated by a number of crimson lines drawn down the standard. { clearly visible in the image above}.

Although striking in appearance the flowers of the Sainfoin are all defective,in the sense that the wings are in a minute undeveloped state. In this species the pod is curiously semi-circular,downy and netted and contains only one seed.

The pods produced by the Sainfoin are not,however, as curious as those produced by the Horseshoe vetch,which is flat and somewhat serpentine with the upper margin notched. When ripe this quaint pod breaks at the notches into three to six horse-shoe-shaped joints,each containing a single seed. The foliage is similar to those of the Sainfoin,though with fewer leaflets,and the yellow flowers have a general resemblance to the more plentiful Bird's-foot trefoil {Lotus corniculatus}  whose seed pods resemble the claws of a birds foot. This species must not be confused with the Bird'sfoot {Ornithopus  perpusillus },whose seed pods form  parts that look like the scale-covered toes of a bird.

The flowers of the much commoner and more widespread Bird's foot trefoil are yellow and often tinged with red and the leaflets appear to be in threes hence the name of trefoil,however, there is actually five the other two being placed where the stem meets the stalk. From three to ten flower-heads are borne at the end of the flower stalk individual flowers have very short stalks. They form a head or capitate cyme to express a botanical term for the same thing.

Associated pages.Click on the relevant content box at the top of the page. Scroll down to view.

All species of flora that are featured on this site are grouped together in the content boxes at the top of this page.

Flora via Links. Click on the Links content box at the top of the page. Scroll down to relevant box click this is a direct link to the article { Images /descriptions/uses.}

Flora via your search bar.  Click on the relevant content banner at the top of the page. Scroll down to relevant subject. Type the shortened address into your search bar. This is a direct link to the article {Description /images/uses.