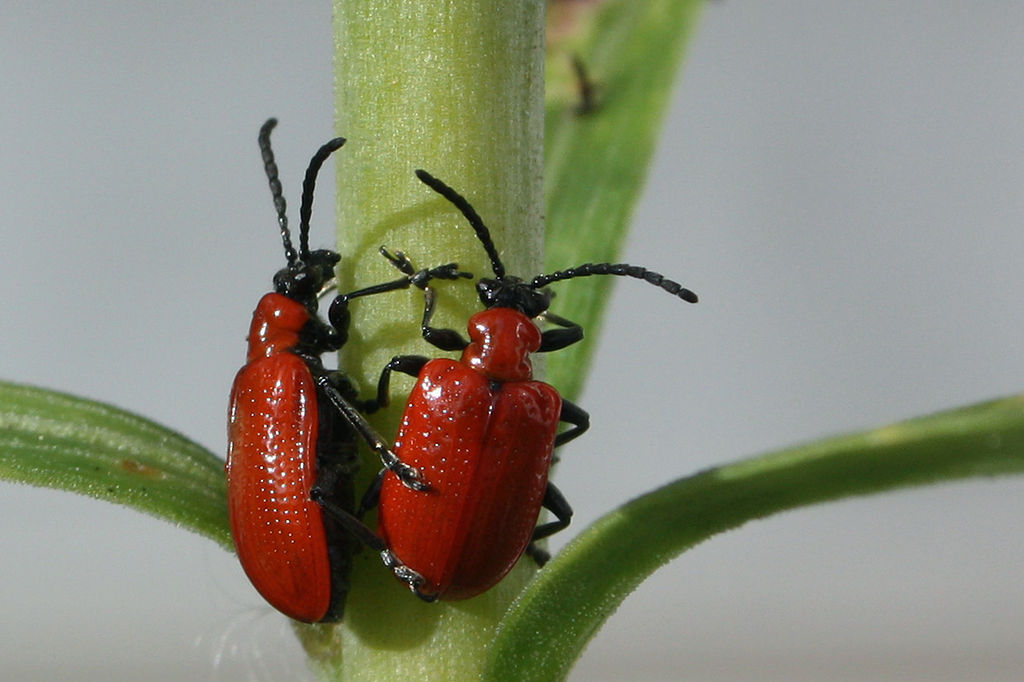 What are leaf beetles ?

Worldwide, leaf beetles, have an estimated 40,000 species which are placed in over 2,500 genera. They are diverse and one of the most encountered type of beetle. In the UK there are nearly 300 species.

They are all closely associated with plants and trees on which they feed, other parts, as well as the leaves. May of them are serious crop pests. They have biting mouth parts and forewings that are hardened  to form wing cases known as elytra, which cover the abdomen when viewed from above. 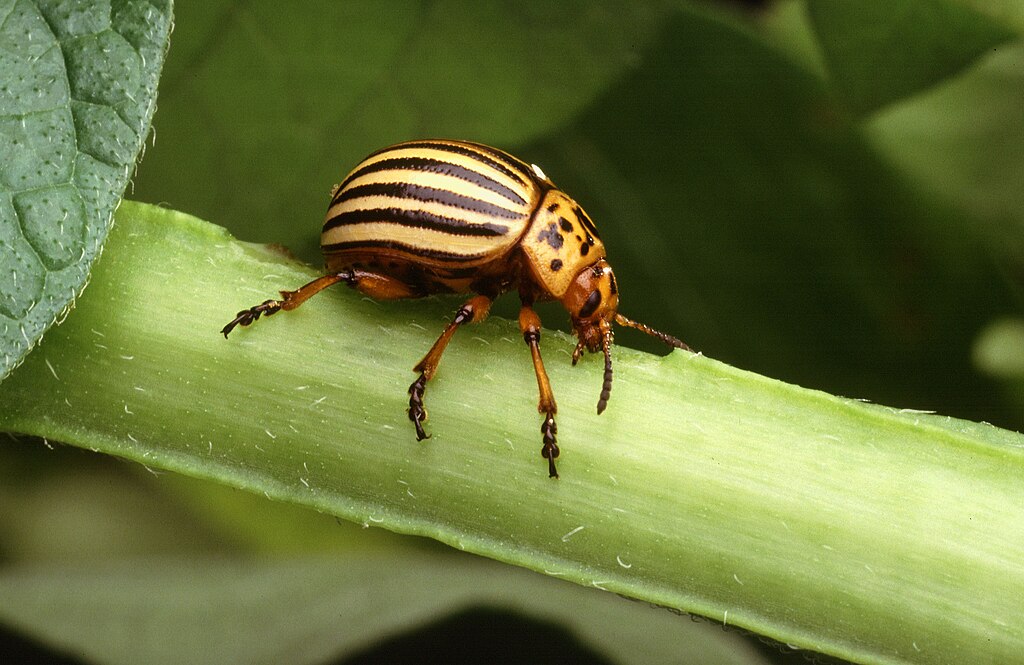 Because many species are exposed on the surface of the leaf on which they feed they are particularly vulnerable to  predators at all four stages of their life cycle. Eggs are taken by ants and other creatures. The larva and pupa are often targeted by spiders, true bugs and even ladybirds. Parasitic wasps attack juveniles. Adults have some defense, especially chemical defenses, against many predators as we shall see in the review of individual species. 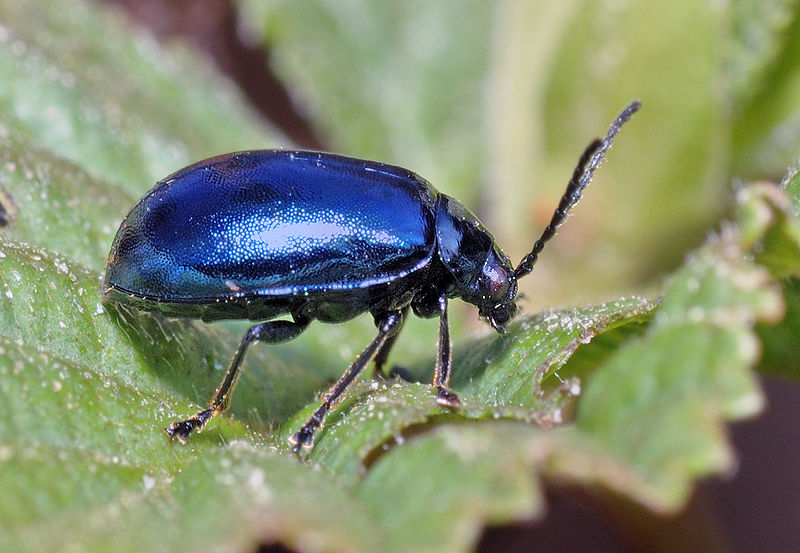 The Alder leaf beetle {pictured above } is 0.2 inches {7.1mm} is a member of the Chrysomelidae and placed in the genus Agelastica and is a black or blue black colour. It was once regarded as being extinct in the UK but is making a comeback after an absence of over 60 years. It is particularly prevalent in my neck of the woods in North West England.

This beetle has its name suggests feeds on the leaves of Alder trees but may also be found on downy birch, hazel and goat willow.  They have even been known to eat the leaves of fruit trees such as apple and pear, although records of this in the UK are few. Larvae feed on the leaves and pupation takes place below ground.

Larva of the Alder leaf beetle.

The length of this metallic green beetle varies depending on the sexes the males being 4 mm long and the female 7 mm long.  Both sexes are green but depending on the light may appear bluish,violet or even red. The antennae are serrated and of a medium length.

It seems to be more numerous in the west of England and feeds as its name suggests on the foliage of Dock and Sorrel. They have been known to feed on other plants such as Brassica , however, the larva can only fully develop when they feed on dock and other Rumex foliage.

It is found on heathland, forests, meadows and gardens where the food plant occurs.

This species commences its life cycle when they begin to breed in March through to October depending on location and conditions. They produce two to four broods per season. The last brood hibernates as adults.The female lays small clusters of eggs {see image above} and may lay up to a thousand eggs in total. They are placed on the underside of the leaves of the food plant.They are oval and of a cream or yellow colouring. They tend to turn orange just prior to hatching. This takes three to six days from being laid.The larva hatching from the eggs are of a greenish grey to dark brown colour. Up to 8 mm long the body is segmented.

Larva may drop to the ground if disturbed while feeding. After three instars the larva pupate in the ground making a small burrow about 2 cm deep.The adult emerges in about nine days

This leaf beetle is a widespread species in England and Wales but mainly coastal in the west. It is 2-3 mm long and the basic colouring is yellow as are the legs. They prefer mainly open habitat where they feed on a variety of plants. The larva will also feed on buds. It is thought to feed on Sheep's sorrel.

This species will be familiar to many gardeners where lilies are grown. they eat nearly all the above ground parts of the lily plant, including the buds. Other favoured plants of the lily family are the Fritillary. They are a serious pest of this family of plants.

They belong to the order of beetles known as the Coleoptera and the family Chrysomelidae within that order.  The adult is 6-9 mm long {just over a quarter of an inch} They have relatively long legs and antennae. The elytra is bright red/scarlet and shining. The legs , head and underside are black.

This species is sometimes confused with the Cardinal beetle The wing cases of the former are more rounded than those of the latter and have much more of a shine. The former also eats vegetation while the latter preys on insects.

This beetle overwinters in the soil and emerges again in spring. Soon after emerging to find food they commence mating. The adults are usually encountered in cool, moist locations. The eggs are produced in batches of about twelve with a total of 450 eggs laid by each female in a season. They are placed on the underside of the leaves. The female will arrange them in irregular lines along the midrib. They are of a red -orange colour . The larvae which hatch in about one to two weeks are  yellow, brown or orange.

The larvae can do much damage feeding on the underside of the leaves before working up the plant they commence this climb where the leaf meets the stem.They will continue to feed for up to 24 days before falling to the ground and burrow below the surface to pupate,  They make a cocoon made from soil bound with saliva.

They emerge as adults in a further  20-24 days and feed until winter. More than one brood may be raised in a season.

The first evidence of the beetle occurring  are sticky brown Frass piles { refers loosely in this case to the more or less solid excreta of insects} which contain the larvae on the leaves. The Frass gives them some protection from the sun and from predators. However, the Frass does not protect them from parasitic wasps, indeed, it may make them easier to find for the wasps.

The adult when danger threatens uses a defense mechanism known as thanatotis becoming completely immobile  or playing dead. It turns over with its black underside facing upwards. This gives it some camouflage against the soil. It is also capable of making a 'squeaking' noise by rubbing two parts of the body together. This startles predators such as birds and allows some chance for the beetle to escape.

On this page we have just touched upon the 'tip of the iceberg' as regards leaf beetles but hopefully given an insight to these fascinating creatures.  For leaf beetles in the UK there is an excellent book by Dave Hubble which can be obtained from Pelagic Publishing. www.pelagicpublishing.com