Agrimony belongs to the Rose family of plants Rosaceae and to the Order Rosales within the Rosaceae they are placed in the genus Agrimonia. It is a genus of 12-15 species of perennial, herbaceous flowering plants. The species under review here is the common agrimony-Agrimonia eupatoria, also referred to as Church steeples, and the more archaic titles of-cocklebur,sticklewort and philanthropus.

Description of the common agrimony.

From the large black root stock , which is perennial in nature and somewhat woody, rise up cylindrical, erect and somewhat rough stems, attaining the height of 30-60 cm { 1-2 feet} and many specimens often exceed this growing to the height of 50-100 cm {3 feet + }

In the larger specimens they may be slightly branched near the top, while the averaged sized plants are rarely branched. The leaves are numerous and have a salient outline with the lowest leaves reaching seven and a half centimetres {3 inches} long. They are divided along the midrib into pairs of leaflets. The leaflets graduate in size along the the midrib. The upper leaves have far fewer leaflets than the lower ones on the larger leaves, and, they are much less cut into segments with a simpler outline.

There are 6-8 large lateral leaflets and a terminal one on the larger leaves. Closer observation will reveal there are many smaller leaflets nestled between them at intervals. The main leaflets increase in size towards the apex of the leaf where they are two and a half centimetres { One to one and a half inches} long. They are oblong oval in shape, toothed, downy above and more densely so below.

The flowers, though small are numerous, Arranged closely on slender, terminal spikes, which lengthen much when the blossoms have withered and all the seed vessels are maturing. At the base of  each flower, which is placed stalkless on a long spike, is a small bract, cut into 3 acute segments. The flowers are 5-8mm wide, and have 5 conspicuous and yellow spreading petals which are egg shaped and somewhat narrow in proportion to their length, slightly notched at the end.

The stamens are 5 to 12 in number. The flowers face boldly outwards towards the light, but after they have withered the calyx points downwards and becomes rather woody, thickly covered by a mass of small bristly hairs, that spread and develop into a bur like form. Its sides are furrowed and nearly straight and surmounted by an enlarged ring armed with spines of which the outer ones are shorter and spreading the inner ones long and erect.

The whole plant is deep green and covered with soft hairs and they produce a slight aromatic scent. The root is also sweet scented and especially so in spring. The scent of the flowers is said to be reminiscent of the scent of apricot.

Agrimony plants can vary , as previously mentioned some specimens are much larger than others, some have more hairs than others and other minor differences. It has therefore, been placed by some botanists into two species in the past, however, in these modern times this practice is seldom maintained. The larger varieties having been named as A. odorata it supposedly having a stronger fragrance. Agrimony flowers from June -August.

In this section we review the writings of eminent authors on the subject of herbs in their own times, to get a perception of archaic medicinal and culinary uses of the plant down the centuries. beginning with extracts from the book -Of the Historie of Plantes- by the herbalist John Gerard [1636} where the plant is referred to as egrimonie---" it is hot and doth moderately bind---the decoction of the leaves of egrimonie is good for them that have naughty livers and kidnies. The herb being drunke in wine {as Pliny affirmeth} doth help the body flux.

Dioscorides addeth, that it is a remedy for them that have bad litters, and for such that are bitten by serpents. The leaves being stamped with old swines' grease, and applied to closed ulcers that be hardly healed.Egrimonie boiled in wine and drunke helps inverterate hepaticke fluxes in old poeple"

Next are extracts from Salmons Herbal- 1710--it states of the dried leaves and tops--" They are hepatick, and are good against any inward weakness of the bowels and are kept mostly to make infusions and decoctions, wines etc. the syrup is an excellent pectoral good against coughs, colds asthmas', where wheezing and most distempers of the breast and lungs and is commended against the rickets in children, dose morning noon and night. The juice,liquid--it powerfully opens obstructions of all the viscela and as all the virtues  of the essence. the liquid may be given in a glass of wine. The essences of the whole plant--they are approved goos against putrefication of the blood, obstructions of the liver and spleen and other viceera against the yellow and black jaundice and dropsies { by strengthening the bowel and parts affected after purges and diureticks} inward wounds and bruises, bitings of serpents or other venemous creatures."

Next we move on to the 19th century and view extracts from the book Weeds and Wild Flowers- by Lady Catherine Caroline Wilkinson 1858. " It is gathered with great assiduity by the village herbalist for the various uses to which it was formerly applied are by no means forgotten. the modern name of liverwort which is applied to it, takes us back to the days when Galen asserted its virtues as a strengthener of that particular portion of the human body. It is still applied by country people, to ulcerated sores as it was in the time of Dioscorides, though I am not aware that it is now considered good, against the bites of serpents, as he affirms it to be., though whether this signifies any particular species, or whether it means the plant in a green state, I can not tell"

" The following however, are the various maladies to which we know it to be familiarly applied. fevers, asthma, relaxation of the bronchial glands, cutaneous eruptions, weakness of the stomach for which as well as for jaundice, it is probably not without beneficial effect; agues, inflammations of the mouth and haemorrhages, for the stoppage of which the genuine old formula is of rather appalling character to be adopted in the 19th century consisting as it does of agrimony, pounded frogs and human blood. Yet those that know it best, tell us that though slightly tonic, its remedial powers are very limited on which account { though I still believe, that it is included in the London Pharmicpoeia} it is not now employed by the medical profession. For my own part, though I am only speaking experimentally on the subject, having been , in childhood, favoured with very considerable quantities of never-to-be-forgotten agrimony tea, I can only hint that I am not at all concious of being either the better or worse for it, though I should have been very unwilling to hurt the feelings of my good old nurse, under whose juristiction it was administered, by affirming this.2

" The usual mode, against old women learned in such matters, of preparing this tea, is by infusion of the crown of the root, sweetened with honey, but another favourite one is boiling the leaves in whey, this mixture being usually given as a cooling diet drink, in the spring time. When dried for winter use, any part of the plant appears to be indifferently applied to its various purposes in the form of  a powder, while Blanchard in his Physical Dictionary in which he observed, the Physcians is used in the sense of relating to physic-recommends that the leaves should be infused in beer or ale"

The burr -like seed heads stick to passing animals. 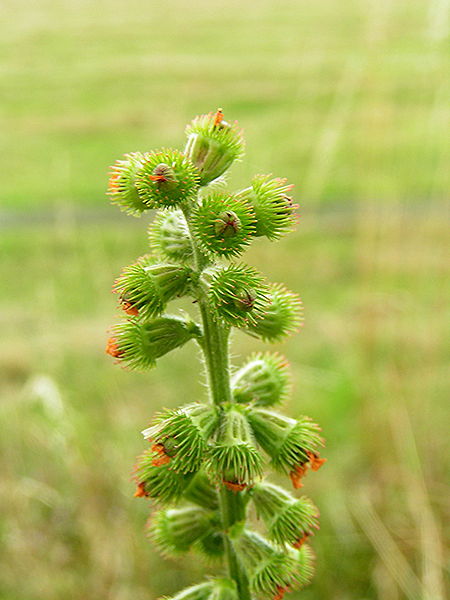 In these more enlightened times herbalists use agrimony to treat complaints of the stomach, intestines, liver and gall bladder. extracts of agrimony is thought to inhibit certain bacteria and viruses.The active ingredients include tannins, bitters and essential oils.

The whole plant is gathered from July to September. For home use, an infusion can be made to alleviate throat infections. Two spoonfuls of herb is infused with 250 ml of boiling water. leave to infuse for 10 minutes. gargle with it several times a day. It may also be used to produce a wine which was said to be good for upset stomachs.

Anyone using herbs for the first time in either medicinal or for culinary purposes is well advised to click on the page Wild Herb Advise. This can be viewed by clicking on the relevant content banner on the right hand side of this page.

Images on this page may be reused. However, the name of the author must be attributed along with any accompanying license.

Associated pages, click on the content banner at the top of this page. Scroll down to view.

Flora via links. Click on the links banner at the top of this page. Scroll down to the relevant box. Click this is a direct link to the article. Includes the series Past and Present Medicinal Uses.

All other species of flora that are featured on this site can be viewed by clicking on the relevant content banner on the right hand side of this page. { they are all grouped together}.Flora