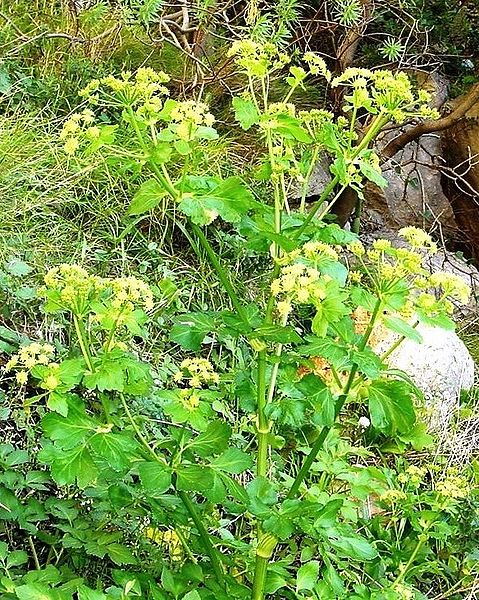 Alexanders belong to the Order of plants known as the Apiales and the family Apiaceae {formerly the Umbelliferae}. This family of plants has some of the most familiar herbs such as Fennel,Carrot, Celery and Parsley. However, it also includes some of our most poisonous plants such as Hemlock, and Hemlock water dropwort.

Here we review a species of that family that has been used in medicinal and culinary preparations for centuries. Alexanders are native to the Mediterranean countries, although it grows wild in many European countries, including Great Britain and Ireland.

They have been allocated the Genus name of Symyrnium and the specific name of olustrium. In older herbals they are sometimes referred to as Black lovage. Because of its poisonous relatives, many of which may be similar in appearance, one has to be very sure of the plants identity before using this plant for internal use. 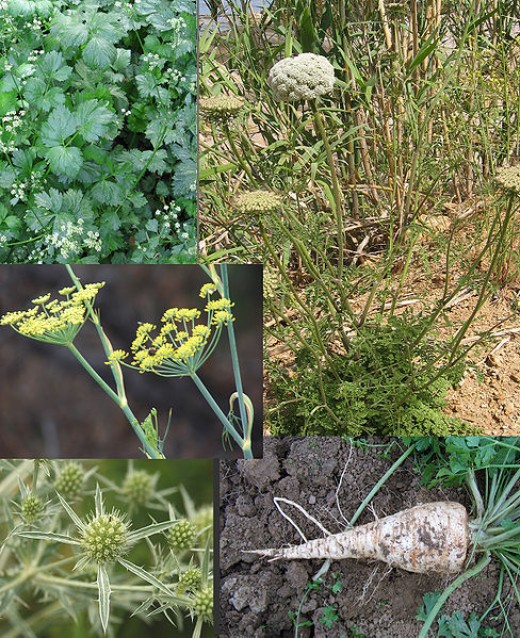 As previously mentioned it is similar in appearance to many other members of this family the root is perennial, large, thick and long. On the outside it is of a blackish colour, internally it is white. The root is aromatic, but somewhat acrid and bitter.

From the root system arise stems that are cylindrical, branched and furrowed, and rises to the height of three to five feet. the foliage of this species are of a bright yellowish-green. The leaves are large which are divided into large, broad leaflets which have large sheaths were they meet the stem. The sheaths are membranous in texture.

The flowers are of a greenish yellow colour, produced in numerous rounded umbels. Each tiny flower have five petals with five stamens. The fruit {seed capsule} is formed of two, nearly globular halves, with prominent ridges. When ripe it is almost black. In this stage of development there acquired the name of 'Black pot herb' from past herbalists. The specific name of the plant olusatrum also derives from this fact from olus indicating a pot herb and atrum meaning black.

They are generally found in waste places by the sea, but not infrequently inland where Monasteries once thrived. It is especially abundant on the western coasts of the the UK. and the south western part of Angelsey. it flowers from May until June and the seeds ripen in August.

It is thought that the plant's Generic name derives from a Greek word indicating Myrrh, in allusion to the scent of its juice,which smells like myrrh, as observed by Pliny the Elder. 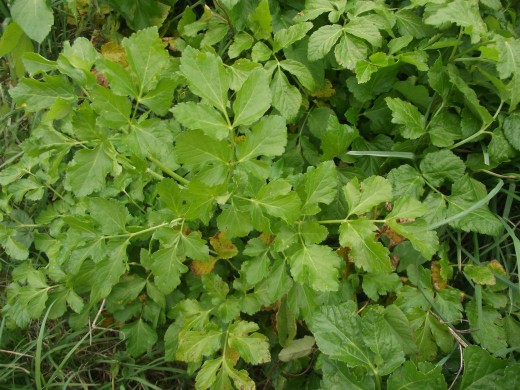 Loveage, is a close relative of Alexanders. The name loveage seems to allude to the plants aphrodisiac properties. However, others maintain it alludes to the Liguria { the Italian Riviera}, where the species was first cultivated. This was also given as a reason for the genus name of Levisticum being a corruption of Ligustikos the then Greek name of Liguaria.

This species has been used in herbal medicine for centuries, particularly the flower heads which contain oil after the flowers have died away. The foliage was said to contain antiseptic qualities, but, it was in fact the root that was reputed to be the most important part of the plant. However, this seems to have been disputed by Culpeper {1600's} who claimed that the seeds were more potent than the roots. he recommended an infusion of the seeds dropped into the eyes would " taketh away the redness or dimness"

This same infusion he recommended as a gargle for sore throats. The leaves, he suggested, should be bruised and cut and mixed with hog's lard to produce an ointment against boils and other skin eruptions. Along with Alexanders this species was recommended in urinary infections. As with Alexanders they were much used in the kitchen during former times, the shredded leaves have been utilized in risottos, in the making of omelettes and regarded as a lush addition to soups.

The young stems were treated like those of Angelica for flavouring and confectionary,uses but was considered inferior to Angelica for this purpose. Loveage is a native to Europe but is found in the north eastern United States and Canada.

Today it is a common ingredient in commercial herbal teas and extracts are used as flavouring for liquers, spice extracts and bitter spirits and as fragrances in a variety of cosmetics. Loveage should not be used during pregnancy .

It should be noted also, that as with many other members of this family that loveage can cause skin rashes when being handled, in their raw state. There are no recorded cases of poisoning as a consequence of using loveage.

The fruits of this species are yellowish brown in colour and elliptical in shape with three prominent winged ribs. 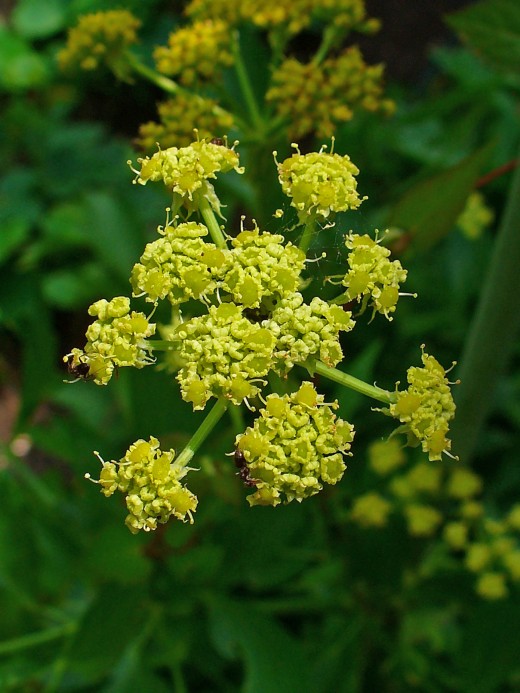 Confusingly , many other plants Have been given the name of lovage as for an example the Scotch Lovage known also as Sea Lovage or Scotch parsley, Black lovage {Alexanders } as previously mentioned. Also a species called bastard lovage a species of an allied genus Laserpitum and water lovage.

When collecting lovage great care must be taken not to mistake it for the water lovage, Oenanthe fistulosa, a very poisonous species. 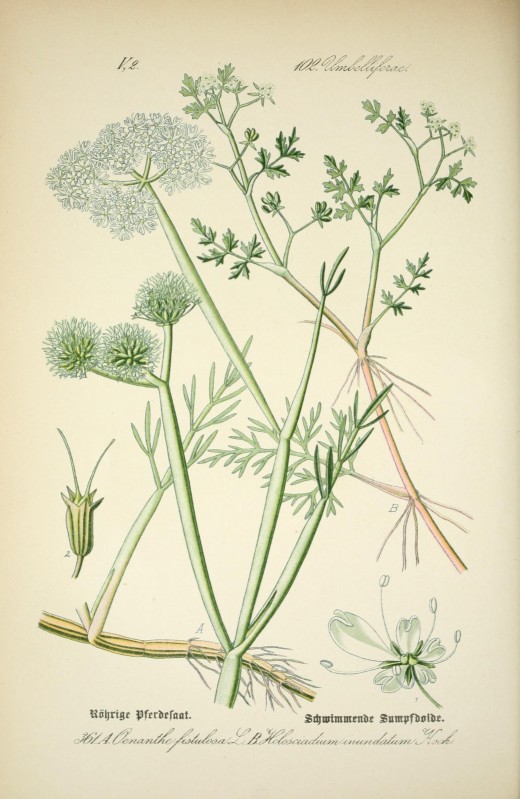 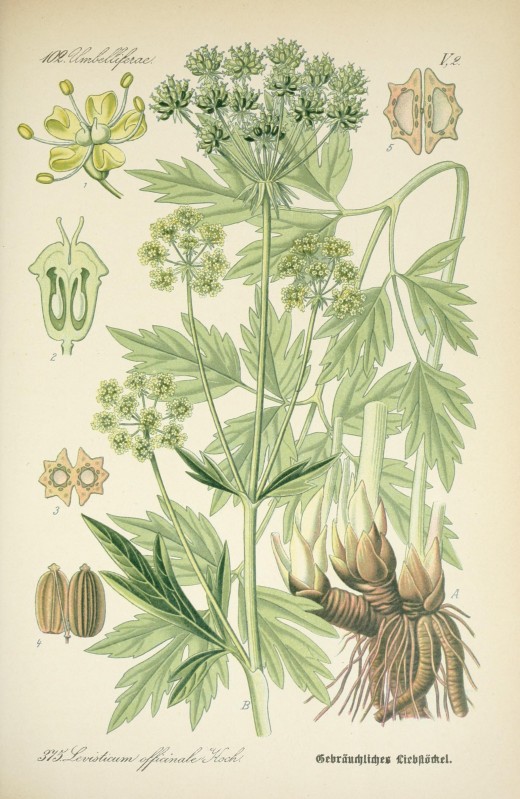 The root and seeds of this plant were said to be diuretic and emmenagogue { increases the menstrual flow }. Dioscorides stated that the latter are good for such as afflicted by dropsy { a condition characterized by an accumalation of watery fluid in the tissues of the body cavity}.

The seeds powdered were reputed to be highly carmative { able to relieve flatulence} , taken in the dose of half a drachm to one drachm { one eighth of a fluid ounce}in a glass of wine, they dispel wind, relieve stranguary { pain excretion of urine, drop by drop,caused by muscular spasms of the urinary tract}, and promote the menses.

The expressed juice of the leaves has been highly extolled as a specific in gravel and diseases of the urinary passages, taken in a quantity of from three to six ounces mixed with white wine.

Culpeper {1600's} conveys to us--" The root, it warmeth a cold stomach and openeth a stoppage to the liver and spleen. It is good in women's courses, to expel after birth, to break wind, to provoke urine, and helpeth the stranguary, and these things the seeds will do like wise. If either of them be boiled in wine, or bruised and taken in wine will also be effectual in the biting of serpents. And you know what Alexanders pottage is good for, you may no longer eat it out of ignorance, but out of knowledge."

However, he went on to say the plant was as useful in the kitchen as in medicine--" You may eat in a raw state as a salad among other herbs, or else boiled and eaten with salt meat, or in broths in the spring season. The root pickled was deemed a good sauce, but its use in the kitchen seems to have been superseded by the cultivation of celery, it is reckoned to be of the nature of parsley or smallage, but stronger"

In the North Western United States the large aromatic roots of Ligusticum filicinum { Colorado cough root } was used to a considerable extent as a stimulating expectorant. This is now referred to as the Fern-leaf licorice root. Another American species referred to as the Colorado cough root is Ligusticum porterii Porter's lovage. This species was once a medicinal plant of the Native American Indians.

The taste of Alexanders is somewhat similar to that of celery. The flowering tops were eaten and cooked in the manner of broccoli. The unopened flower buds can be pickled and when this is done they resemble miniature cauliflowers.

The leaves and young shoots can be eaten raw in salads or cooked and added to soups or stews. The Romans used the foliage and shoots in this manner and it is said that they introduced the plant to Britain because they enjoyed the myrrh taste they imparted to soups. The stem can also be cooked like asparagus being steamed or boiled for five to ten minutes and served as a side dish.

It was recommended that the roots should be left in a cool dry place. Over the winter they would become a little more tender for the use in soups and stews. The seeds have a peppery taste. The flower buds can also be included as an ingredient to salads. 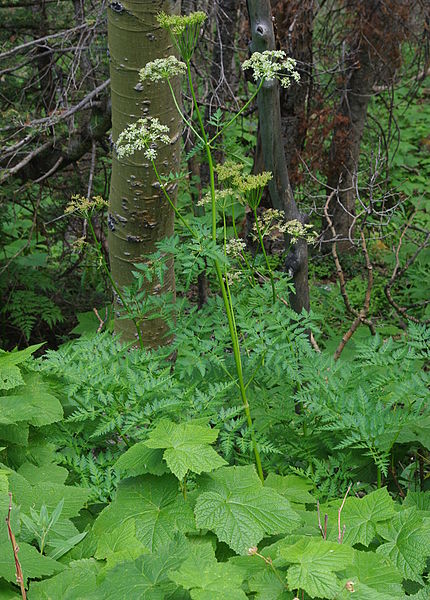