A Look at the Alder and Scorpion flies

This is an insect that owes its common name to past anglers who observed the species whilst in pursuit of their past time. The places frequented by anglers are often inhabited by Alder trees which the insect will take advantage of resting on the bark and foliage by the waterside. otherwise there is very little in the way of striking features to warrant a country name for this insect.

This species has the general appearance of a stone-fly or a caddis fly and may be encountered upon trees { not confined to Alder} and fences near by slow or stagnent water, with its wings folded over its back, forming a ridge that conceals the body. {see photograph above} When the wings are spread there seems to be four of them of a yellow-brown colour and strongly veined {netted}, the hind pair a little smaller than the others. The flight is somewhat laboured and not sustained. Alder flies belong to the Order of insects known as the Megaloptera {megs referring to the large wings} and the Family Sialidae and the genus Sialis

In the larval stage it is a water insect, but unlike some they are not entirely reliant on water, because a moist atmosphere on vegetation is sufficient to sustain it, for a time at least. It is not unusual for it to begin its life as a terrestrial creature, for the female frequently makes the mistake of attaching her egg mass to vegetation at some distance from the water.

However, as the egg mass may contain between 2-3,000 eggs it may be nature's way of weeding out the weak and feeble. It is thought that more than 99% of these must perish either as eggs, grubs or chrysalids if this years generation of flies is not to exceed that of last years.

It is possible if not probable, that the vast majority perish as larvae  are predated before they can reach the water.

The larvae of the Alder fly are shrimp like creatures furnished with a pair of curved, sharp-pointed jaws for attacking the other aquatic animals upon which they prey. The hind body bears seven pairs of jointed filaments and a long un-jointed tail. these serve as gills for oxygenating the blood, for the creatures lack the spiracles or breathing holes of land incescts.

When the aquatic larva is full grown they leave the water and search for a suitable spot in which it can form a cell. Here it changes to a chrysalis which shows the wings and characteristics of the perfect insect.  At this stage it is quite inactive, but after an interval it once more casts its skin and emerges as the Alder fly.

Scorpion flies belong to the Order Mecoptera from the Greek meco-long and ptera -wing and placed in the Family Panorpidae and the genus Panorpa.

Scorpion flies belong to a very curious group of insects of which at least one species must have come to the notice of every rambler. The common name derives from the fact that the male has the last three segments of the hind body so curiously formed and so mobile that they usually carry them curved over their back, when they resemble the tail of a scorpion

But it is not just the tail that is a remarkable feature of the mature insect. At the other end of its body the head is drawn into a long beak and at the tip are small , toothed mandibles. the head also bears a pair of long, slender antennae and two large eyes. The four transparent wings are netted and mottled brown. The legs are long and spiny.

They are very active, carnivorous creatures and may be encountered in bushy places chasing other flies and killing them.  the eggs are laid in a mass in the ground. The grubs are much like those of the Sawfly. On the segments of the fore body they have six legs, but in addition they posses as many as eight pairs of temporary feet on the first segments of the hind part of their body.

before the first change of skin they are covered with numerous spines, but with the exception of the largest of these on the last segment which persist with each change of skin, they are thrown off with the first moult.

The elongated head of the scorpion fly 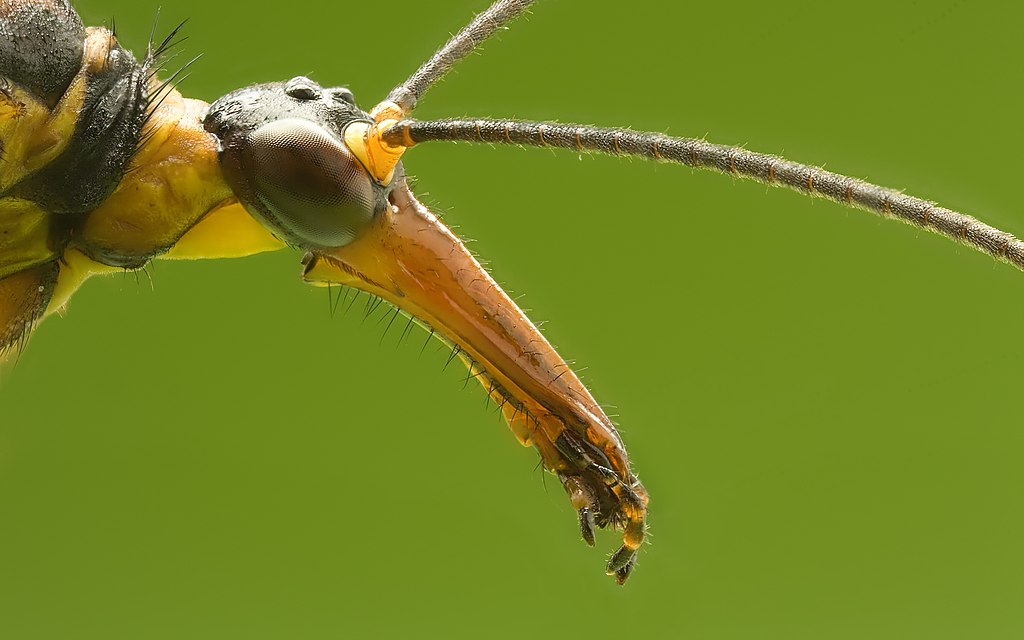 They then bury themselves in the ground, and appear to feed on decaying vegetable and animal matter. There are three native species two of which are relatively common and the third is very scarce.

The images on this page.