Here on this page we look at some of the species that make up the agricultural grasses along with some history as regards agricultural development is concerned. Before  we  look at the species, there are a couple of terms that the reader may find helpful, because they appear in the text frequently.  Aftermath--- this term alludes to the second mowing of a crop or grasses from land that has yielded one crop from the same land earlier in the same year. Culm, is the hollow jointed stem of a grass {or sedge etc. }

The first grasses used extensively for 'artificial' {planted as opposed to natural} pastures was the Rye grass Lolium perenne, {pictured above}, which grew readily on any type of soil and ripens an abundance of seed, and for these qualities it soon became popular. It was introduced into England in about 1667, and both its normal form, and its varieties, known then as Dixon's rye grass,Russel's rye grass and Ruck's rye grass, soon became the favourites of agriculturists.

The rye grasses produced an abundance of seed, which germinated easily and the plants soon arrived at perfection, it was held in esteem as an early herbage. Cattle eat the foliage, however, they tend to reject the stems, and when these are allowed to stand for seed the crop impoverishes the land to a great extent.

Then came the Meadow Cat'stail Phluem pratense began to be appreciated. Dr Richardson of Portrush in Ireland, very early in the 19th century , introduced the Florin grass Agrostis stolonifera, and he attracted general attention with the success he achieved with it. Individual agriculturists had tried experiments with some species at a much earlier date, as for example , in Yorkshire, it is conveyed to us by Marshall, that Hocus lanatus, commonly referred to as the 'Yorkshire fog', was cultivated alone and its seeds were threshed like corn.

However, it was not until the time of Sinclair that the superior qualities of Alopecurus pratentsis, Dactylis glomerata { see grasses two} and Phleum pratense, were fully declared. The first mentioned requires more than two years o reach perfection, but is most valuable when it does get established, both for meadow and for aftermath., Phleum pratense was considered remarkable for its large culm production which are more nutritious than any other grass, but its aftermath is inconsiderable so its principle use was as an hay crop.

Dactylis glomerata was considered excellent for its large production of foliage, which was good for hay, and still better for its aftermath, but  its culms have very little nourishment in them. The qualities of the indigenous artificial grasses were held within their proper place, among the British species, and the following introductions were recommended by Sinclair and others.

Lolium italicum-Italian rye grass. This species was imported annually in seed. it grew freely and was considered to be an excellent meadow grass. Like the allied species Lolium perenne and its varieties, it was better for hay than aftermath. Dixon's rye grass and Ruck's rye grass found most favour with the eminent Agriculturist Francis Blackie Esq

Poa palustris.  Members of the Poa genus are abundantly common 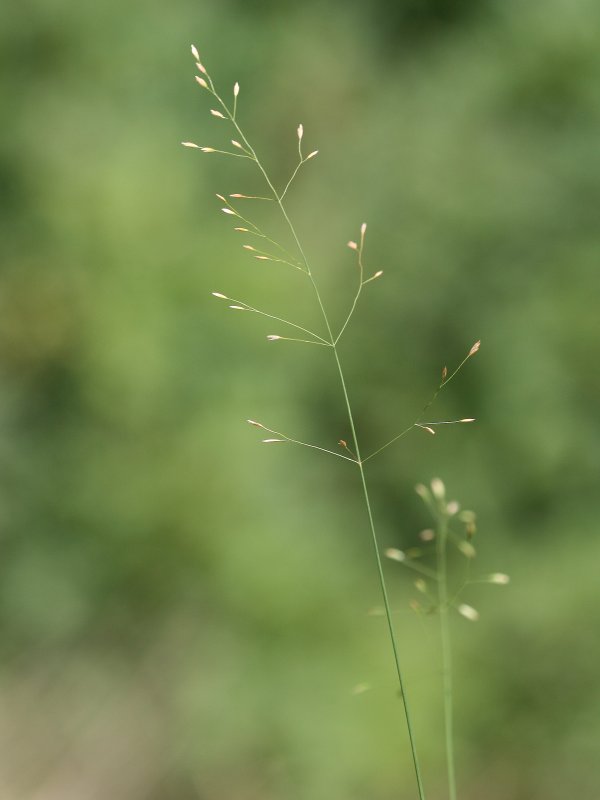 Fertile meadow grass Poa fertilis, is a native of Germany introduced by Mr. Sinclair and at the time greatly approved by him. he considered it next in value to Alopecurus pratensis and Dyctylis glomerata, as it produced nearly as much foliage as they do, and, its substance is of a still more nutritious character especially its aftermath. According to the botanist Host, this grass is indigenous in moist pastures, and about the rivers and ponds in Germany . It somewhat resembles our own Poa nemoralis but has a larger and more spreading panicle, and the spikelets are more oval. It was claimed that hares and rabbits were very fond of it. it grows about one and a half feet tall and produces an abundance of seeds

Poa nervata, the nerved meadow grass was another of Sinclair's introductions, being valued by him for its hardy habit, it kept green and succulent in severe weather, which had nipped the leaves of 300 other species. The draw back to the species is that it only grows at a slow rate thus it is a long time before it reaches maturity. However, he claimed, it does not detract from its value as an ingredient in a permanent pasture. The panicle is large with slender branches. The spikelets are small , green and smooth with five florets in each spikelet. The leaves in two rows spread like a fan, and the culm is compressed . It is a native to North America.

During the 1800's attempts were made to introduce the Chinese sugar cane Holcus sacchartus now Sorghum bicolor, as a fodder grass. it was considered valuable as a food for horses, sheep, pigs and cows. It was recommended that the land should be dug or forked deep and the seed sown in the middle of May. If the season proved favourable three crops could be reaped during the summer so rapid was the growth. It was advised that the seed was sown in rows eighteen inches apart, and half as much space being left between each plant.

Four pounds of seeds were thought to be sufficient to sow half an acre and this would yield three good crops.A dressing of guano and sand was given at sowing time. Cattle eat the plants with relish when they are green. When dried the culms  were found to be full of chrystaline sugar . Any good loamy soil was sufficient for its growth, and the seeds were available from Messrs Sutton, of Reading {southern England}. They advertised their deed in the ' Gardeners Weekly Magazine'

In the Orkney Islands, the Tussock Grass of the Falklands, Dactylis caespitosa, was successfully introduced. It was regarded as being a noble grass, putting up many culms, which were often branched, and attained the height of three to four feet. Its foliage was abundant and contained sugar. The colour was pale and yellowish. However, the species needed sea spray for its well being and therefore was restricted to island and coastal regions.

Poa pratensis was recommended in the admixture of lawn seeds

During the 1800's the Gardeners Weekly Magazine stated " That many of our lawn grasses ought to be called ' weedries ', for early lawn grasses {as it sometimes still the case today} contains daisy,dandelion, plantain, buttercups and other weeds.

A good lawn  is a great acquisition and it requires skill and patience in order to achieve one. the advise given by the magazine is as follows-When first preparing a lawn, the soil must be considered. The fine leaved grasses are best suited for close herbage prefer a light, dry, poor soil and, if the natural soil to be treated is of this description, one point is already gained. However, there is to be moderation in its poverty. The grasses will not bear to poor a soil, and if this is the character the poverty must be corrected by occasional manuring.

They recommended super-phosphate  for preparing a new lawn, or, for putting back life into an old exhausted one, If the condition of the soil is not naturally dry, the ground must be trenched and drained and a new surface of fresh fine soil should be laid. The seeds for sowing lawns had to be carefully selected and the following mixture was highly recommended at the time.--

In the early days of lawn making an article appeared in the same magazine which claimed that The stuff that constitutes the so called 'lawn seed' is only fit to feed sparrows with, but a good clean seed may be obtained from Messrs Wheeler at one shilling per pound"

Mr Wheeler stated " lawns that are becoming patchy may be sown with an admixture of grass seeds in their bald places. But as baldness generally arises from damp or  wearing out, or both, a little draining should be done for the one and some manure be employed for the other"

Mr Wheeler also considered that moss on the lawn was another sign of poverty and suggested that lawns affected with moss should be given a top dressing of guano and soot. Conversely others thought that moss was a ' delight under foot' and felt it was a pity that it was not approved of in lawns.

Mr Wheeler also gave this piece of advise {that still holds good today,}  those that want a perfect lawn. To avoid the annoyance of worms, larvae, insects and ants, blackbirds , starlings and thrushes should be encouraged, for they destroy  the pests and as a consequence bare patches on the lawn will be greatly diminished, where these birds are made welcome.

The images on this page may be reused, however, the name of the relevant author must be attributed along with the License.

All other species of flora that feature on this site can be viewed by clicking on the relevant content banner on the right hand side of this page. {they are all grouped together}

Flora via your search bar banner