THIS SERIES OF PAGES LOOKS AT THE HIDDEN GEMS THAT THE NORTH OF ENGLAND HAS TO OFFER THE NATURALIST. HERE WE VISIT THE WETLANDS AREA OF ABBEY LAKES IN WEST LANCASHIRE. FEATURING THE HIMALAYAN BALSAM AND THE MALLARD.

Start of the tour.

Abbey Lakes is situated amid arable land close to the old village of Upholland in west Lancashire. It accessed from the A 577 A busy main road between the towns of Wigan in the county of Greater Manchester and Ormskirk in West Lancashire. The lake is on the boundary of the two counties and comes under the care of the West Lancashire Countryside Ranger Service.Between the arable land and this small but beautiful lake there are wooded areas which include species such as sycamore, willow, poplar,horse chestnut, ash, rowan,hawthorn, and beech. There is an under story composed of bramble,elder,hazel and rhododendron.

From the A577 There is a small lane right on the border of the two counties which allows access to the small car park. A pathway from the car park takes you through a wooded area with a stream on the left hand side, to the lake.

How tranquil on the eye is a body of water twinkling in the sunlight? Under the  branches of the waterside trees , fish lie in wait  for the numerous invertebrates which may fall onto the shimmering watery surface. Trees in the vicinity of water always have birds about them and this location attracts many species throughout the year..

Photograph  the lake in summer

A Cause for concern

At the southern end of the lake there is an area of woodland with clearings which play host to orchids,angelica, hogweed,{see link} silver weed, marsh thistle and hawk weeds. Of all the species of flora found in this location it is the alien Himalayan Balsam that is causing concern as it is along many water ways and wetlands through out the country. It was first recorded at the site just six years ago, however, it gives the Rangers that look after this site a major problem. Himalayan balsam produces thousands of seed per season that mature in a capsule.

During the autumn the seed capsules explode to scatter seeds over a wide area. Wherever there is water nearby the chances are high that some of the seeds will find their way into the system At this particular lake there is an inlet stream at the southern end and an outlet stream at the northern end. The seeds have a high germination rate and it is not long before the species completely dominates an area at the expense of native flora.

A major concern for the Countryside Rangers is the fact that the outlet stream at the northern end of the lake meanders through the countryside before entering a semi ancient woodland {in the UK this is a rare habitat in its own right} some three miles away. Any seed carried by the stream ,will, in due course of its journey,become embedded in a sandy shallow or muddy projection, where it will germinate.Once the seedling produces a plant that is allowed to set seed another location is invaded. Thus, with a decade the  plants can become established along the entire length of the stream. The worst possible outcome would be an invasion of the semi ancient woodland, where a diverse range of specialized flora would be under threat.

Photographs-- above the seed capsules ripening. Below close up of the flower.

The roots of the plant are shallow and do not anchor deep in to the soil, thus they may be pulled from the ground with out to much effort. The rangers and volunteers have a balsam pulling day before the plant flowers in order to take out as many plants as possible before they can produce seed. However, this as become an annual battle due to overlooked plants or undetected seeds from previous years.                  phots- Dal

Photograph the foot path  leads all around the lake.

During the summer months the trees provide a leafy serenity, a delightful scene in which to participate in the cool stillness of the evening, amid much natural beauty. Water and trees are magnets for birds and the location provides a diverse assemblage of the feathered fraternity. The list is a long one  and includes, Great, Blue,Coal and long tailed tits wren, greenfinch, chaffinch, bullfinch dunnock, greater spotted woodpecker, magpie, carrion crow,jay, jackdaw,wood pigeon,starling, tree creeper, tawny owl,mistle thrush, song thrush, black bird, goldcrest, gold finch, blackcap and king fisher. The latter bird is elusive and secretive and not often seen.

The largest bird that frequents the lake is the grey heron. I have often observed this bird in the early morning period. It has a tendency to stand motionless for long periods, although it is ever watchful for a movement that will activate a lightning strike from its dagger like beak.

Another predator, just as deadly, the pike, waits beneath the waters surface. The pike when full grown is an awesome killer. They are an especial danger to the new born chicks of coot and waterhen and also to new born ducklings. These inexperienced youngsters will be taken from beneath, with only a moments turmoil in the water, to mark they ever existed.

There is a population of mallard that are resident at the lake and they number around sixty birds. The number has not fluctuated over the last 20 years. It is true that during the breeding season that there are many ducklings to be seen and a small percentage  of these will grow into adulthood. However, each January when the count is under taken the familiar total of around 60 birds is the norm. This is down to the balance of nature. For example if two mallards have eight ducklings -a total of ten birds in all, and by the start of January only two have survived { it does not matter which two of ten these are} the balance of nature has been restored. If all ten survived and this breeding success was mirrored by the rest of the mallard breeding population there would not be enough room on the water for the ducks to land, let alone swim around. 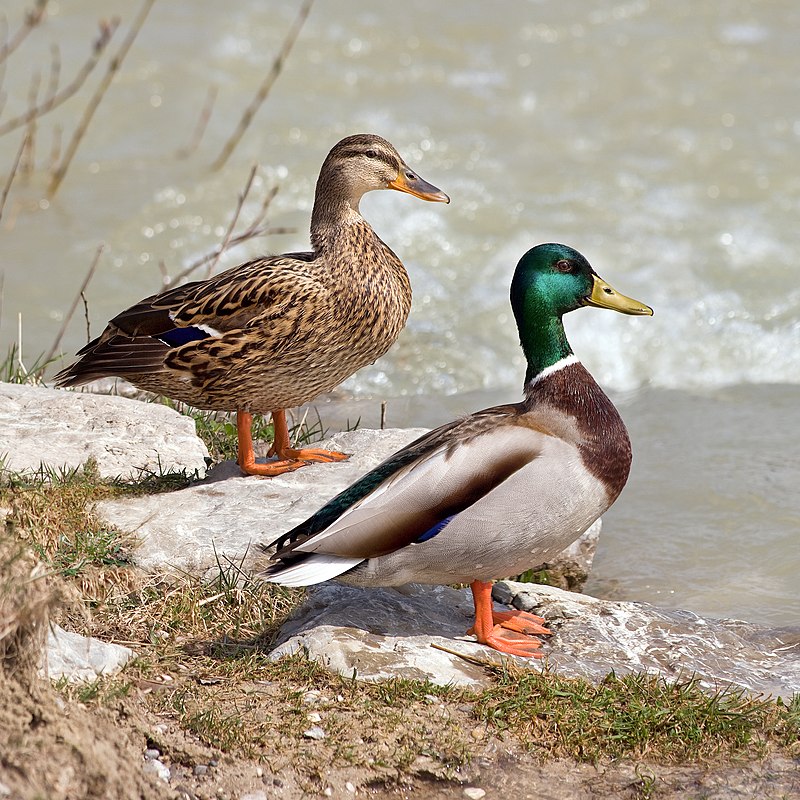 Photograph  above--Mallards are resident at most water bodies

The mallard is the most widespread wild duck occurring across Europe, Asia, North America and Australia. Many species of domestic duck descend from them. However, in a location such as this one the birds are fed regularly by visitors and they have lost their instinctive call of the wild. Everyone is familiar with the mallard so I will dispense with the description  with the exception of when they are in full moult. Locally this occurs during August and September. At such times the males loose their colourful breeding plumage and they appear as dowdy as the females, making it difficult to differentiate between the two. However the bill remains the key feature of identification. The male at all times sports a yellow coloured bill and the female at all times as the brownish colour {see photograph above}.

The mallard has given cause for concern in the U.K. where the number of over wintering birds seems to have declined. The decline first recognized in the mid 1980s is thought to be continuing. However, these counts are taken at coastal wintering grounds and may be misleading. Some experts believe that the birds are now over wintering at local lakes such as this one rather than flying to the coastal feeding grounds. This may be due to the milder winters in general over the last decade.

Mallard are surface feeding ducks which also feed by "up-ending" with its feet splashing energetically to keep its balance in order to stretch its neck under the water to reach aquatic plants. Ducks that feed in this manner are collectively known as dabbling ducks.

Local beauty spots are an oasis in urban jungles and worth conserving for they offer a port in life's stormy seas. An hectic world will hustle and bustle all around them, but while they exist , these havens of tranquility help sanity to prevail and lifts the spirit. 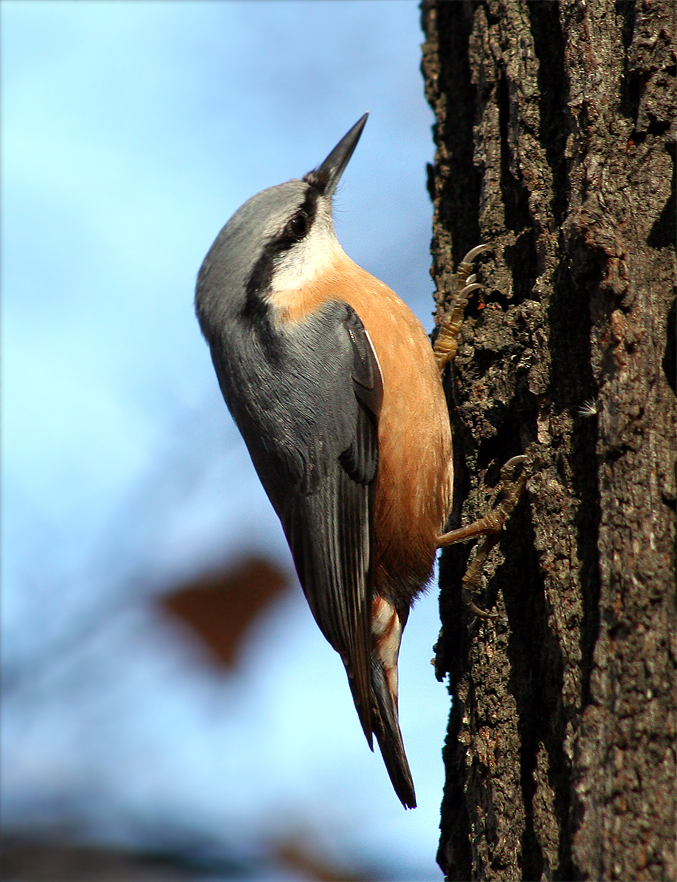 Photographs above--- poplar trees at the site attract bird life; Below the nuthatch is often encountered in the tree tops.

LIST OF FLORA AT ABBEY LAKES BY COMMON NAME.

The list is comprehensive but further species may well be added as they are recorded.

As from January 2017 there is on going work at the site to help in the prevention of flooding. The two outflow culverts are being cleaned out improved and  made safer than before by barriers. The footpath that runs around the eastern side of the lake is also being raised to help with flood prevention.

While this work is being carried out the car park will be being used to  park necessary machinery and therefore will be locked at night and at weekends. Pedestrian access will not be affected.

Photographs on this page are by Dal